The veteran MP on why it's important for Canada to have a gender-neutral anthem, and on pushing legislation while fighting ALS 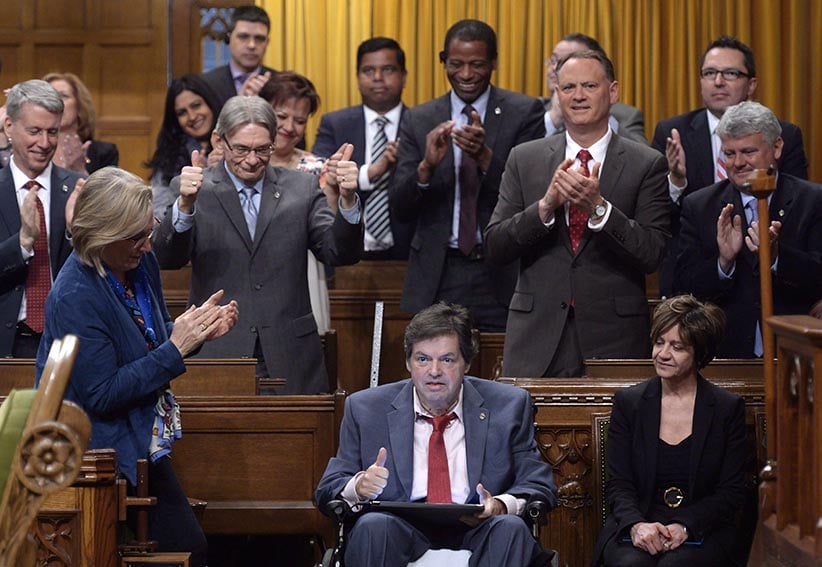 *This story has been updated to reflect the current status of the Bill C-210. Mauril Bélanger updated some of his responses and answered more questions at the end.

“In all of us command.” It’s a subtle change to Canada’s anthem—just two words—but it’s a subtle change with big meaning for veteran MP Mauril Bélanger. Bill C-210, an Act to amend the National Anthem Act, is now awaiting Senate approval. And if it passes, would make “O Canada” gender-neutral by changing “thy sons” to “of us.”

But with every day the bill isn’t made law, the health of the 21-year Ottawa-Vanier MP deteriorates a little bit more. Late last year, 60-year-old Bélanger shared his diagnosis of amyotrophic lateral sclerosis, or ALS, a fatal neurological disease, and has since lost his ability to speak. He answered some of Maclean’s questions about the bill and his vision for gender equality in Canada, via email.

Q: Who or what inspired you to push for this change?

It is in the interests of fair treatment of both genders that I proposed Bill C-210, an Act to amend the National Anthem Act (gender). With my bill, I want to pay tribute to all the women who have worked and fought to build and shape the Canada we know today. My bill proposes a simple change in the English version of our anthem. It proposes that “True patriot love in all thy sons command” become “True patriot love in all of us command.” Changing only two words, “thy sons” to “of us,” gives Canada an inclusive anthem that respects what we were, and what we have become, as a country.

Q: What does the anthem mean to you?

To me, the anthem is a very powerful symbol. As Canadians, we continually test our assumptions, and indeed our symbols, for their suitability. Our Canadian maples have deep roots, but they also have continual new growth, reaching to the sky. Our anthem too can reflect our own roots and our growth.

Q: Describe the reaction you’ve received since the bill passed through the House of Commons

I was delighted with the overwhelming support for my bill in the House of Commons, but I was also pleased to note that it drew support from all parties. This gives me confidence that an increasingly independent-minded Senate will treat the matter with all due consideration. The fact remains that there are Canadians from coast to coast to coast in support of the change being advocated with this bill. A new Mainstreet Research poll conducted on May 11, 2016, finds 62 per cent of Canadians would support changing the anthem to be gender inclusive – with 2,027 respondents the poll has a margin of error of plus/minus 2.18 per cent, 19 times out of 20. I truly believe Canadians are now ready for an inclusive national anthem.

Q: Why do you think it’s important for Canada to have a gender-neutral national anthem?

I think it is indeed very important. Here is a bit of history on the matter to justify this view. The National Anthem Act was introduced, passed, and given royal assent, all in the same day, on June 27, 1980, but the lack of inclusiveness of the English version was noted and discussed. A commitment was given that time would be devoted in the following session to further considering “O Canada,” including in particular the words “thy sons.” Unfortunately, it did not happen then. Let’s make it happen in 2016.

On the eve of celebrating the 150th anniversary of our Confederation, it is important that one of our most famous and popular national symbols reflects the progress made in our nation in equality between men and the women. These advances, sometimes slow and difficult, have marked the history of our country. They should be celebrated in our national anthem.

Q: What could the passing of this bill mean for future gender equality in Canada?

It would no doubt be a powerful symbol for current and future generations. Our anthem should not ignore the increasingly important contribution of 52 per cent of our population. We have come a long way. The strides made by women in our society have been significant and should be fully recognized. Much remains to be done and Canadians are determined to see realized the dream of true equality between the genders. We are in 2016!

Q: You’ve said you wanted a simple change and a gender-neutral change. Would you be happy with the alternative—“all our hearts command”—that’s been suggested?

The English version of our anthem has been changed before. Indeed, my strongest argument for many Canadians is that I am reintroducing “us”—a gender-neutral word that was there from the beginning. The second line of the original English version of 1908 reads “True patriot love thou dost in us command.” Then, in 1913, the line was changed to “True patriot love in all thy sons command.” Many believe the change was in response to the increased militarism in Europe leading up to the First World War and an assumption that only young men would carry our national banner and pride into battle. Of course, both men and women from Canada proudly took part in the First World War. Canadian women served, not as soldiers, but in other functions—especially as nurses—and many died doing so. Since that time, women have served in combat roles and in 2006, in Afghanistan, Nichola Goddard became the first female Canadian soldier to die in combat.

I believe I can make the case for returning to the original gender-neutral approach by reintroducing a word that was already there, but it may be difficult to convince those who are wary of any change to contemplate a new word, such as “hearts,” however elegant it sounds.

Q: This is the second time you’ve brought the bill to the Hill, and this time it passed the second reading. What do you think that says about this country and where it’s at compared to this time last year?

As this is the second time I bring forward this legislative measure in the House of Commons, the public is now more aware and supportive. This is evident from the amount of correspondence from the public I received in favour of the proposed change, in comparison to my earlier attempt.

Q: Describe your experience spearheading this bill while battling ALS.

It is certainly more challenging but I remain very determined to make this happen.

Q: Is there any fear that the progression of this bill will be slowed?

Q: This bill is being called your “legacy.” What other legislation/work would you like to be remembered for?

I would say that the most important issue for an MP is to defend the interests of the people living in his or her constituency by working together with the community and with other levels of government to help ensure the highest quality of life for all. Through my daily efforts and that of my assistants over the past 21 years, I have provided assistance to more than 10,000 residents of Ottawa-Vanier with cases such as immigration, taxes, citizenship, work, housing and pensions. This is what I am the most proud of.

Also, I would like to point out that I personally worked tirelessly to promote Canada’s linguistic duality and respect of the Official Languages Act. For example, as minister responsible for official languages, I strongly advocated for the successful passage of the late Jean-Robert Gauthier’s bill S-3 before the 2005-06 general election was called. Waiting until after the election could have resulted in abandonment of this worthy initiative. The successful passage of S-3 meant that the legislation now contains an obligation to act, requiring the government to adopt positive measures to develop official language minority communities. To me, this is a highlight of my career.

Q: How did it feel when your fellow MPs rose to applaud you and began singing ‘O Canada’ after the bill passed through the House of Commons?

It was very moving, and I deeply appreciated the gesture as well as their on-going support.

Q: Are you worried at all about the Senate exercising its new independence and not approving the bill?

I am delighted that the Senate is exercising the independence of thought that, as Liberal Leader, Mr. Trudeau hoped to instill when he first removed Liberal Senators from the caucus, and more recently when, as Prime Minister, he appointed new independent Senators. I am confident that the Senate will recognize the value of a gender-neutral anthem, as well as the appropriateness of returning to language used in the 1908 version. I especially want to thank Senator Nancy Ruth for taking on the responsibility of sponsoring my bill in the Upper House.

Q: This change has brought up a lot of debate over other lines in the national anthem, including issues with the cross in the French version. Do you think your bill will bring about more changes to the anthem in the future?

Canadians are very talented and I know that some of them would be delighted to have an opportunity to rewrite the anthem in a variety of ways. Others are reluctant to alter so important a national symbol. Despite the enthusiasm of a few, I cannot imagine that the adoption of this small but highly significant change in the English version of our anthem would amount to declaring open season on rewriting it in either French or English.