Paul Wells: For years, Maxime Bernier cheerfully flew the Tory banner—even when his own ideas clashed with the party line. As he quit the party to start his own, it's not clear he's leading a serious movement. 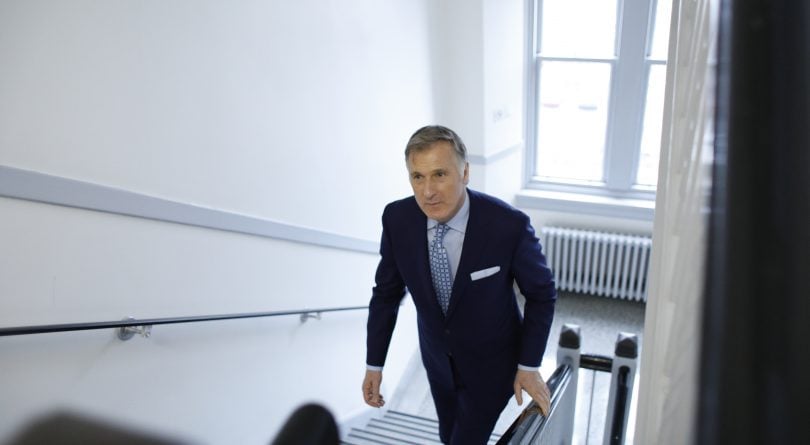 Conservative MP Maxime Bernier in his Confederation Building office in Ottawa April 4, 2017. Bernier is running for the CPC leadership with a Libertarian agenda. (Photograph by Blair Gable)

At least now we’re all reminded why he’s so fond of Twitter. “If we want conservative principles to win the bottle of ideas, we have to defend them openly,” Maxime Bernier told a room full of reporters, “with passion and conviction.”

I checked his prepared text, which had been handed to us minutes earlier. “Battle of ideas,” it said. Of course it would be unfair to make fun of a guy for being shaky in his second language. Anyone who’s heard me on Radio-Canada would know I’m in a glass house here. But still. HE SAID BOTTLE OF IDEAS. Let’s just go with that.

For years, Bernier clearly believed his bottle of ideas was half-full. He had run cheerfully as a candidate for the Conservative Party of Canada in 2006, 2008, 2011 and 2015. He ran for the party’s leadership in 2017. But now everything had changed.

IN HIS OWN WORDS: Why Maxime Bernier is leaving the Conservative Party

“I still cannot understand how a party that is supposed to defend free markets supports a small cartel that artificially increases the price of milk, chicken and eggs for millions of Canadian consumers,” he said. On multiculturalism, “Do we want to emphasize our ethnic and religious differences, and exploit them to buy votes?” How could it be that, “when the Liberal government recently renewed the unfair and inefficient equalization formula for another five years, I was the only one to criticize it”?

“I have come to realize over the past year that this party is too intellectually and morally corrupt to be reformed,” he said, referring, in case there is any confusion, to the party he was here to announce he was leaving, his own Conservatives. And he would indeed have had to take the measure of the depth of its depravity over the past year, because on each of the four occasions he ran as a Conservative candidate, its policies included support for supply management, vigorous and increasingly productive flattery of assorted immigrant voter communities, and rough continuity on equalization.

Bernier’s frustration with these policies—to be fair, in some cases it’s hard to dignify some of them with the term “policies;” these techniques, maybe—was easy to contain until he narrowly lost a leadership campaign. Then it all became too much to bear. Sure, he’d run on this stuff four times. Sure, before that he used to work for Bernard Landry, the former Parti Québécois cabinet minister who is to libertarian ideals what Axl Rose is to opera.

No one of us should begrudge the man his leisurely learning curve, for all have sinned and fall short of the glory of God. What mattered was that he was here now, to form a new political party, although he forgot to put that part in his prepared remarks. He did mention it in his first answer to the barrage of questions from reporters.

RELATED: Conservatives can win if they take aim at Liberal incompetence—not the culture wars

Andrew Scheer’s Conservatives are too obsessed with strategy, he said.

Well, what’s your strategy, he was asked.

I’m not really thinking about strategy, he said.

Yes, but strategically, do you think it can work?

I’m not trying to figure out what will work, I’m here to advance ideas.

Yeah, but do you really think you can beat Andrew Scheer?

And so on. Some other reporters discovered that it was fun to ask, instead, about Bernier’s bottle of ideas. Turns out that for today it was half empty. He accuses Justin Trudeau of “extreme multiculturalism.” What has Trudeau done, in terms of government action, that betrays such a tendency? Bernier’s Twitter followers are not normally shy about coming up with examples, but the new leader was, for today, shy. “I appreciate your question,” he told the reporter, “and we’ll have time to discuss that.” But later.

I asked, since he’s the ideas man, what his ideas are for stemming the flow of border crossers at the Quebec and Ontario borders with the United States. He referred me to the immigration section of his website from his leadership campaign last year. Here it is. I invite you to find solutions to Canada’s porous border in it. Will Bernier set up a card table at Lacolle to inquire whether passing newcomers intend to start a business?

We will, I suppose, have to stay tuned for more details. At the risk of discussing strategy, I’m not sure Bernier has much. Many other MPs hoping to influence events would have been delighted by the approach of a national policy convention in the party they had represented for more than a decade: getting supporters to fan out, sign up more supporters, stack riding meetings, influence dozens of local policy processes would have been work, sure, but it would not have been doomed to failure. Failing that, an MP seeking to launch a national movement of rebellion might have lined up 20 or so supporters to make sympathetic noises on Facebook, Twitter and local news to amplify the effect of a lonely afternoon newser in Parliament Hill’s second-largest press room. But no.

Movements based on ideas have become influential in Canadian politics many times. In Bernier’s lifetime, those have included the Parti Québécois, Reform, the Bloc Québécois and others. Each required startling amounts of work, little of it glamorous, from people who were not only willing but eager to get their hands dirty for the purpose of advancing a cause. Such genuinely influential movements have lately been outnumbered by legions of social-media blowhards and crowdfund hucksters. Bernier now has all the freedom in the world to show everyone which side of that divide he’s on.