Maybe a new pipeline could win federal approval after all

Beneath the war of words between Alberta and Ottawa, draft guidelines suggest climate-change factors won't block all big resource projects 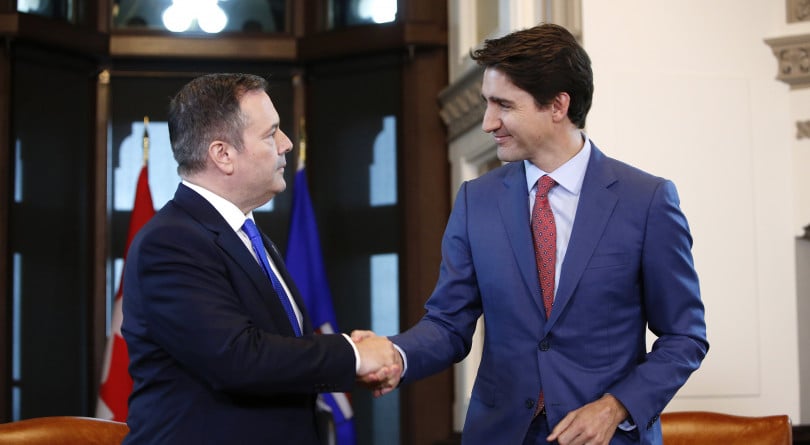 Kenney shakes hands with Trudeau on Parliament Hill on May 2, 2019 (David Kawai/Bloomberg via Getty Images)

Take a quick scan of Alberta Premier Jason Kenney’s ideas for how Prime Minister Justin Trudeau might make peace with the oil sector, and some items quickly fall away. For instance, Kenney isn’t going to have any say in appointing Trudeau’s next environment minister, and his helpful suggestion that it not be the current one, Catherine McKenna, only makes it more likely she’ll keep the job. His call for the Liberals to adopt federal Conservative Leader Andrew Scheer’s idea for a national energy corridor—a notion that has always seemed like a reach, given inevitable opposition in some provinces—isn’t much more practical.

It’s worth pausing, though, over Kenney’s call for Trudeau to repeal or radically revise Bill C-69, the law passed by the Liberals last June to update the way big resource projects, including pipelines, are evaluated, and finally approved or rejected. Of course, there’s no chance the Liberals will dump the legislation outright or gut it. Still, key aspects of the way the act is implemented remain very much in play. It’s the sort of fine-tuning of a freshly enacted law that usually matters only to bureaucrats and lawyers. But the tension right now between Ottawa and Alberta makes the details of how this particular law comes into force anything but routine.

Alberta’s Conservatives couldn’t be more emphatic about their opposition to C-69. Kenney said the law “creates profound uncertainty about getting any major investments or projects approved.” The federal Liberals claim the opposite—that it clears up past uncertainty around project assessments that allowed environmental and Indigenous groups to delay them through protracted court actions. “These better rules,” McKenna has said, “are designed to protect our environment while improving investor confidence, strengthening our economy, and creating good middle-class jobs.”

READ MORE: Western separatism is not a serious option

Who’s right? University of Calgary law professor David Wright said there’s nothing in C-69 that justifies making it a “lightning rod” for Western alienation. But Wright added in an interview that industry has some grounds for worrying that it might open the door to new sorts of legal challenges. For instance, the law specifies that an impact assessment must take into account “the extent to which the effects of the designated project hinder or contribute to the government of Canada’s ability to meet its environmental obligations and its commitments in respect of climate change.” One way to interpret this new requirement is that project might be rejected solely because it would generate a lot of emissions.

But Wright said draft guidelines the federal government is now circulating show that’s not what the Liberals have in mind. They propose that a company pitching a new pipeline, say, or a mine expansion, would have to tally up future emissions from the project. Those emissions, however, wouldn’t have to be squared with Canada’s overall emissions-reduction commitment under the UN Framework Convention on Climate Change. “All you have to do to pass muster is some straight arithmetic about emissions your project will result in,” Wright said. “As long as you’ve done that, that’s handed over to cabinet to make a decision.”

Take that process a step further, though. Let’s say the federal cabinet approved a project even though it came with lots of emissions. Wouldn’t that open the door to court challenges from environmental groups on the grounds that the law specifies that climate change must be considered? “You’ll hear that argument,” Wright said. “You might even see that case emerge.” However, he said the draft guidelines leave plenty of decision-making leeway for the new Impact Assessment Agency and, ultimately, the cabinet, and any judge is likely to be deferential. “At the end of the day, the court is going to be sympathetic with cabinet wrestling with climate plus considerations like the economy,” Wright said

How the climate-change clause is implemented is just one of many questions about C-69 that must still be sorted out. “As the guidance and regulations come out, industry may become less fearful,” Wright said. Although he is skeptical that industry will find the new law anywhere near as tough as Kenney suggests, he added that there might be no avoiding legal challenges from environmental groups and perhaps Indigenous communities in the early stages. “For one or two years, there may be some initial testing of the act in court,” Wright says. “In five or 10 years, it may be just fine.”

The oil sector has taken such a hard line on C-69 all along that it’s hard to shift now to talking about regulations and guidelines as a partial answer. Tim McMillan, president and CEO of the Canadian Association of Petroleum Producers, said the issue has to be seen in light of the deep national divisions exposed by the Liberals’ failure to win a seat in the recent federal election in oil-producing Alberta and Saskatchewan. “We are now at a point where this bill is law, and we will work with the government to get the best outcome possible,” he said. “But, to be honest, I don’t think anyone is thinking that there’s a tweak to a regulation inside that bill that has any effect on those divisions.”

McMillan said Trudeau can’t expect to earn credibility even by finishing the expansion of the Trans Mountain pipeline, which his government bought last year for $4.5 billion. Although the project was already approved under the process in place before C-69, a Federal Court of Appeal ruling issued early this fall is allowing six more court proceedings to go ahead, revisiting how the government consulted with some First Nations. Even assuming that legal loose end doesn’t prove to be too serious, McMillan said Western Canadians won’t be impressed if Ottawa only succeeds in “getting a project completed years after its original in-service date, after the private sector has walked away.”

And he predicted his industry’s worst fears about C-69 will not ease as regulations and guidelines around the law take shape. “From our industry’s point of view,” he said, “when we look at an important project that could create jobs for all Canadians, we ask, could that project, if it’s of a high quality and environmentally sustainable and safe, be brought forward by an investor knowing the regulatory system that now exists? The answer is no.”