Maybe Harper has slain the separatists 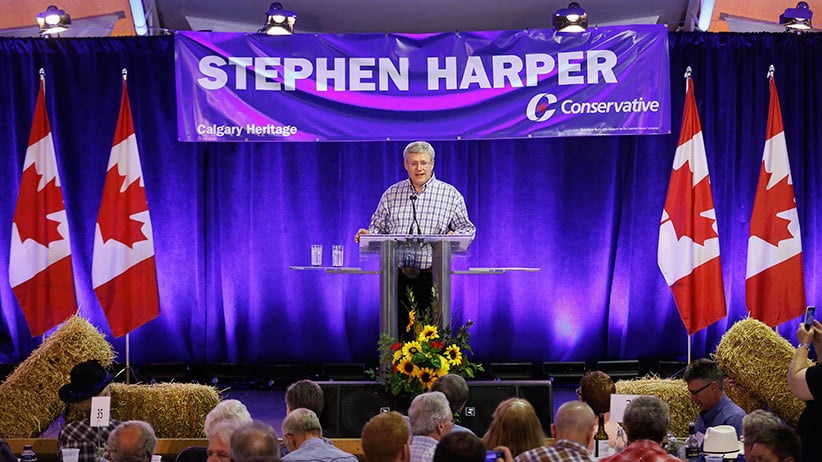 Nobody should be surprised that it makes headlines when the Prime Minister uses a speech to a friendly audience in his riding to assert, in almost a dozen different ways, that the leader of the third party has “nothing—absolutely nothing—of substance to offer.” We are essentially already in the 2015 election campaign, and it’s Trudeau’s party that leads the polls, and you bet that makes Stephen Harper angry.

But blanket coverage of one part of a speech can obscure discussion of the rest. I’m struck, for instance, by Harper’s decision to take credit for the decline of the Quebec sovereignty movement.

Perhaps you are saying, “He did what?” And yet it is so.

This year marks the 2ooth anniversary of Sir George-Etienne Cartier’s birth, Harper said. Cartier was one of the key fathers of Confederation, the right-hand man to Sir John A. Macdonald. “How very encouraging it is that as we commemorate Cartier’s vision—his Conservative vision of a strong Quebec in a united Canada—we do so soon after an election in which the people of Quebec rendered the most decisive verdict for federalism in four decades!” Harper said.

“Friends, the gradual decline in Quebec separatist sentiment throughout the stewardship of our government—a government which has honoured Cartier’s principles—is something we should take pride in!”

Take pride? Sure. Perceive a causal link? That one’s harder. How can a party that rarely scores as high as 15 per cent in public opinion polls in Quebec take credit for the routs of the Bloc Québécois in 2011 and the Parti Québécois in 2014? A party that holds five seats out of Quebec’s 75, with no guarantee of hanging onto them after the next election?

And yet I think Harper has a point. If the Parti Québécois had won a record-high vote in the spring election and the Bloc had moved from four seats in 2004 to 54 today, Harper would come in for his share of the blame. The opposite has happened; should he get no credit?

He has certainly followed his own counsel on Quebec. One of his first moves, in 2006, was to eliminate federal funding for the Canadian Unity Council, which for 40 years had served as a Montreal club for well-meaning apparatchiks of the Laurentian elite (its last board chairman was Bob Rae). He introduced a motion recognizing “the Québécois” as a nation in the House of Commons. He gave Quebec a representative in the Canadian delegation to UNESCO. He travelled to Quebec City to meet the Quebec premier, becoming, amazingly, the first modern prime minister to bother to do so.

All this got Harper noticed in Quebec, and it won him some early support. Since 2008 that support for his party has almost all slipped away. Almost any Quebecer can list irritants in Harper’s relationship with the province: his insistence on handing senior appointments to unilingual applicants; his policies on the environment and criminal justice. Yet disdain for his government is not matched with disdain for Canada.

That’s because he’s also done big things differently from his Liberal predecessors. Jean Chrétien and Paul Martin cut transfers to the provinces, then restored them only in part, and only in return for substantial federal involvement in provincial decision-making. Under Harper, federal cash transfers to provinces continued to grow, while conditions on those transfers nearly vanished. A generation ago, the failed Meech Lake accord was designed to limit new national shared-cost programs. Under Harper there have been no new national shared-cost programs. The intense executive federalism that had become characteristic since the 1960s, with high-stakes federal-provincial meetings almost every year, has been replaced with mutual federal-provincial indifference.

I kind of liked it the old way, when “strong federal leaders” were forever “standing up for Canada” in near-constant confrontations with Quebec premiers, both Péquiste and Liberal. Those were the days when a letter from Stéphane Dion to some PQ personality could brighten the entire press gallery’s day. Harper’s way is more boring. But there is all kinds of evidence that he’s robbed the separatist fire of oxygen.

“Every prime minister of modern times has had to come to terms with the fact that the unity of the country can never be taken for granted,” Bob Rae wrote five months ago. “The case for Canada has to be made every day, every week, every month.” By Rae’s lights, Harper has consistently failed to make the case for Canada. And yet the rout of Quebec separatism is nearly complete. Isn’t that one of the most surprising things that could possibly have happened on Harper’s watch? Is it not at least worth acknowledging?