Politics Insider for January 16: Svend Robinson seeks end to political purgatory, the war of the travel advisories, and Theresa May's government faces a vote of no confidence after historic defeat of Brexit deal 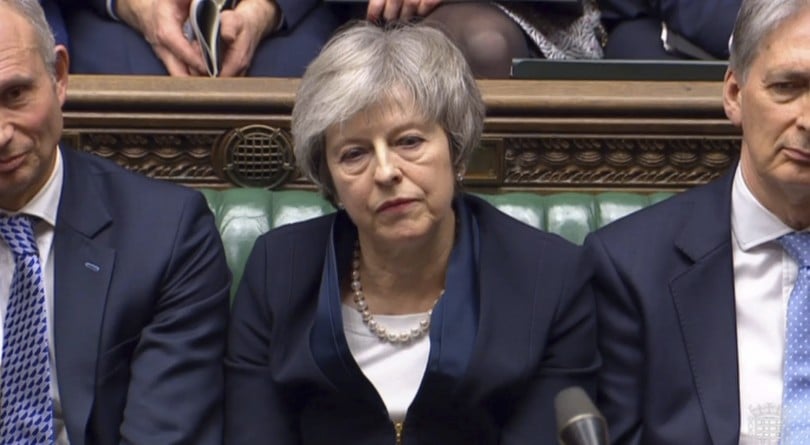 British Prime Minister Theresa May listens to Labour leader Jeremy Corbyn speaking after losing a vote on her Brexit deal, in the House of Commons, London, Tuesday Jan. 15, 2019. (House of Commons/PA via AP)

During her time as Indigenous services minister, Jane Philpott won respect from Indigenous leaders. Now Seamus O’Regan, friend-of-Trudeau and target of much criticism in his old role as Veterans Affairs minister, must try to fill her shoes. Needless to say, not all Indigenous leaders are thrilled with his appointment:

“I’m a little disappointed, mainly for selfish reasons,” says Grand Chief Arlen Dumas of the Assembly of Manitoba Chiefs. “Minister Philpott brought a breath of fresh air into the relationship that we had with the federal government and was truly willing do things in new ways.”
…
O’Regan steps into the role during a tenuous time between Indigenous people and Ottawa—this after the RCMP raided a camp held by a clan of the Wet’suwet’en in northern B.C., who were protesting a proposed gas pipeline on their traditional territory. “There’s been some unrest and some discord,” Dumas says, adding that despite the unfavourable comparisons between O’Regan and Philpott, he doesn’t believe the new minister “comes without any skills.” (Maclean’s)

This month’s print issue of Maclean’s duelling back and front cover stories features examining Canada’s entrenched partisanship from the perspective of the left and the right. Rick Smith of the Broadbent Institute argues the two sides don’t share equal blame for the sad state of politics in Canada:

On all of the major questions facing humanity today—climate change, inequality, defending and deepening pluralism in an age of globalization —the left is working to find answers. True, in some areas we are still coming up short. For all the achievements of left movements in the 20th century, from the welfare state to universal healthcare to progressive labour legislation, inequality remains a deep and abiding fact of Canadian life. Despite successfully making the environment a major issue of public concern, there is still much work to be done if we are to avert the coming climate crisis. Racism and the discriminatory treatment of racialized Canadians are still tragic realities, human rights and equity laws notwithstanding.

Challenges like these and the moral necessity of tackling them is precisely what animates today’s left in Canada and abroad. Yes, their urgency may inspire impassioned, even angry critiques of the political status quo and what can sometimes be difficult, needlessly fractious debates within our own ranks. Some believe this makes the left and right fellow travelers amid the ongoing crisis of liberal democracy. Nothing could be further from the truth.

At least one poll shows NDP leader Jagmeet Singh with a comfortable lead in the Burnaby South byelection. The survey by Mainstreet Research gave Singh 38.8 per cent support, ahead of Liberal Karen Wang at 26.3 per cent and Conservative Jay Shin at 22 per cent. Conservative strategists were no doubt focussed on the fourth place position of Laura-Lynn Tyler Thompson of Maxime Bernier’s People’s Party. She held 8.7 per cent support, which if that had gone to the Conservatives would have catapulted the party into second place. Says Mainstreet’s president and CEO Quito Maggi: “The People’s Party at this stage has significant support and is likely peeling support away from the Conservatives. If the People’s Party is still this strong coming into election day, the Conservatives will have no chance of winning.” (Burnaby Now)

Canada has asked China for leniency in the case of a Canadian convicted of smuggling drugs into that country and sentenced to death during a hastily-arranged retrial.  Foreign Affairs Minister Chrystia Freeland said Canada has spoken with China’s ambassador “and requested clemency.” (CTV News)

There won’t be a winter caucus meeting for NDP MPs ahead of the next parliamentary sitting at the end of January. Instead the party is deploying its MPs to get Singh elected in Burnaby. “Most, if not all, of the B.C. caucus and others will be going out to help out Jagmeet,” one NDP MP told the CBC. “All of this hinges on what happens in Burnaby.” (CBC News)

While Singh battles for Burnaby South, an old familiar dipper face is campaigning in the riding of Burnaby North-Seymour. Svend Robinson hopes to return to politics, 15 years after the theft of a pricey diamond engagement ring ended his political career: “I am asking the people of Burnaby North-Seymour and Canadians to judge me not on the basis of one serious mistake 15 years ago, for which I paid the price, but to judge me for my lifetime of service to my community, to my country and for the past decade, internationally.” (Canadian Press, Twitter)

Theresa May’s Brexit plan suffered a deafening defeat Tuesday. Her deal, which laid down the terms of Britain’s exit from the European Union in just 72 days, was shot down, with 432 MPs voting no, versus just 202 who voted in favour of the deal. Labour leader Jeremy Corbyn tabled a vote of no confidence in the government, which is set to take place at 2 p.m. ET today. Here’s the moment when the vote was announced and Corbyn called for the no confidence vote. (BBC News)

A no-confidence vote doesn’t necessarily mean an election would happen right away. Nor is it certain to carry, despite May’s thrashing on Tuesday. The Guardian provides a good synopsis of what happens today depending on how the no confidence vote unfolds. Meanwhile this roundup of newspaper front pages in the U.K. says it all: “A Complete Humiliation,” “No Deal… No Hope… No Clue… No Confidence,” “Brextinct: May’s Brexit Deal as Dead as the Dodo” (The Guardian)