Michael Wilson on how Canada can matter in Washington

The outgoing ambassador to the U.S. says Canada must think and speak on “a global basis” 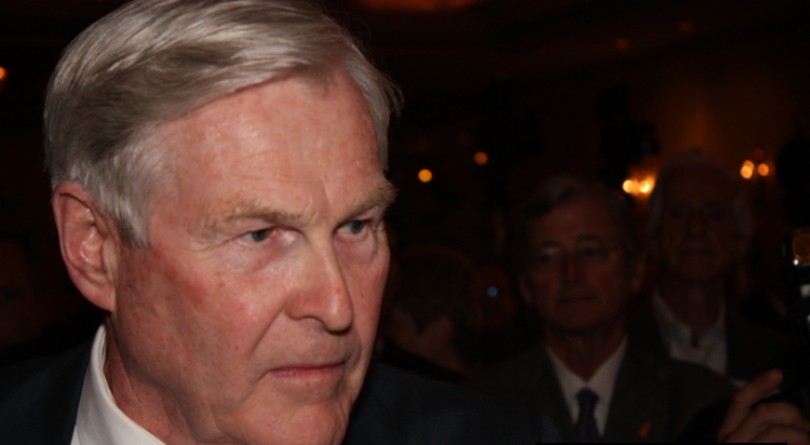 Today’s issue of Maclean’s features an interview with Michael Wilson, Canada’s outgoing Ambassador to the United States. I interviewed Wilson by telephone a few days ago about his nearly 3 ½ years in Washington, after last week’s surprising appointment of just-resigned Manitoba premier Gary Doer as his successor.

Wilson is no showboat. I couldn’t lure him into talking about Washington-after-hours, which was so much the story of Canada’s D.C. mission back in the 1980s, when Allan Gotlieb was ambassador there. But if Wilson wasn’t dishing on the social swirl, he was bracingly interesting on weightier questions about how Canadians can make an impact in the world’s most competitive diplomatic environment.
In particular, he didn’t hesitate to warn that by pulling out of combat in Afghanistan in 2011, as planned, Canada will lose what has been “the best calling card” he had when it came to winning a respectful hearing from the Americans, whether Republicans or Democrats.

He emphatically, repeatedly suggested that the federal government and Parliament “will have to address” the issue of how to manage the withdrawal so that it doesn’t hurt Canada’s reputation, not only with the U.S. government, but within NATO. He was diplomatic enough to stop short of advising the decision be revisited, but he did say Ottawa should consider other security missions abroad to maintain the standing Canada has won through its military commitment in Kandahar.

To my ear, he was even more interesting on a broader question of how a smallish country like Canada can be influential in a world capital like Washington. He said the best way to be taken seriously is to reliably offer top-level American officials “a better understanding” of where the U.S. fits on a given issue “from the Canadian standpoint.”

Yes, that’s right—offer understanding. Context. Intelligent analysis. Independent perspective. Not horse-trading. Not you-scratch-my-back-I’ll-scratch-yours deals. And this from a guy who is the farthest thing from a Pearsonian romantic when it comes to foreign policy. Wilson is a stolid, practical, Conservative fellow, not a soft-power dreamer.

Yet he argues that to matter in a world capital, Canada’s representatives need to think and speak on “a global basis.” Only after we’ve established our capacity to offer constructive insights on the big picture can we expect progress on narrower bilateral issues to come “more quickly.”

In other words, we don’t have to choose between being hard-headedly focused on national interests and big-heartedly concerned about international issues. In fact, we can’t separate the two categories. It’s only when we understand the world, and can communicate useful ideas about what’s happening out there, that any pleas for attention to our own preoccupations will be recognized.

Even in the generous swath of question-and-answer we offer in the feature Maclean’s interview each week, there’s not space for everything. From the Wilson interview, we edited out an observation he made about the changing perspective of Americans on their own place in the world. Here’s what he had to say:

“ I’ve observed both with the Bush administration, and now more prominently in the Obama administration, a recognition that the United States is not the superpower that can just decide what should be done. They have to work more closely and take collaborative decisions with allies, with other countries that are affected, and recognize that this is a more collaborative, multi-polar world.

“There still is the United States as the major superpower – no one is close at this point with them – but the other countries, we hear about the BRIC countries – Brazil, Russia, India and China – they’re all coming up.  And there are other countries in the world that are improving their international standing as well. So it is a different world that we’re coming into, and we have to recognize and plan, strategize, as to where does Canada fit into all of this, and that’s I think a challenge for the new ambassador but it’s primarily a challenge for the government.”

At at moment when Americans have come to better appreciate their need for capable, sophisticated allies, Canada should never have to feel sidelined. But to play, we need to bring to every world forum an informed, coherent understanding of world affairs. Whether we currently display anything approaching that sort of confidence—on top-of-mind issues like climate change and Afghanistan’s future—is a troubling question.