Politics Insider for May 31: The VP and Trudeau each got something, the Liberals' endless abortion talk and J.D. Irving gets a news tip 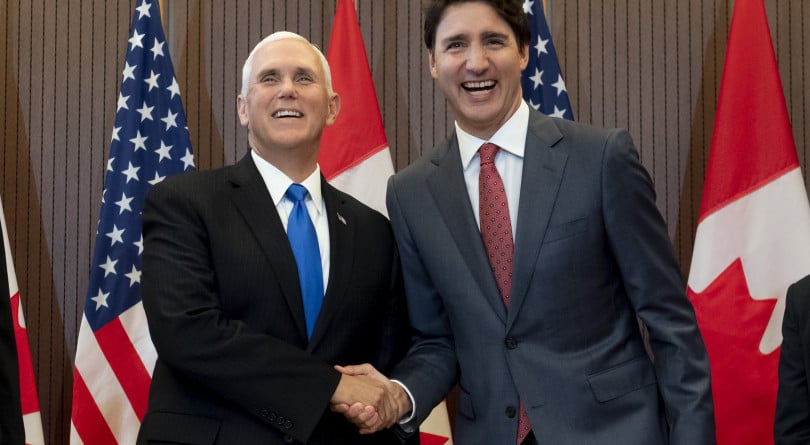 Prime Minister Justin Trudeau and U.S. Vice-President Mike Pence participate in a welcoming ceremony in West Block on Parliament Hill during a visit in Ottawa on Thursday, May 30, 2019. (Justin Tang/CP)

Were his fingers crossed? Kudos to Vice President Mike Pence for keeping a straight face as he evoked his  boss’s deep affection for Canada on Thursday: “I’m honoured to be here today on behalf of a friend of yours and a great friend of the Canadian people, President Donald Trump.”

Deal with it: On the trade front Pence credited Trudeau for “driving a hard bargain.” Having the U.S. VP praise the Trudeau government’s negotiating skills should help the Liberals, who face constant accusations from the opposition that they caved to Trump. (CBC News)

(On the other hand, isn’t that the kind of thing a victor might say so the other side can tell itself it didn’t loose.)

Having had his back scratched by Pence, it was Trudeau’s turn. He urged the Democrat-held Congress to support Trump and ratify the deal because it contains a lot of things Democrats should like: “They are significant things that we look to the U.S. Democrats to understand are significant improvements and are issues that, like Canadian Liberals, they care deeply about. So we are confident that the work being done on ratification is possible because we made sure that, from multiple angles, this was a better deal for Americans, for Canadians and for Mexicans.” (CBC News)

We may see how strongly Trudeau’s words resonate with Democrats sooner rather than later. The Trump administration has sent a letter to Congressional leaders that included a draft of an administrative action that would send the deal to Congress to be ratified within 30 days. (CNBC)

Aaaaaaand scratch that: Last night Trump effectively ensured USMCA won’t be ratified by Mexico any time soon by promising to slap a five per cent tariff on all Mexican imports starting on June 10 to force that country to crack down on migrants crossing the U.S. border. (CTV News)

Common ground: Pence also did Trudeau another solid, confirming publicly that the U.S. will link its trade talks with Beijing to the release of  two Canadians detained by China in anger over Canada’s arrest of a Huawei executive on a U.S. warrant. As John Geddes writes at Maclean’s, securing their release has become the most pressing diplomatic preoccupation of the Liberal government, yet things haven’t been going Canada’s way:

Enter Mike Pence. Asked about the detained Canadians by reporters today, Pence said he and Trudeau spoke “extensively” on the file. Then he volunteered a commitment about the Group of 20 leaders’ summit coming up in late June in Osaka, Japan: “Let me say that President Trump will be travelling, along with the Prime Minister, to the G20 in the weeks ahead. We anticipate he will be meeting with President Xi there. We are in the midst of significant discussions over our trading relationship, but I can assure you in that context and going forward, we’re going to continue to urge China to release the Canadian citizens, even while we deal with the larger economic and structural issues between the United States and China.” (Maclean’s)

Miles apart: But the A-word hung over much of the day. Trudeau had said he would raise concerns with Pence about the U.S. backsliding on abortion rights, and he did. But while Pence hailed the close relations between the two countries for allowing a “candid” discussion, Pence didn’t shy away from his views: “But let me be clear, I’m very proud to be part of a pro-life administration and our administration has taken steps to stand for the sanctity of life at home and abroad.”

Trudeau’s endless talk about abortion should be a clear indicator to everyone that the Liberals are worried about the upcoming election, writes Andrew MacDougall:

The Liberal play on abortion is 100 per cent domestic. Slapping at the vice-president should also please the clap-happy backbench. But if you had told the Liberals at Christmas that cheering for abortion is how they’d be preparing for the upcoming federal election they would probably have guessed that something had gone wrong.

Let me get that for you: How do you turn $24,000 into nearly $100,000 in just four months? Get a sole-source contract to hold doors open for senators. In February Ottawa security firm Arlington Group Inc. was granted a contract to provide “ushers” to the Senate of Canada Building, the Upper Chamber’s temporary digs, because of a shortage of automatic door openers. After the original contract ballooned in size to $95,000 administrators suspended the use of security guard-ushers while the contact is reviewed. (CBC News)

Scoop: The federal government is making a habit of tipping off J.D. Irving whenever pesky reporters come poking their noses around. When the Globe and Mail reached out to Economic Development to ask if the company had counted any of its investment in an Alberta french fry plant against its re-investment obligation under a naval shipbuilding contract, bureaucrats almost immediately got on the horn to J.D. Irving, which dispatched its lawyers and threatened legal action. Two months ago the same thing happened when a Postmedia reporter asked two other departments about  the company—and that was the third time Ottawa tipped off the company about that reporters inquiries. (Globe and Mail)