Politics Insider for Dec. 10: Not your typical federalism clash, CUSMA ratification could finally be here and the middle class tax cut moves forward 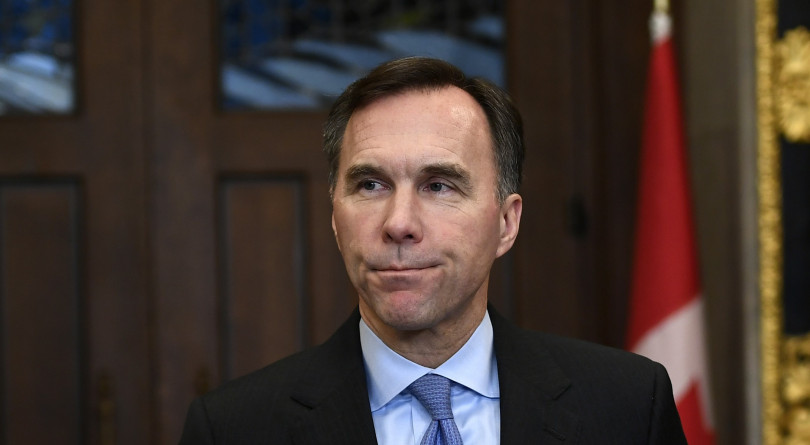 Minister of Finance Bill Morneau makes an announcement on lowering taxes for the middle class in the Foyer of the House of Commons on Parliament Hill in Ottawa, on Monday, Dec. 9, 2019. (Justin Tang/CP)

The stubborn state of federalism in Canada: When federal and provincial governments clash, there’s usually at least a desire to make progress, writes Paul Wells in Maclean’s Year Ahead 2020 print edition. Not this time:

Premiers and prime ministers used to meet all the time for sometimes-acrimonious meetings that would, nonetheless, lead to real agreement on big files such as health care funding and, a couple of times during the 1980s, big constitutional change. And bilateral meetings between prime ministers and premiers used to allow progress even when the principals were otherwise feuding: think of Jean Chrétien cutting ribbons on big infrastructure projects with Ontario Conservative premier Mike Harris, or with Parti Québécois premiers of Quebec on projects that improved both sides’ electoral prospects.

Trudeau has met since the election with a few premiers, including Moe and Manitoba’s Brian Pallister. He’s said he hopes to meet the premiers, as a group, in the new year. But executive federalism—joint decision-making by federal and provincial governments, as opposed to routine management of files by lower-level government officials—has almost never had a lower profile in Canada. Under two consecutive prime ministers, Stephen Harper and Justin Trudeau, the federal and provincial governments have preferred to make big decisions in isolation. Or to reduce their interaction to a succession of insults and catcalls. Read more ››

Economically speaking: Friday’s employment report, which saw the economy shed 71,000 jobs in November from the month before — the worst monthly decline since the Great Recession — has breathed fresh life into Conservative attacks on the Trudeau government’s handling of the economy. After Conservative finance critic Pierre Poilievre pilloried Finance Minister Bill Morneau on Sunday for the “gathering storm clouds” over the economy, and called on Morneau “to present an urgent fall economic update to salvage Canada’s teetering economy,” the party’s deputy leader Leona Alleslev resumed the attack in question period on Monday: “Businesses are leaving Canada and foreign direct investment has dropped by 56 per cent under this government. Government spending is out of control, Canada’s debt is ballooning and we are on the edge of a recession.”

So is Canada headed for a recession? You won’t be surprised to learn that Morneau doesn’t think so. “My job … is to worry,” he said on CBC’s Power & Politics. “I have to worry about numbers that came out last week. I also have to look at that in contrast to numbers that came out the week before. We will always look to ensure that we have the ability to respond to challenges, but no … we’re dealing with an economy that’s strong.” For evidence he pointed to recent upturn in foreign investment, and “very good employment numbers in the United States.” Well, you don’t have to tell this guy.

Give us a (tax) break: Following through on Justin Trudeau’s throne speech pledge to make his government’s middle class tax cut the first order of parliamentary business, Morneau tabled a ways and means motion to increase the basic personal income tax exemption by $2,000, to $15,000. The motion will be put to a vote this week and because it involves government finances it will be a confidence vote. No word yet from the Conservatives on whether they’ll support it or not, but as with the throne speech vote the Bloc Quebecois said they’ll back it, so its fate is secure.

By the way, Morneau also finally committed to a date for releasing the fall economic update. Sort of. “Our plan is to have a fiscal update before Christmas so we can update Canadians on the state of the economy,” he said.

Stop us if you’ve heard this but…: One last bit of economic news before moving on. Democrats appear ready to support changes to the CUSMA trade deal that could finally lead it to be ratified by Congress. Chrystia Freeland, in her role as CUSMA clean-up minister, was on her way to Mexico last night to meet with U.S. Trade Representative Robert Lighthizer and Mexican trade officials.

The future of ‘Saskberta’: Also from the year ahead print edition Jason Markusoff looks at how the two Prairie provinces will make common cause in 2020 in an alliance born of anger and economic pain:

There are few better perches than Lloydminster from which to hear the sirens and sighs of oil country. Fiftieth Avenue cleaves the 31,000-person city into coarse halves—one in Alberta, the other in Saskatchewan. But it’s an interprovincial compromise zone where (as in Alberta) stores don’t charge provincial sales tax, clocks turn to daylight time (unlike in Saskatchewan) and young families tend to prefer settling on the city’s east side to save on auto insurance (through Saskatchewan’s public insurer).

Lloydminster is represented by two conservative premiers who sound the drumbeats of pro-energy, anti-Trudeau frustration; whose provinces now have zero Liberal seats, provincially or federally. Their populaces now are more likely than Quebecers to believe that they’d be better off if they separated (33 per cent in Alberta and 27 in Saskatchewan, compared to 26 per cent in Quebec, according to an October poll by Ipsos). Read more ››

Canada must stop normalizing inequality for Indigenous people: The federal government, which has an insatiable appetite to be thanked for inadequate measures, should expect no gratitude for discrimination, writes Cindy Blackstock:

Evidence linking federal shortfalls in basic public services with the deaths and unnecessary family separations of First Nations children dates back 112 years. Despite this, Canada has repeatedly chosen to normalize inequality rather than fix the problem. Its warped expectation of gratitude is embedded in phrases we hear all too often: “We have done more than any other government”; “We are taking good first steps”; “Be patient—it’s complex”; “Change can’t happen overnight”; and the latest one, “We are talking to partners.” Read more ››

The woman who reimagined the modern city: The latest episode of Maclean’s Power of One podcast tells the story of Gabriella Gómez-Mont, who despite no formal training as a planner, has unleashed the talents and energy of ordinary citizens to tackle the challenges of today’s mass metropolis:

The problems of the modern metropolis are increasingly those of humanity: more than half of the world’s people live in cities; by 2050, that share is expected to reach 68 per cent. Yet many urban issues—pollution, crime, homelessness, traffic fatalities—stubbornly defy the efforts of the political leaders, planners, engineers and assorted experts we employ to fix them.

Imagine, then, giving the job to an artist. That, in effect, is what Mexico City did six years ago when it made Gabriella Gómez-Mont creative director of its Laboratorio para la Ciudad, or the Laboratory for the City. Listen to the episode here ››.

Speak up: Help us better understand what you’d like from the Maclean’s Politics Insider newsletter. This short survey will only take a few minutes to complete. We really appreciate the feedback.