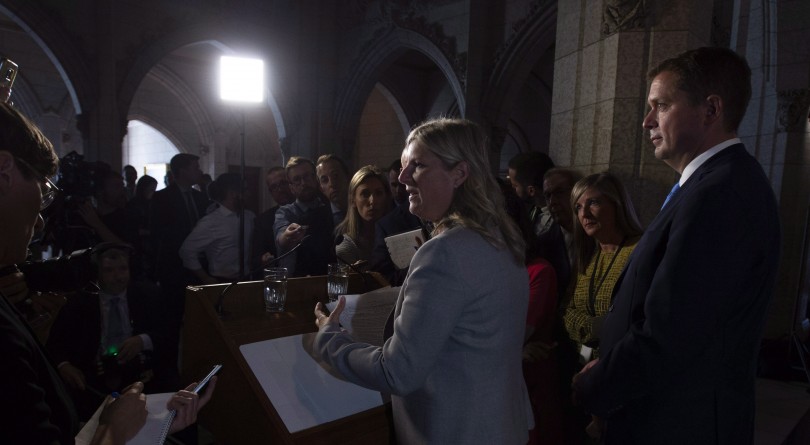 Leader of the Opposition Andrew Scheer (right) looks on as Leona Alleslev, who crossed the floor from the Liberal party to Conservative party speaks with the media about her decision on Parliament Hill in Ottawa, Monday September 17, 2018. THE CANADIAN PRESS/Adrian Wyld

On Sept. 17, Leona Alleslev—the Liberal member of Parliament elected in the riding of Aurora—Oak Ridges—Richmond Hill in 2015, and the former parliamentary secretary to the minister of public services and procurement—jolted affairs on Parliament’s first day back after the summer break by crossing the floor from the governing Liberals to the Conservative Party’s benches. Below is her full statement, of which her speech in the House of Commons was a part, on why she made the decision.

READ MORE: Dear Canadian voters: It’s time to get in the game

When I became an officer in the Royal Canadian Air Force, I swore an oath to give my life for Queen and Country—to serve and defend Canada, and the values for which it stands.

A country, its sovereignty, and values are fragile. Vigilance in defending our nation’s freedom, and service to country, is who I am at my core.

When I left the military, I hung up my uniform, but I never “unswore” my oath. And now I serve Canadians by representing the people of Aurora—Oak Ridges—Richmond Hill as their Member of Parliament.

I am deeply concerned for the future of our country. After 3 years of hope and hard work, I find myself asking:

“Am I doing everything I can to serve my country and work for real change for Canadians?”

Canadians expect—and deserve—nothing less. The citizens of my riding, and all Canadians, need a government that delivers foundational change for the things that matter.

The world has changed dramatically in the last three years. We find ourselves in a time of unprecedented global instability. We are seeing fundamental shifts in the global economy, while trade relationships, international agreements, and defence structures are under threat. Canada faces a perfect storm of serious challenges at home and abroad.

Here at home, we see large amounts of capital investment leaving Canada while tax structures, federal infrastructure problems and politics prevent us from getting goods to market, deter companies from expanding and undermine our competitiveness. For the first time in many years, Canadians don’t believe that tomorrow will be better than today and that their children’s future will be than theirs.

This is not a strong economy.

Beyond our borders, our position remains vastly diminished. Our foreign policy is disconnected from our trade relationships and our ability to deliver on our defence commitments is undermined by politics.

And on the world stage Canada has yet to rise to the occasion. The world has changed, and Canada must change with it. We don’t have the luxury of time.

We must recognize that foreign policy, trade, defence, and our economy all depend on each other and can’t be viewed separately.

As a former Air Force Officer, a global business consultant at IBM, an aircraft manufacturing manager at Bombardier, and a small business owner. I understand the role and impact of government actions on Canada’s economy.

To have a strong economy and a strong country we need strong Federal leadership to rebuild our nation’s foundations; tax reform, employment reform, federal infrastructure, a comprehensive foreign policy, and a modernized military to reassure our allies and defend Canada’s interests at home and abroad.

Our parliamentary system consists of political parties. However, political parties are only made up of the people who are in them at the time and must also be judged by what the country needs at the time. Today, we find ourselves at a tipping point in our country’s history.

It’s my duty to stand and be counted. Our country is at risk. My attempts to raise my concerns with this government were met with silence.

After careful and deliberate consideration, I must withdraw from the government benches to take my seat among the ranks of my Conservative colleagues and join Her Majesty’s Loyal Opposition whose role it is to challenge and hold the government to account.

The Leader of Her Majesty’s opposition is committed to delivering foundational changes to strengthen Canada’s economy, and a comprehensive foreign and defence policy that ensures our global competitiveness and security.

I look forward to working with my Conservative colleagues who are unafraid to do the real work to tackle the priorities of our time.

To my Liberal colleagues, I want to thank them for the opportunity to work with them and for their friendship. But my oath is to country, not party, and my sacred obligation is to serve my

constituents. I look forward to working with my Liberal colleagues, across the aisle, to shape the future of the country for all Canadians.

To my constituents, I want to re-assure them that I am the same person today that they elected on October 19, 2015. I believe in a strong, ethical Federal Government that unites us as Canadians. To achieve what they demand of me, I must change political parties.

I must do what is right, not what is easy.

I ask the citizens of Aurora Oak Ridges Richmond Hill to continue to hold me to account as I serve them and work as part of a new team focussed on the fundamental challenges facing our riding and our nation.

And to all Canadians across this country – I say:

Challenge your Member of Parliament.

Demand that they work for you to strengthen our country’s foundations, foreign policy and global security.

Do not accept the status quo.

This is a time in our nation’s history where we must act with urgency. We must all, have the courage to do what is right not what is easy.

Our country is at stake.