Mr. Scheer goes to India, for some reason

Murad Hemmadi: The opposition leader is following the Prime Minister to South Asia, but it doesn’t seem like there’s much for him to do there. Get ready for more photo ops, only this time in a suit 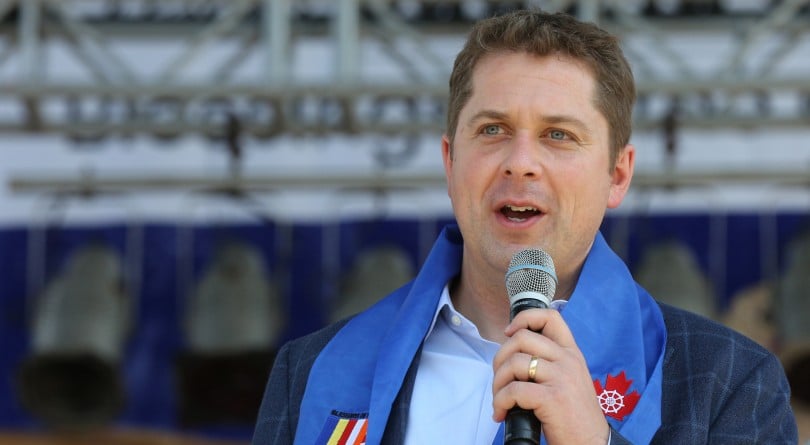 Justin Trudeau went and did his very particular thing in India in the winter, and so naturally it’s Andrew Scheer’s turn in the fall. The Official Opposition and Conservative Party leader has a nine-day trip to the South Asian nation on his calendar for October, for some reason.

His “mission,” which he has chosen to accept, is to “repair and strengthen Canada-India relations.” Repair, because Trudeau’s—the words “prime minister” tend not to make it into these kinds of statements, lest you remember who technically does foreign policy around here—“disastrous trip” “damaged this key relationship.” So “we”—Andrew Scheer, for some reason—“must now work to repair it.”

Scheer will meet with “senior Indian government officials, business leaders and civil society and faith leaders” on the nine, nine, day visit, and presumably not all crammed in at the end, like Justin did on his trip. There will be no “Taj Mahal photo ops,” Tory officials told the Canadian Press. Nor, one assumes, the kurta-pyjama and salwar-kameez outfit choices that were the subject of press fun-making and jokes in desi WhatsApp groups.

But really, why is Andrew Scheer going to India? I’d venture it has more to do with domestic politics than the “symbolic and cultural bonds borne from decades of migration.”

Take that “damaged” relationship in need of “repair.” Scheer’s office did not provide examples of the toll taken, in response to questions from Maclean’s. No matter, the Conservatives helpfully made the case in the House of Commons in the spring. You may remember when Jaspal Atwal, a former Khalistan adherent who tried to assassinate an Indian state cabinet minister visiting British Columbia back in the day, showed up at a Bollywood event on the official trip itinerary, and the national security advisor implying it had to do with “rogue factions” in the Indian government. Well, India then raised its tariff on chickpeas, which is a pulse, which are among Canada’s biggest exports to India. You do the math. The Conservatives certainly did in question period.

Only, the math adds up to a big fat zero. India uses tariffs to control domestic supply and placate farmers, not to punish trading partners. And chana is a tiny portion of Canada’s pulse exports to India. Our particular varietal wasn’t even the one levied! Australia actually bore the brunt, making you wonder what Malcolm Turnbull did to upset Indian Prime Minister Narendra Modi.

And—well, that’s it really. It went mostly unnoticed, but Trudeau met with the heads of most every major Indian conglomerate in Mumbai in the middle of his trip, in a suit at that. Their hands have been shaken, and their quarter-billion dollars or so in investments secured. It wasn’t much, but the whole trading relationship only amounts to $8 billion or so annually.

The major problem with Trudeau’s trip wasn’t that he fluffed the execution, it’s the idea that there was a whole lot to be gained for the bilateral relationship from going in the first place.

RELATED: The troubles facing Justin Trudeau on his first state visit to India

Last spring, when Maxime Bernier was still a candidate for the leadership of the Conservative Party instead of Canadian politics’ attention seeking-est Twitter troll, he laid out a campaign strategy for the 2019 election in a Maclean’s profile. It consisted of following Justin Trudeau around the country, promising not to do everything the Liberal leader promised he would do. (The punchline was that he’d cut taxes instead). Andrew Scheer seems to be trying something similar, only internationally, and for a domestic audience. He’s already been to the U.K. to announce that a Conservative government would do a post-Brexit trade deal, something the actual government had already committed to. Where’s the harm in a 13-hour flight to India to cement such impressive foreign policy credentials?

As for what Scheer will do there, Stephen Harper could always make an introduction to his mate Modi, who he’s been to see each of the last two Januarys in New Delhi. And some diaspora businessman with a Conservative Party membership and a hand in both economies could no doubt gather together a few CEOs for grip-and-grins. Neither type of meeting is likely to yield much.

No, the best explanation on offer for this little sojourn east is that the Tories looked back over the numbers for the last year or so and realized that Trudeau seemed most troubled in the immediate aftermath of his own India trip. The foreign press turned on their theretofore darling, and both Prime Minister and his party slipped in the polls. Send Scheer to tour the country shaking some mid-profile hands and inviting no convicted separatists to dinner, and you get a set of pictures of him in a jacket and tie to use in diptychs with Trudeau in those outfits in 2019 attack ads. (I hope you’ve got some linen in that wardrobe, Mr. Scheer—it’s hot in India in October).

You don’t have to believe that politics should stop at the water’s edge or the border checkpoint to find this to be a cynical ploy, no less so than flying the prime minister and his family halfway across the world for some photo ops to use in suburban diaspora communities come election time.

RELATED: Justin Trudeau may have lost the foreign press (and not just Fox News)

Scheer’s trip announcement makes mention of a “united India,” which it’s hard not to read as a nod to the spike in coverage of the Khalistan movement following Trudeau’s trip. Interestingly, senior Liberals say that while the family Trudeau’s be-garbed photo-ops seems to have hurt them with voters, l’affaire Atwal did not. So if that’s what Scheer’s statement is referencing, it’s for domestic nought.

Worse than that, actually—Indian governments, and this one in particular, use security and separatism as tools of domestic politics. Violent agitation for Khalistan is a going concern nowhere but in its telling. Now is certainly not the time to be playing along with the Indian government’s little security game—press freedom and the treatment of religious minorities have not exactly improved under Modi’s Hindu nationalist party.

But let’s look forward. “A Conservative government will dramatically expand” relations and “advance” a trio of shared stuffs including “prosperity,” Scheer’s statement says. If that means trying to close the bilateral trade and investment deals that have been works in progress for almost a decade—as with everything else, the opposition leader’s office didn’t specify by deadline—well, this won’t be the first time a Conservative government has made that commitment.

A throne speech in 2011 under the gaze of a certain Stephen Harper set a target of two years later to conclude negotiations on an economic partnership agreement; then-trade minister Ed Fast, whom Scheer will know from around his shadow cabinet table, and his Indian opposite number exchanged congratulations on the conclusion of an investment protection pact in New York that same year. You might notice we’re still talking about both those treaties as unrealized opportunities.

That’s not all, or perhaps even at all, the Harper government’s fault. India and Canada do things differently at the negotiating table, and the two countries’ notions of a fair deal have yet to align. One person in a position to know analogized trade negotiations to the army: “Long periods of boredom and short periods of terror.” The Indian bureaucracy specializes in torment by tedium.

RELATED: Canada and India can’t seem to make a trade deal. Here’s why.

Scheer has noticed that India is “one of [the world’s] fast-growing economies,” as he put it in his statement. It turns out that others have too—the queue to do a trade deal starts behind the Europeans. Maybe the opposition leader has a secret plan for tenfolding the Canadian economy, which might accelerate the timeline for a trade treaty signing. But if he doesn’t, swapping out Justin Trudeau for Andrew Scheer in the reception line won’t make a difference.

Traipsing around India in a suit for nine days in October to own the Libs—that’s a new one, Mr. Scheer.