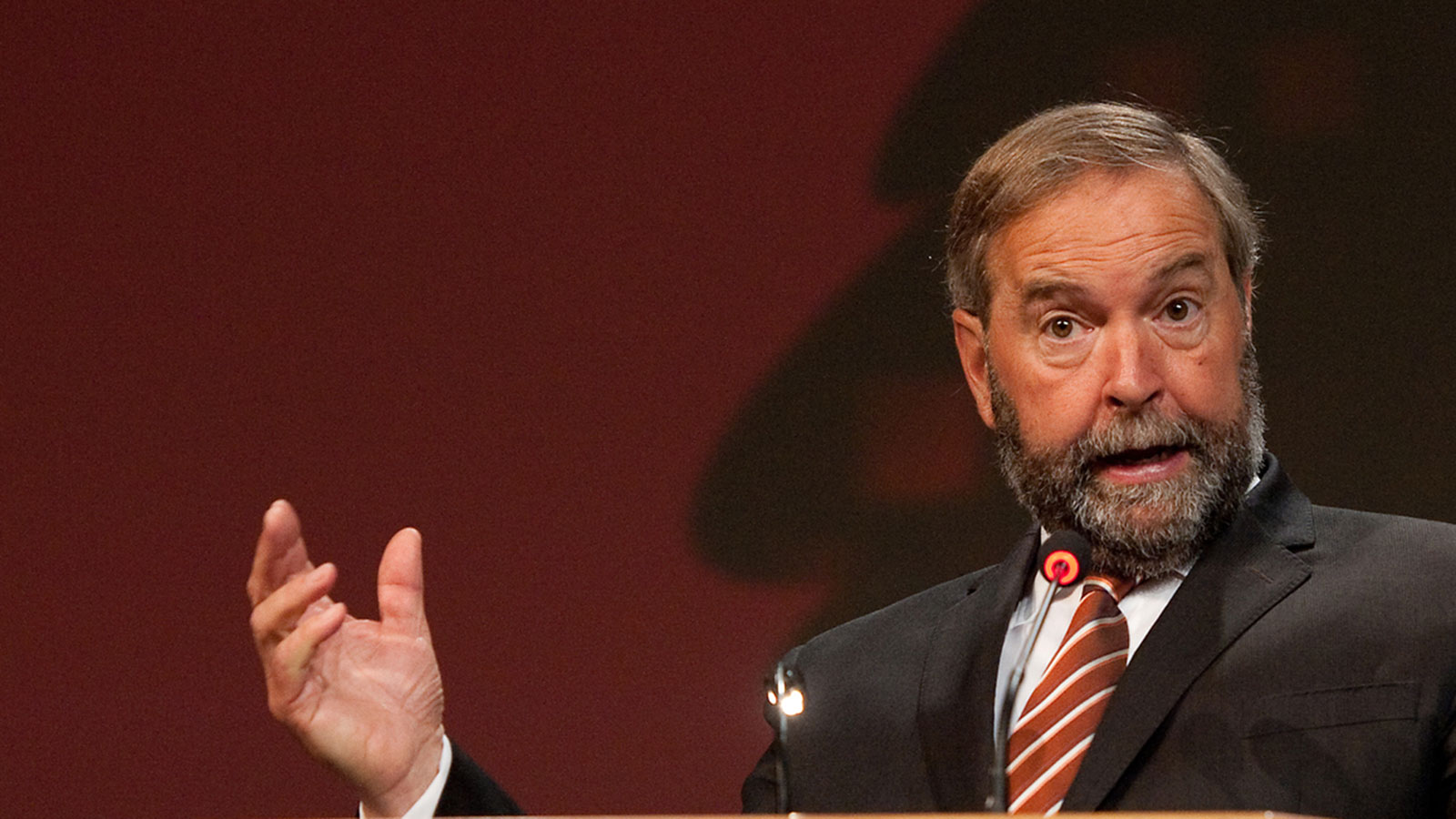 There’s an inconvenient complicating detail in the Great Stephen Harper-Justin Trudeau Showdown of 2015. His name is Tom Mulcair, his New Democratic Party still holds 98 seats in the House of Commons and, the other day, he dropped a big hint about how the 2015 election will go. Almost nobody caught the hint. Let’s take another look.

Mulcair has not had an easy time of things. He is still the leader of Her Majesty’s official Opposition. But, outside the Commons chamber, where he is a formidable slugger, Mulcair has a hard time getting traction. The NDP has suffered a steady trickle of defections—one MP went to the Bloc Québécois, one to the Liberals, one to the Greens, one to sit as an Independent. Olivia Chow quit to run for the Toronto mayoralty; the NDP lost her seat in the resulting by-election. Liberal MP Denis Coderre quit to run for mayor of Montreal; the NDP could not pick up Coderre’s riding, even though it’s right next door to Mulcair’s Outremont fief. The party is third in every national poll. Mulcair doesn’t shine in reflected light from the memory of Jack Layton; he’s eclipsed.

He keeps showing up. On Aug. 20, he spoke to the general council of the Canadian Medical Association. He had a few topics on his mind.

He talked about the Harper government’s cuts to veterans’ service centres. “Earlier this year, I wrote to the Prime Minister, asking him to make military suicides and mental health a personal priority. He never bothered to respond.” He mentioned marijuana precisely once, so, of course, most of the day’s headlines were about marijuana.

He also announced a plan to send billions of dollars a year out of Ottawa to provincial governments. Billions more than Harper, even. It was the kind of big directional policy announcement we sometimes complain we’re not getting from our party leaders. But it contained words of several syllables, and he also compared pot to oregano, so, well . . .

Here’s what he said: “After promising to protect all future increases to provincial transfers, Conservatives announced plans to cut $36 billion, starting in 2016,” Mulcair told the CMA. “This spring, Conservatives will announce, with great fanfare, that there is now a budget surplus. I’m here today to tell you that an NDP government would use any such surplus to, first and foremost, cancel those proposed cuts to health care.”

This needs parsing, but first, let’s let Mulcair finish: “Mr. Harper, it’s time to keep your word to protect Canadian health care. After giving Canada’s richest corporations $50 billion in tax breaks, don’t you dare take $36 billion out of health care to pay for them!” He said that part in English, then repeated it in French, which has become the way a Canadian politician delivers a line in italics.

Well. Let’s begin with the $36 billion. In December 2011, Jim Flaherty, then the federal finance minister, met his provincial colleagues to announce his plans for health transfers after a 10-year deal set by Paul Martin ran out in 2013-14. The 2004 Martin deal declared that cash transfers to the provinces for health care would increase by six per cent a year for 10 years. Harper simply kept implementing the Martin scheme after he became Prime Minister.

What Flaherty announced, without consulting with the provinces first, was that health transfers would keep growing at six per cent through 2016-17. Then, they would grow more slowly—how slowly would depend on the economy. The faster GDP grows, the faster transfers would grow. But, if the economy tanked, the rate of growth could fall as low as three per cent per year. Flaherty said this scheme would stay in place through 2023-24.

Add up all the shortfalls between three per cent and six per cent over seven years and you get a cumulative sum of $36 billion. Despite what Mulcair said, this isn’t a “cut,” it’s a deceleration in increases. And $36 billion is the gap’s maximum amount. If the economy shows any health, the gap will be smaller.

We could have fun complaining that Mulcair calls something a “cut” when it extends what is already the longest period of growth in federal transfer payments in Mulcair’s lifetime. But it’s more fun to take him at his word. He promises to spend as much as $6 billion a year in new tax money on health care. Mulcair couldn’t buy much influence over health policy with that money; he would simply send larger cheques to provincial governments. If he has other plans for the federal government, he’d have to pay for them after he’d sent that up-to $6-billion cheque to the provinces.

How would he afford it? He’s sworn not to increase anyone’s personal income taxes. That leaves the “$50 billion” in corporate tax cuts he complained about. In short, Mulcair is calling for a very substantial further decentralization in Canadian federalism, funded, perhaps, out of a major reversal in corporate tax cuts.

In important ways, this would actually continue the hard work Harper has done, restricting any federal government’s ability to run new programs out of Ottawa. Of course, it would: Mulcair, like Harper, grew up in a province whose elites mistrust the federal government.

The 2015 election will, or should, turn on big questions about Ottawa’s role in an era of economic uncertainty and aging populations. Tom Mulcair has begun to propose his answers. He is, in other words, doing his job.