Mulcair's secret meetings with the Tories

Talks with the PMO in 2007 about a job broke down over money, sources say. Mulcair says it was different sticking point. 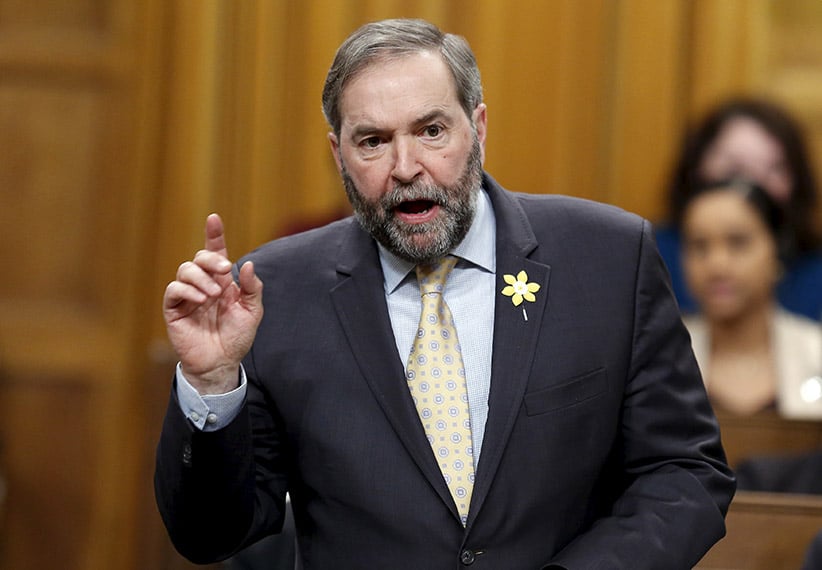 NDP Leader Thomas Mulcair was in discussions in 2007 to join the Conservative party as a senior adviser to Prime Minister Stephen Harper, discussions that several sources, including former senior Harper staffers, say was the first step in securing Mulcair to run as a Conservative candidate in 2008.

The negotiations between the Conservative government and the man who is today leader of the left-leaning official Opposition allegedly broke down over money: Mulcair wanted nearly double what Harper’s office offered, two sources tell Maclean’s.

Contacted Monday for comment, Mulcair says conversations about an advisory role with the government did occur, but talks broke down, not over money, but over the Conservatives’ environmental policies. Mulcair at the time had recently resigned as environment minister in Jean Charest’s Quebec Liberal government.

Mulcair says he was first approached by Quebec Conservative MP Lawrence Cannon in 2006 to join the party, and that discussions focused on joining the National Round Table on the Environment and the Economy, a government advisory agency. Mulcair says he followed up with Cannon’s chief of staff, Paul Therrien, and, finally, with Harper’s office.

“My last exchange was with then chief of staff Ian Brodie, who was also looking at an advisory position. The only subject was Kyoto and climate change. He made it clear that my support for Kyoto would have to change. That, for me, was out of the question. This was our last conversation. Our talks broke off on climate change,” Mulcair tells Maclean’s. (Cannon, currently Canada’s ambassador to France, didn’t respond to a request for comment. Update: He did respond on Tuesday.)

According to sources, Mulcair contacted senior Prime Minister’s Office (PMO) staff to request a meeting with Harper in early 2007. Brodie briefed the Prime Minister and had several of the initial conversations with Mulcair. Brodie passed the file to Harper’s press secretary, Dimitri Soudas, who was tasked with negotiating Mulcair’s title and salary.

“All had been agreed upon. He would be a senior adviser to the Prime Minister on the Environment, and would run for us in the next election. Everything was pretty much agreed to,” Soudas said Monday. The Prime Minister was briefed on these negotiations, Soudas adds.

“In 2007, Mr. Mulcair approached the government and had conversations about employment as an adviser to the PMO,” a source with knowledge of the discussions tells Maclean’s. “He was seeking more money than the government was willing to offer.”

The sticking point, Soudas says, was salary. Soudas says he was authorized to go up to $180,000 a year without getting prior authorization from Harper. “He told me he wanted $300,000 a year and that was his bottom line and, basically, I got back to him, saying I couldn’t go higher that $180,000, and I never heard back from him ever again. Two or three months later, he made the jump to the NDP,” Soudas, who has since left the Conservatives, tells Maclean’s.

Mulcair denies negotiating with Soudas. “I absolutely never spoke with Mr. Soudas at the time,” he says. “I had no intention of running for the Conservatives.

“At the time, I was also weighing a substantial offer from a top law firm to join their environment section that was well beyond anything available in public service or with a party. More to the point, though, money was never the issue, because I was still interested in serving my fellow citizens.”

Mulcair joined the NDP in April 2007. Five months later, he won a by-election in the Montreal riding of Outremont. By winning his seat in the 2008 election, he became the first NDP MP to be elected in Quebec in a general election. He was re-elected in 2011.

His federal political success was due in part to Mulcair’s green-friendly narrative. A longtime provincial politician in his native Quebec, he served as environment minister in Jean Charest’s government from 2003 to 2006. “He resigned from cabinet on a matter of principle after he refused to sign an order that would have transferred lands in Mont Orford Provincial Park to private condominium developers,” reads his NDP biography, in part.

The Conservative government’s environmental stance was well-known in 2007. As leader of a minority government—the Conservatives first assumed office in February 2006—Harper had already distanced his government from the country’s commitments to the Kyoto Protocol, an international treaty aiming to reduce global greenhouse-gas emissions.

Recruiting Mulcair to the CPC would have been a coup for the party, which had few roots in Quebec and even fewer in its biggest city. “Montreal was a bit of a desert for us,” Soudas says. Mulcair was an ideal candidate: a fluently bilingual Montrealer, he was also known for his deftness with a sound bite and general ferocity against political foes.

This last bit was apparently enough to turn off Quebec Conservatives at the time. “He had this aura around him. Everyone was wary about him because of his attitude and temperament,” a former Conservative organizer in Quebec told Maclean’s.

Maclean’s first heard of Mulcair’s negotiations with the PMO several months ago, but was only able to confirm the details recently. Neither the government, the Conservative party nor Soudas approached Maclean’s about Mulcair’s negotiations. Soudas worked for Harper and the Conservatives in a number of functions. Most recently, he served as executive director of the Conservative Party of Canada, a role he was forced to give up after he allegedly worked on the campaign of Eve Adams, with whom he is romantically involved. Today, apart from being a “proud volunteer” for Adams’s Liberal nomination campaign in the federal riding of Eglinton-Lawrence, Soudas is COO of the International Economic Forum of the Americas. He also runs the Stampede Group, a consulting agency.

In a sense, Mulcair has been exactly the kind of success story for the NDP as he might have been for the Conservatives. The party has largely maintained its support in Quebec, despite a crop of largely inexperienced rookie MPs elected in 2011, and the death of Jack Layton that same year. Recent polls suggest a surging NDP across the country.

As leader of the Opposition, Mulcair has been forthright and prolific in his criticism of the Harper government, particularly on the environmental file. “Our plan is one that ensures sustainable prosperity. It will create jobs, grow Canada’s economy and protect the environment. We will reverse the damage that Stephen Harper has done,” the NDP leader said recently.

In response to questions about his 2007 discussions with the PMO, Mulcair says: “I made my choice to join Jack Layton’s NDP, the party closest to my values. I made that choice at a time when the NDP had never won a seat in a federal general election in Quebec. I’m glad I did. I imagine some of my adversaries wish I hadn’t.”