Paul Wells: Jason Kenney's idea here is to storm Saskatoon with a firm set of plans. Against the distracted mush most premiers usually bring to their summer meetings, it'll be harder to resist. 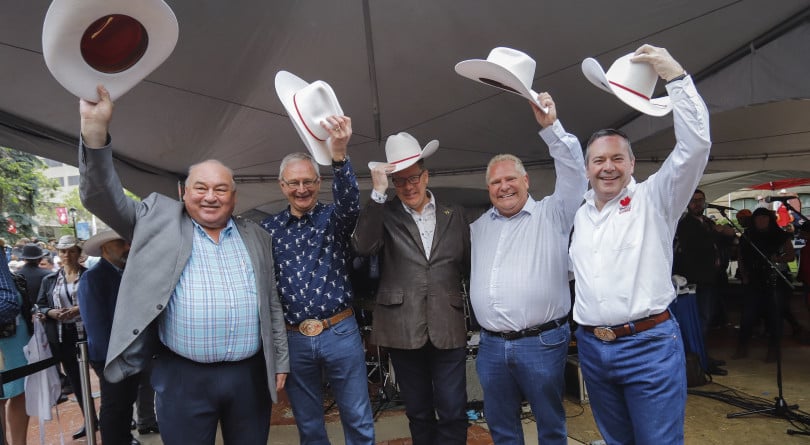 Political nature abhors a vacuum. Here’s the website for the Council of the Federation, which nearly as soon as it was created in 2003 decided that “Council of the Federation” was a dorky name and that “Canada’s premiers” was, if nothing else, more search-friendly. (The original website lives on in ghost form and features such vaguely wistful archived press material as “Premiers look forward to next meeting with Paul Martin.”)

The premiers—the council?—meet this week in Saskatoon. But they have already been upstaged by a preliminary meeting Jason Kenney hosted Sunday and Monday in Calgary, where the Stampede is underway. This pre-meeting meeting involved a Kenney-friendly subset of the full premiers’ roster: Doug Ford from Ontario, Scott Moe from Saskatchewan, Blaine Higgs from New Brunswick and Bob McLeod from the Northwest Territories.

READ MORE: Is unleashing Jason Kenney on Ontario a good idea for the Tories?

Kenney got elected so recently that I’m actually still getting emails returned from his office. That never lasts. The Alberta official I contacted told me the Stampede summit-lite was about “finding common ground and building a coalition of allies on priorities for Canada’s prosperity such as resource development, the establishment of economic corridors, and removing barriers to internal trade and labour mobility.”

This is, as colleague Jason Markusoff pointed out on Twitter, not that far from the pro-pipeline, anti-carbon-tax agenda that rather famously landed Kenney, Moe and Ford on the cover of Maclean’s last autumn. As I wrote back then, this is the sort of thing Kenney does: he’s a born networker who rallies as much support as he can for his positions. The idea here is to storm Saskatoon—with a cohort of colleagues that includes the host of the Saskatoon meeting, oddly enough—with a firm set of plans. Against the distracted mush most premiers usually bring to their summer meetings, it’ll be harder to resist.

It’s hard to blame most premiers for showing up with distracted mush, mind you. These are summer meetings, the last agenda item between sometimes bruising spring sittings of the provincial legislature (Hi, Doug Ford) and a sometimes very extended summer-into-late-autumn vacation from public scrutiny (Hi again, Doug Ford). It can be hard to come up with stuff to talk about. The agenda for this week’s Saskatoon meeting is generic. Listed items include immigration, trade, strategic infrastructure, strengthening the Arctic, health care sustainability, mental health and addictions. All worthy stuff.

RELATED: How to save Doug Ford’s government

But it’s easy to begin. What’s more telling is what endures, if anything. The “Initiatives” section of the premiers’ own web page includes links to a “Fiscal Arrangements Working Group,” whose last communiqué dates from four years ago; listless work on a “Canadian Energy Strategy” from 2015-2017; many updates on progress toward improving internal trade, which somehow never gets around to actually being improved; and updates from a Health Care Innovation Working Group, which has actually delivered some cost reductions on pharmaceuticals. By far the most consistent achievement of the Council of the Federation has been the administration of the Council of the Federation Literacy Awards, which I am not making up, for 14 consecutive years since 2005. If you’ve heard of the Council of the Federation Literacy Awards you’re ahead of me.

Debate on the premiers’ meetings usually holds that they’re a pillar of Canadian intergovernmentalism (the position normally taken by most premiers) or that they’re a menace to all that’s holy (the position normally taken by Andrew Coyne). I started out in the Coyne camp and have drifted closer to apathy over time. But clearly the agenda for these meetings is not normally so packed that it’s impossible for a single determined premier to make headway with his own preferred issues. Indeed, to the extent carbon taxation is a thing, it’s largely traceable to the rookie enthusiasms of Philippe Couillard, who started pushing climate change as an agenda item at every meeting after he was elected as Quebec’s premier in 2014.

It’s hard to imagine Kenney’s Stampede agenda going far among the colleagues who didn’t join him for dinner in Calgary. Resource development is popular up to a point, as is the establishment of “economic corridors,” but there’s little evidence that Quebec’s François Legault and British Columbia’s John Horgan will be more than polite as long as the resource in question is oil-sands bitumen or the corridors are meant to contain pipelines.

And the premiers who weren’t in Calgary will arrive in Saskatoon with their own druthers. Quebec’s Legault spent last year’s Quebec campaign swearing that immigration couldn’t fix the province’s labour shortage. He has since decided immigration can fix the province’s labour shortage, as long as it’s the right kind, and he will be seeking allies for that position. Reporters who cover these meetings—there are fewer every year—normally look for division among premiers, or for the lot of them ganging up on Ottawa, when they write about the conclusion of each summer meeting. What’s more common, less spectacular, and poisonous to the credibility of these meetings over time is the areas of bland agreement that none of the participants can take to the bank.