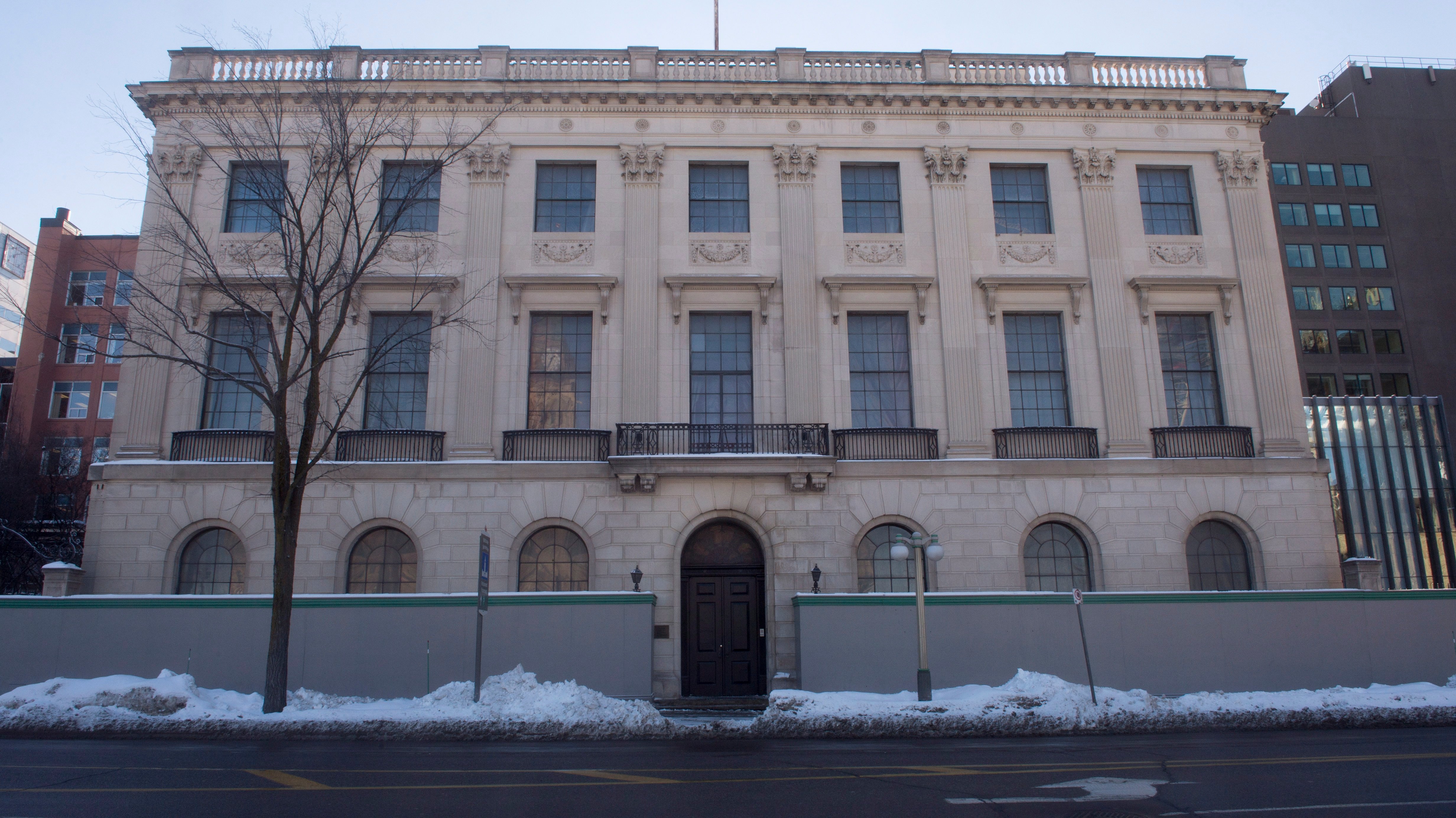 The former US Embassy is seen in downtown Ottawa, Thursday January 21, 2016 in Ottawa. THE CANADIAN PRESS/Adrian Wyld

When the United States gave up its handsome old embassy building in Ottawa, directly across the street from Parliament’s Peace Tower, nobody could have imagined that this prime piece of real estate would sit empty for nearly two decades.

Yet 100 Wellington St., a beaux-arts beauty built in 1932, has been a silent limestone-clad shell, surrounded by construction hoardings, since 1998. Soon after the Americans moved to a much bigger, new embassy building on the edge of Ottawa’s ByWard Market in 1999, the Liberal government of Jean Chrétien hatched a plan to convert the old embassy into a national portrait gallery, but that project was halted by Stephen Harper’s Conservatives.

This week, Public Services Minister Judy Foote announced a public consultation process on how to finally turn Canada’s most desirable vacant building into “a key Canadian institution.” From Aug. 18 to Sept. 9, Canadians will have a chance to vote online for their favourite of “several potential uses,” with the options slated to be presented at a public meeting on Aug. 18.

I called up Lilly Koltun, who was director general of Library and Archives Canada’s Portrait Gallery of Canada project from 2001 to 2010, to put this consultation process in context, and to ask if she thinks the idea she once championed is still compelling. This is our conversation, edited and condensed:

Q: With 100 Wellington Street back in the news after so many years, can you remind us of how the idea to turn the former U.S. embassy building into a portrait gallery was born?

A: The idea that Canada should have a portrait gallery is actually quite old, generations old. But it finally got going around the year 2000. It was because that building was available that [Chrétien’s Liberal government] began to be interested, in combination with people such as Sen. Serge Joyal becoming familiar with the amazing national portrait collection that [Library and Archives Canada] already had. As I recall, Sen. Joyal and Sen. Jerry Grafstein had an opportunity to speak to prime minister Chrétien and made the case for it. I understand it was instantly perceived as a wonderful way to use the building.

Q: For Canadians who haven’t seen the building, what makes it so appealing?

A: It’s such an iconic heritage structure itself and it’s in such a nationally important location for Canada—right across the street from Canada’s national Parliament, where people in effect are governing themselves. It would connect beautifully.

Q: I remember you spearheading the Portrait Gallery of Canada very enthusiastically. What was your involvement?

A: I was one of those behind-the-scenes people in the bureaucracy. I was head of the division that was responsible for the art and photography in Library and Archives Canada. My own background is as an art historian and a photography historian, so I recognized, and so did my staff, the extraordinary importance of this collection that was almost always in storage. There are thousands of paintings, drawings and prints and, in effect, millions of photographs. When the government did establish [the portrait gallery], they asked me to be interim director and afterwards I was confirmed as the director.

Q: You walked me around the empty building, I believe in 2002. I remember you showed me where the so-called “Four Indian Kings” would hang—a set of famous oil portraits of Iroquois Confederacy envoys painted in London when they visited Queen Anne in 1710.

A: Yes! In fact, what was so wonderful about that was that they would be in the room that was the former U.S. ambassador’s main office, which looked directly over Parliament Hill through these fabulous windows. There was a kind of wonderful nation-to-nation link. This special place was reserved, in effect, for recognizing the First Nations.

Q: We can’t talk about all the portraits in the collection. But visitors to Parliament Hill might have expected to see former prime ministers, that sort of thing.

A: Well, to a degree. But on the Hill there is already a wonderful gallery of formal and official portraits [of prime ministers]. We were planning to select certain major prime ministers—and this would have to regularly change, because the collection is so big and the space is so small—and show portraits that were unexpected of them. Not the official portraits. For Sir John A. Macdonald or Pierre Trudeau, for example, both of them had such long careers and were illustrated and photographed and painted so many ways, you could have fascinating and unusual and fun displays. For Trudeau, we had a paper dress that was part of Trudeaumania that had him on it.

Q: Before we move on to this week’s news, could you just comment on what happened when Stephen Harper’s Conservatives won power in 2006?

A: We had taken out a lot of the infrastructure on the inside of the building in preparation for installing the portrait gallery there. You have to change an office building into a public building. We were about to start digging the foundations for an addition. Then the government changed and by spring 2006, very quickly, the project was stopped.

They did not consult with me; I received no request to justify the project. They simply stopped it. There was a period where we went through options in perhaps nine other cities, which were offered the option of putting in proposals. But in about 2008, I believe, the government just came down and said, ‘We don’t want to support this.’ I basically said I would take my retirement after that point.

Q: The Liberal government has now announced that they are asking for public input on a new set of proposals for 100 Wellington St. Let me ask the obvious question: Do you think they should just go back to the portrait gallery idea?

A: That is the most astonishingly appropriate thing to so with that building. Canadians deserve to see the portrait collection that they have been amassing since the 1890s. My goodness—120 years of collecting and they still have no access? I believe nothing happened during the entire time the Conservatives were in office because they couldn’t think of anything better.

The thing about the portrait collection is that it is not just about a small part of Canada’s people. It’s not just about prime ministers. It’s about all Canadians, whether they were wealthy and well-known, or ordinary people who helped build the country in their particular ways. The collection is so rich, it covers all levels of society. How could something be a better present for Canada’s 150th birthday?