Canada's 20th prime minister wades back into foreign affairs, though the Harper government has distanced itself from his trip to meet Vladimir Putin 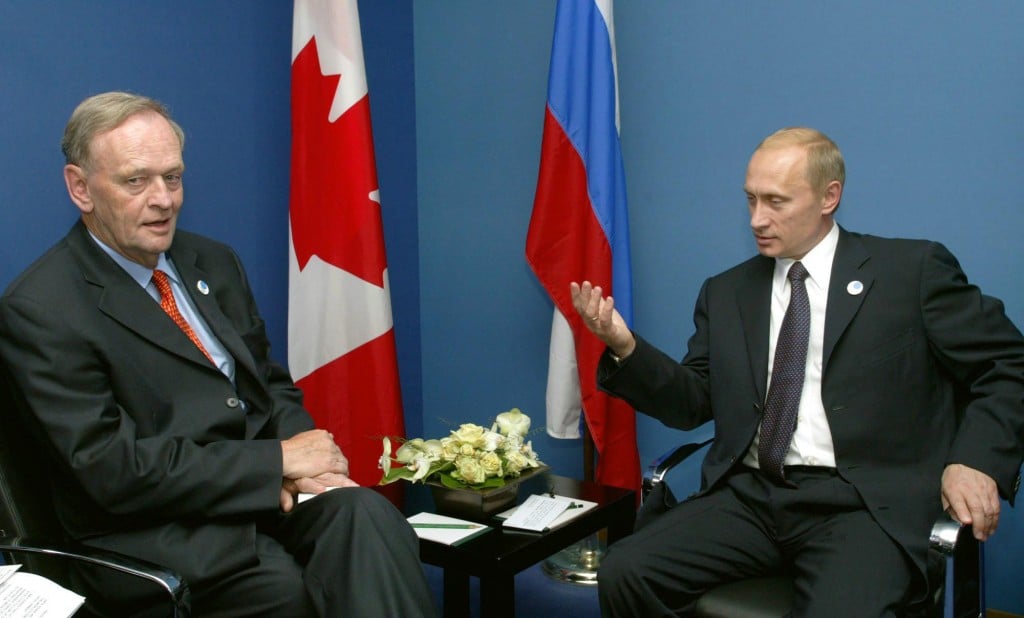 In this photo from 2003, Russian President Vladimir Putin, right, speaks with then-prime minister Jean Chretien during a bi-lateral meeting at the Hotel Royal in Evian, France, during a G8 summit.
(AP Photo/Misha Japaridze)

The West and Russia are locked in a tense and bitter stand-off, as if the Cold War has been revived. The Crimea Peninsula remains under Russian control and fighting continues in eastern Ukraine with pro-Russia rebels, while American, British and Canadian soldiers are training Ukrainian forces.

Into this moment of international drama and danger walks Jean Chrétien. The InterAction Council, an organization of former world leaders, has announced that the former prime minister will meet with Russian President Vladimir Putin ahead of the council’s upcoming meeting. The council is to discuss the state of relations between Russia and the West and Chrétien is to “report to the group on his discussions with the Russian president.”

Since leaving office a decade ago, Chrétien has periodically made news with his forays abroad. In 2004, along with the head of a Canadian oil company, he visited Turkmenistan to meet with Saparmurat Niyazov, that country’s late dictator. In 2013, Chrétien attended the funeral of Hugo Chavez, the controversial Venezuelan leader. He has also criticized the Harper government’s foreign policy.

Related: Which of our last three prime ministers has the best fiscal record?

Could Chrétien be the one to broker peace and understanding between Russia and the Western world? Canada’s 20th prime minister and the Putin government seem to be on decent terms. In January 2014, before the start of the current unpleasantness, Chrétien received Russia’s Order of Friendship in honour of “his substantial contribution to the strengthening and development of friendship and co-operation with the Russian Federation.”

The Harper government, a fierce critic of Putin, has made clear that Chrétien is not visiting Russia as a representative of Canada.