The next steps in Egypt

A Canadian expert discusses how to transition to democracy 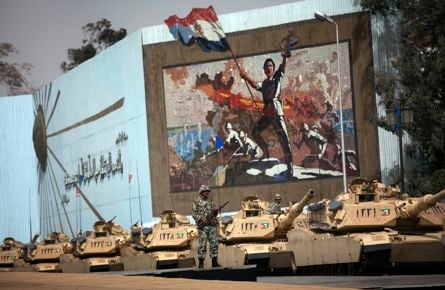 As public protests in Egypt give way to the behind-the-scenes negotiation of a new political order, most Westerners who’ve followed the exhilarating events there over the past few weeks can only wish the pro-democracy movement well.

But Leslie Campbell, the Canadian who has directed the Washington-based National Democratic Institute’s Middle East and North Africa programs since 1996, is among the few outside experts whose experience gives him detailed insight into the challenges ahead in Egypt—and whose job affords him a chance to offer practical help.

The NDI, a non-profit, non-partisan group that supports the growth of democratic institutions around the world, has been active in Egypt since 1995, and opened a permanent office there in 2004. Campbell has forged a direct relationship with Egypt’s political parties, most recently in the run-up to last fall’s rigged parliamentary elections. Among other things, NDI offers training to parties and independent election monitors.

He is traveling to Cairo today and spoke with me by telephone yesterday evening from Washington. One of his key aims is to put Egypt’s inspiring young democrats in contact with veterans of past successful shifts from dictatorship to democracy, notably by introducing them to leaders of the peaceful transitions that recast political life in Poland and Chile.

As well, he says NDI will be offering assistance as Egypt’s reformers, who are now engaged in talks with the country’s transitional military rulers,  develop concrete positions on the institutions they’ll need to forge before elections are held. An edited transcript of our conversation:

Q. What’s the state of the existing political parties in Egypt?

A. They are very tiny. Our main partners were people like Ayman Nour’s El-Ghad and the Democratic Front Party, led by Osama Al Ghazali Harb. Also, a party called Reform and Development, led by Anwar Sadat, nephew of the Anwar Sadat. We also work with Wafd Party, which has actually broken into factions. We always included the ruling party, the NDP. But I guess we’ve been most active with what you’d probably describe as the smaller, secular, small-l liberal parties.

Q. What about the Muslim Brotherhood?

A. They never really showed much of an interest. But, for example, I met with Mohammed Katatny, the head of their parliamentary bloc. We had what I would call a friendly relationship with them.

Q. What was it like trying to work with those smaller parties under Hosni Mubarak?

A. They’ve been held down by the emergency law. They haven’t been able to hold a public meeting for twenty years. It’s been illegal. You could apply to have a rally but it was routinely denied. When we’d hold a training seminar—get a hotel room and invite twenty people—it would be broken up by the security services. They have harassed our staff endlessly, called them in for interrogation. They didn’t shut us down per se, but they made it difficult for us to do anything.

Q. What motivated the small parties to persist through decades of dictatorship?

A. They assumed that political participation was eventually going to pay dividends. I was in Egypt not long before the November parliamentary election last year, and met with several of these party leaders. They were really split about boycotting. I had dinner with several of them and I was in favour of them participating. From my point of view, participating you win either way. If the election is run reasonably well, you make a few gains. If it’s a complete sham, then by participating and by us supporting domestic election monitors, it gets exposed as a sham. That’s even better.

Q. And was it a complete sham?

A. Totally. I think that’s what precipitated [the pro-democracy protests]. It hasn’t always shown up in the analysis, but the direct, proximate cause was that Egyptians were offended that the government didn’t even bother to pretend that the November election was good. It was utterly stolen. It was pure fraud.

Q. Did most Egyptians know this?

A. Yes. There are newspapers that are relatively independent.

Q. What must happen now if Egypt is to become a democracy?

A. The Egyptian people took this upon themselves. We were glued to our TVs and saw this inspirational turn of events. But for people who have been around for a long time, and seen other transitions, there are a number of lessons, whether it’s from Poland, Chile or Indonesia.

Q. So what is the key lesson?

A. It’s that you want to get the rules right before you have an election. You want to negotiate those rules and you want a broad-based negotiation. An election that happens too soon heavily favours groups that already have organization, a presence and a structure.

Q. And you don’t think the pro-democracy forces in Egypt have those key attributes yet?

A. The youth who were in the square, they don’t have a political party. They need to start, maybe not one party, but to join a coalition and form a political entity.

Q. Are there examples of that sort of cooperation across a range of reformers trying to usher in change?

A. What sets Chile apart in transitions is that the right and the left combined and coordinated and they were able to prevail. The point was uniting people across the spectrum. In Poland, the Solidarity-led coalition was broad, and they negotiated a transition with the military.

Q. And I understand you’re linking senior figures from both the Chilean and Polish experiences with the Egyptian reformers, although you’d rather not name them just now.

A. Yes. What we’ll do next week is use technology—Skype, video-conferencing, that sort of thing—to organize a few roundtables. So these guys will be the resource people. Then we’ll circulate information through social networks, and by the end of the month hold a few low-key meetings.

Q. Who are you hoping will benefit from these discussions?

A. What’s happening is the youth are meeting with the military now. They are great guys, these youth leaders. But do they have any clue what went into these transitions in the past? They are talking about a constitutional committee to rewrite the constitution. Phenomenally complicated. The choices they make now will have a huge impact.