Nine out of 10 world leaders agree: nationalism is terrible

Nov. 12: Trudeau, Macron and Merkel push back at Trump's isolationism and nationalism, while pressure builds on Canada's finance minister to address competitiveness concerns 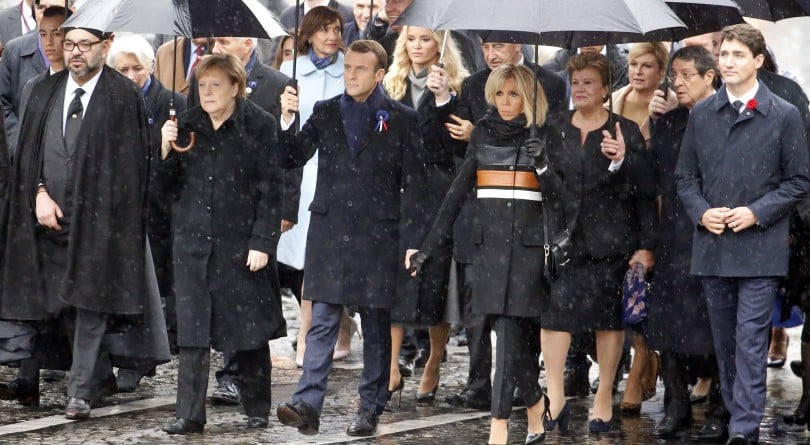 On the 100th anniversary of the end of WWI Justin Trudeau joined other world leaders in France to tilt against the nationalism and isolationism spreading across the world. Speaking at a Peace Forum in Paris, which self-proclaimed “nationalist” Donald Trump didn’t attend, Trudeau said attacks on the free press “undermine our trust in institutions and increase our cynicism … When people feel their institutions can’t protect them, they look for easy answers in populism, in nationalism, in closing borders, in shutting down trade, in xenophobia. (Canadian Press)

German Chancellor Angela Merkel shared similar sentiment: “Most of the challenges today cannot be solved by one nation alone, but together. That’s why we need a common approach. If isolation wasn’t the solution 100 years ago, how can it be today in such an interconnected world?” (Reuters)

Lastly, here’s part of the stirring speech French President Emmanuel Macron delivered at the commemorative ceremony Sunday, with Trump sitting nearby: “Patriotism is the exact opposite of nationalism. Nationalism is its betrayal. By pursuing our own interests first, with no regard to others, we erase the very thing that a nation holds most precious, that which gives it life and makes it great: its moral values.” (Washington Post)

Next week Finance Minister Bill Morneau will deliver his promised competitiveness plan to help Canadian businesses counter the effects of the Trump tax cuts. Companies are full of suggestions for Morneau, and the recent experiences of some businesses, like this manufacturer in London, Ont., offer a hint of what’s at stake:

Every week, Whitney says, he is courted by “very aggressive” American economic development officials — “state of Ohio, state of Nebraska, state of South Carolina, district of this or that” — trying to lure him to expand or move to the U.S.

They call or email with a hard sell: “‘We’ll give you free property taxes forever if you buy land and open up.’ ‘We’ll start a program in the local college specifically to train people to come and work in your business,’” Whitney said in an interview. (Toronto Star)

In sending sexually explicit images of himself to women online, Tony Clement exposed something inadequate: the level of security screening that members of the intelligence oversight committee undergo. As one former CSIS analyst told Global News: “I don’t know exactly what MPs and cabinet ministers go through in terms of their security clearance but I’d be very surprised if it’s nearly as detailed as what we went through at CSIS and CSE. I guess the question now becomes … should that change as far as Parliament is concerned?” (Global News)

Calgarians vote in a plebiscite tomorrow about whether they want to host the 2026 Winter Olympics. Though the vote is non-binding, it will signal whether the people of Calgary have seen their spirits moved by the prospect of hosting another Games, or their stomachs churned by the spectre of broken promises and cost overruns. (Canadian Press)

It’s not often the Trudeau government and the Trump administration find themselves on the same page these days. One exception was the decision by a Federal judge in Montana to block the Keystone XL pipeline: “We are committed to supporting our energy sector and the hard-working Canadians it employs,” a spokesperson for Canada’s resource minister said. “Our government has always supported the Keystone XL project, and we are disappointed by this decision.” As one might expect, Trump was more direct: “It’s a political decision made by a judge. I think it’s a disgrace. 48,000 jobs, I approved it, it’s ready to start.” (Digital Journal, CNN)