Number 10 and the impossibility of governing wisely

Paul Wells: From the U.K. to Canada to Australia, official residences are crumbling. What does that kind of government paralysis get you? 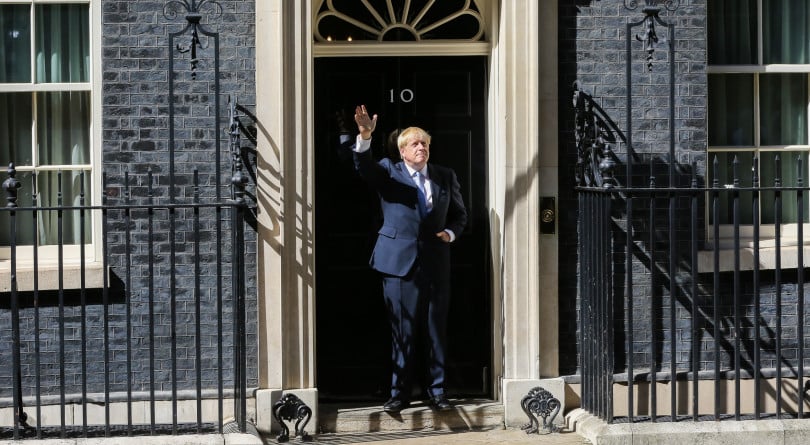 Johnson arrives on Downing Street in London on July 24, 2019, to address the media (Dinendra Haria/Anadolu Agency via Getty Images)

There will be a lot to discuss about Boris Johnson as the new British prime minister prepares to meet his destiny and perhaps his country’s. The physical state of his official residence is nowhere near the top on his list of problems.

But as Johnson, an incorrigible rake and bluffer, prepares to move into Number 10 Downing Street this week—or maybe Number 11—at any rate amid persistent rumours that he will need new furniture because he lost all of his in the divorce—it may come as some consolation to him that he won’t need to look in the mirror to see a shambolic wreck. Because he’ll be living in one.

I will explain. David Tennant, the Scottish actor who played Alec Hardy on Broadchurch and the villain Kilgrave on Jessica Jones, has a pretty good podcast on which he interviews, mostly, other actors. But he did an episode with Gordon Brown, who was a Labour prime minister of the U.K. and is a good Scot like Tennant. Partway through the podcast, Brown starts to remark about how Number 10 is collapsing and nobody can fix it.

“The whole place is falling down, let’s be honest,” Brown tells Tennant. “It needs to be completely gutted from top to bottom if it’s going to survive for another century.”

But that would take four years. The PM would have to live somewhere else in the meantime. They’re all so desperate to live at No. 10 that nobody will agree to move. “You say no,” Brown said. “Everyone admits it after they leave.” And probably it’s worse even than that, because fixing No. 10 would probably require parallel repairs to No. 11, the finance minister’s office (in fact, the PM sleeps at No. 11 and the Chancellor at No. 10, but anyway). So nothing gets better.

The parallels to Ottawa are obvious. The continuing inability to fix the Canadian Prime Minister’s residence at 24 Sussex Drive is vexing, because it leaves longtime Ottawa residents, at least, wondering whether any progress on anything is possible. So I was surprised and strangely encouraged to learn that the U.K. isn’t immune to this strange extended political deadlock on official residences.

In fact, the situation Brown described isn’t even new to London. This exhausting, fascinating U.K. government blog post detailing the 1957-1973 refurbishment of No. 10 is such a consummate comedy of errors that anyone reading it would be inclined never to attempt a complete renovation of an official residence. Reading it, one feels the giddy fascination any homeowner has experienced when told of a neighbour’s terrifying descent into a money pit.

The omens were ominous from the beginning. Harold Macmillan’s government hired a contractor who bid so low that they must have planned to take a loss in return for a chance to brag about the job later. They couldn’t do a proper site survey because Macmillan refused to move out of their way, and he was so eager to keep his absence from the residence as short as possible that he pressured the contractor into a ridiculously short time-line for repairs. Which turned out to be a problem. Dry rot and insect damage in the foundation made Number 10 a chronically leaning tower. “Apparently solid walls were held up only by the plaster covering them,” one report said.

It just goes on and on. Macmillan moves back in late 1963, basically in time to mark the end of his tenure as PM. By 1964 there’s dry rot everywhere, of the sort the six-year repair was supposed to fix. The residence isn’t definitively fixed until 1973. Which isn’t all that long ago, if you think that Gordon Brown, who moved there in 2007, reports disrepair as an eternal fact of life at Number 10. Figure they got 25 decent years out of the place, out of the last 60?

The extended inability to fix an official residence isn’t confined to Canada and Britain, either. There’s also the extended farce of repairs at the Australian PM’s residence. Here’s a forensic report from 2016 after the cost of the repairs to “The Lodge” more than tripled and blasted past all early deadlines.  “The breakdown of the contractual process and the lack of rigour around the extensive variations to the contract must call into question the present governance system for delivery of projects of this nature,” the report concludes. Translation: maybe governments just aren’t able to repair their own residences.

The competing strains here are obvious. An official residence is a piece of government equipment. It experiences wear and tear. It needs maintenance. But if you describe the things that need maintenance—the billiard lounge, the vast ornamental fireplace, and so on—it triggers many voters’ certainty that we are being milked so the swells can live like kings. So they delay. So the decay gets worse. And so on.

This helps explain why, as I checked one country after another, I found so many cases of official residences turning into quagmires. There are the cost increases and delays in repairs to the South African presidential residences. There’s the tripling of refurbishing costs of the prime minister’s residence in New Zealand. The valse-hésitation around 24 Sussex would seem to be a popular dance the world over.

This is interesting. In Canada, looking at only the Canadian case, readers are tempted to personalize the decay. It’s Justin Trudeau’s fault! The guy can’t make a decision! No, it’s Stephen Harper’s fault! He was so obsessed with living in 24 Sussex he forgot to make it livable! But it’s harder to sustain that argument unless you can explain why Justin Trudeau also botched the job in Canberra or Wellington. Maybe this is just the way of the world.

Now, taken by itself, who cares if governments in democracies are bad at making timely repairs to executive residences? Every country will always face an unlimited supply of more pressing problems.

But more broadly, if governments run other important and highly-visible files the way they run their landmarks upkeep, it could be a problem for the very legitimacy of government. And often they do.

In Britain a deadly fire in a subsidized-housing high-rise in 2017 served as a grisly reminder that nobody followed through after a 2009 fire killed a smaller number of people. In Canada years of good-faith effort by armies of well-meaning civil servants still haven’t ensured that government employees can be sure of getting paid. Since Jean Chrétien signed the ratification papers for the Kyoto accord in 2002, no Canadian federal government has come anywhere close to meeting its carbon emission targets.

This matters because people need to feel they can trust government to do things right. To do something right. If they don’t, they’re likely to withdraw their support from the parties and governments that always claim to have answers and expertise, and make surprising choices instead.

In his keynote speech to the Liberal convention in Montreal in February 2014, Justin Trudeau made pretty much that argument.  “The growth we have seen over the past three decades has been the product of a broadly supported agenda,” he said: “Investments in education, fiscal discipline, openness to trade. All of which the middle class voted for, repeatedly.

“Here’s the point: The original promise of that agenda was that everyone would share in the prosperity that it creates. That hasn’t happened. That’s not a political point. It’s a fact. If we don’t fix it, the middle class will stop supporting a growth agenda.”

At the time, a few of us scribes were curious about how a middle class withdraws its support for (what bills itself as) a growth agenda. Since then, in the election of Donald Trump, the victory of Brexit and, to some extent, the rise of Boris Johnson to life on a borrowed cot in a collapsing old house, we’ve had some answers.

Am I saying the PM’s residence needs a nice cleanup or the barbarians will be at the gates? Nothing that straightforward. I’m saying that official residences, and the chronic inability of different governments in different circumstances to make rational decisions about them, are a proxy for all the other ways governing can be harder than it looks. This should inspire a measure of humility in aspiring leaders. If they go home every night to a home that’s falling apart and which they’re afraid to fix, perhaps this is the gods warning them against empty promises.