Numbers over narrative: The truth about Oct. 19

The niqab issue may not have sunk the NDP in Quebec, and voters didn’t abandon Stephen Harper. Pollsters sift through the data for nuggets of election truth

It doesn’t take long for an election saga’s main plot elements to fall into place. You might reasonably assume Stephen Harper couldn’t hold his 2011 vote, or have heard that the niqab issue dealt a fatal blow to Tom Mulcair’s NDP on his Quebec home turf, or that Justin Trudeau won on a youth wave. But pollsters sifting through the data are already raising doubts about these and other key pieces of early conventional wisdom on the 2015 campaign.

What happened to Harper’s total vote? While he sure lost the election, the outgoing Prime Minister seems to have preserved much of his Tory base. The total number of Canadians who voted on Oct. 19 rose to 17.6 million, or 2.8 million more than marked a ballot in 2011. The Conservative share of the popular vote was down a punishing 7.7 per cent, but the party shed only 231,905 actual votes. “That means they did a pretty good job of holding onto their old support but, instead, lost big because of the rush of new voters this time,” says pollster David Coletto, chief executive of the firm Abacus Data.

On his way to dramatically increasing the Liberal share of the vote, Trudeau lifted the total number of votes cast for his party’s candidates to 6.9 million in the 2015 election, up a massive 4.1 million over 2011. “[The Conservatives] tried to defend market share, but were doing so when the market itself was expanding,” Coletto says. The Liberals took the opposite approach, aiming to substantially grow the number of Canadian voters, rather than merely do better among those who turned out to vote in 2011. As Coletto puts it, “If you can’t win in the current market, build a new one.”

Who ended up shifting to Trudeau? If Harper held most of his 2011 vote, that doesn’t mean there wasn’t serious churn during the 2015 campaign. Much of that movement came late in the race, according to pollster Frank Graves, president of Ekos Research, and had the effect of giving the Liberals a much broader base by election day—less reliant, for instance, on younger voters. Graves says narrow policy questions that tend to divide voters by age, or along other demographic lines, grew less important as the long campaign progressed. “It was supposed to be an election about the economy and turned into an election about values,” he says.

According to post-election Ekos polling, about a quarter of all voters say they made up their minds in the final week, including a “much more engaged and motivated centre-left shifting to the Liberals.” More surprisingly, though, Graves says about 18 per cent of Canadians who had been leaning toward voting Conservative up to that late stage, switched to the Liberals in the last seven days. Key in this group were Ontario seniors, including many who saw a Liberal viral video and TV ad, in which Hazel McCallion, the legendary 94-year-old former mayor of Mississauga, Ont., slammed Harper.

Earlier in the campaign, Ekos polling had the Tories more than 15 percentage points ahead of the Liberals among voters 65 and older. By the final days, Trudeau actually surged ahead of Harper among seniors. “In fact, the Liberals had almost no differentiation by age in their vote,” Graves says. “It was not generationally split at all.” In other words, they won in every age group. 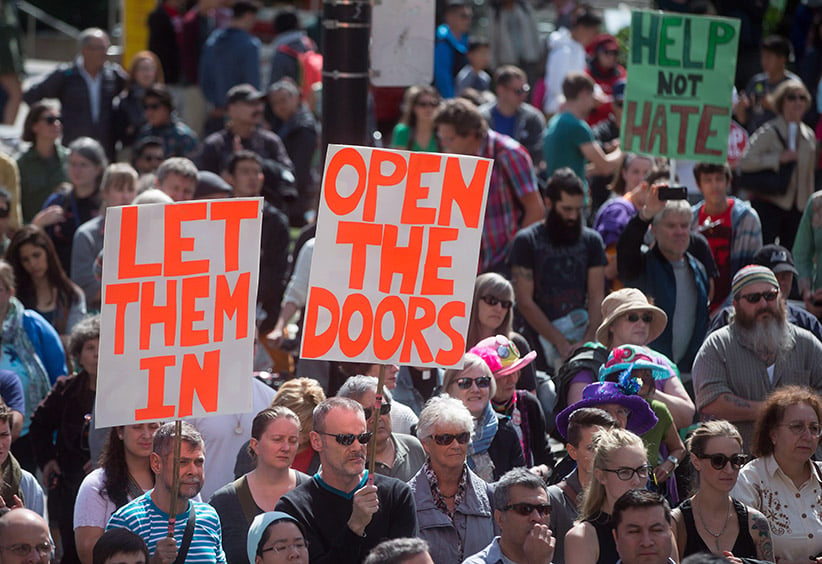 People hold signs as hundreds gather for a rally organized by the local Kurdish community to call on the Canadian government to allow more Syrian refugees into the country, in Vancouver, B.C., on Sunday, September 6, 2015. (DARRYL DYCK/CP)

What exactly knocked Mulcair out? On Sept. 15, federal judges dismissed the Harper government’s bid to force an immigrant from Pakistan to take off her niqab—the veil worn by a small minority of Muslim women—in order to swear her citizenship oath. Suddenly, the issue seemed to dominate the campaign. In Quebec, where opinion runs strongly against the niqab, Mulcair’s opposition to the Tory stance appeared to badly hurt the NDP. In fact, some NDP insiders claim they never really recovered.

Innovative Research pollster Greg Lyle doesn’t see it that way. Although Lyle’s polling showed the niqab issue jolted about 10 per cent of Quebec voters out of the undecided column into the anti-niqab Bloc Québécois’s camp, it found that already-decided NDP voters in Quebec stuck with Mulcair through the uproar. But why did Trudeau, who also staunchly opposed Harper’s niqab ban, seem to benefit? Lyle argues the issue didn’t directly move the Liberal vote in Quebec. It only distracted attention from deeper, more consequential changes in voter opinion. According to Innovative Research’s polling of voter attitudes on key issues, in the same week the niqab issue exploded, the Liberals had just made big gains when Quebec voters were asked which party they thought was most likely to protect the middle class and create jobs. “The Liberals strengthened their brand, which set them up to grow their vote,” Lyle says. “The debate over the niqab faded, and Quebecers turned to the same issues as the rest of Canadians—who’s going to deliver change, and who’s going to make a stronger economy.”