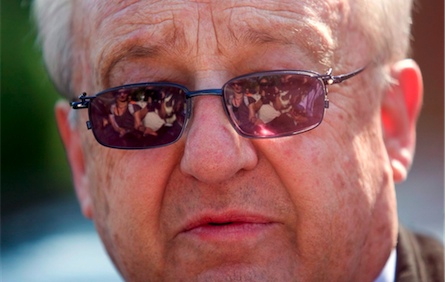 The Toronto Star was on the scene to cover the star of Canada’s longest running extradition saga as he rolled up at the Toronto West Detention Centre:

[Schreiber] arrived at around 4:45 p.m., exiting a taxi and declaring to reporters that they had just witnessed the “biggest political justice scandal in history.” […]

Schreiber was not able to say exactly when he’ll be extradited, and numerous attempts to contact the Ministry of Justice have gone unanswered.

He did say, however, that he has big news to share with the Canadian media.

“But I have to be careful at the moment,” he said.

Oh, what can it be? The suspense, how it kills ITQ.

UPDATE: And he’s off, according to CTV:

Karlheinz Schreiber has been handed over to German authorities and is now en route to Germany, ending the embattled businessman’s 10-year fight to avoid extradition.

“On August 2, 2009, Mr. Schreiber was surrendered to Germany in accordance with the valid surrender order issued against him on October 31, 2004 by former Minister of Justice, Irwin Cotler,” Nicholson said. “Over a 10-year period, Mr. Schreiber was given every reasonable opportunity to challenge his extradition. His surrender to Germany was in full accord with the law and consistent with the spirit and purpose of extradition.”

FILED UNDER: but who will think of the obese children? Karlheinz Schreiber mills of justice grind slowly except on a holiday long weekend to germany with apologies for the delay