On Castro's death, a look at Fidel and Pierre—and Justin

Author Robert Wright, who explored the Trudeau-Castro bond, explains it in the context of our present day 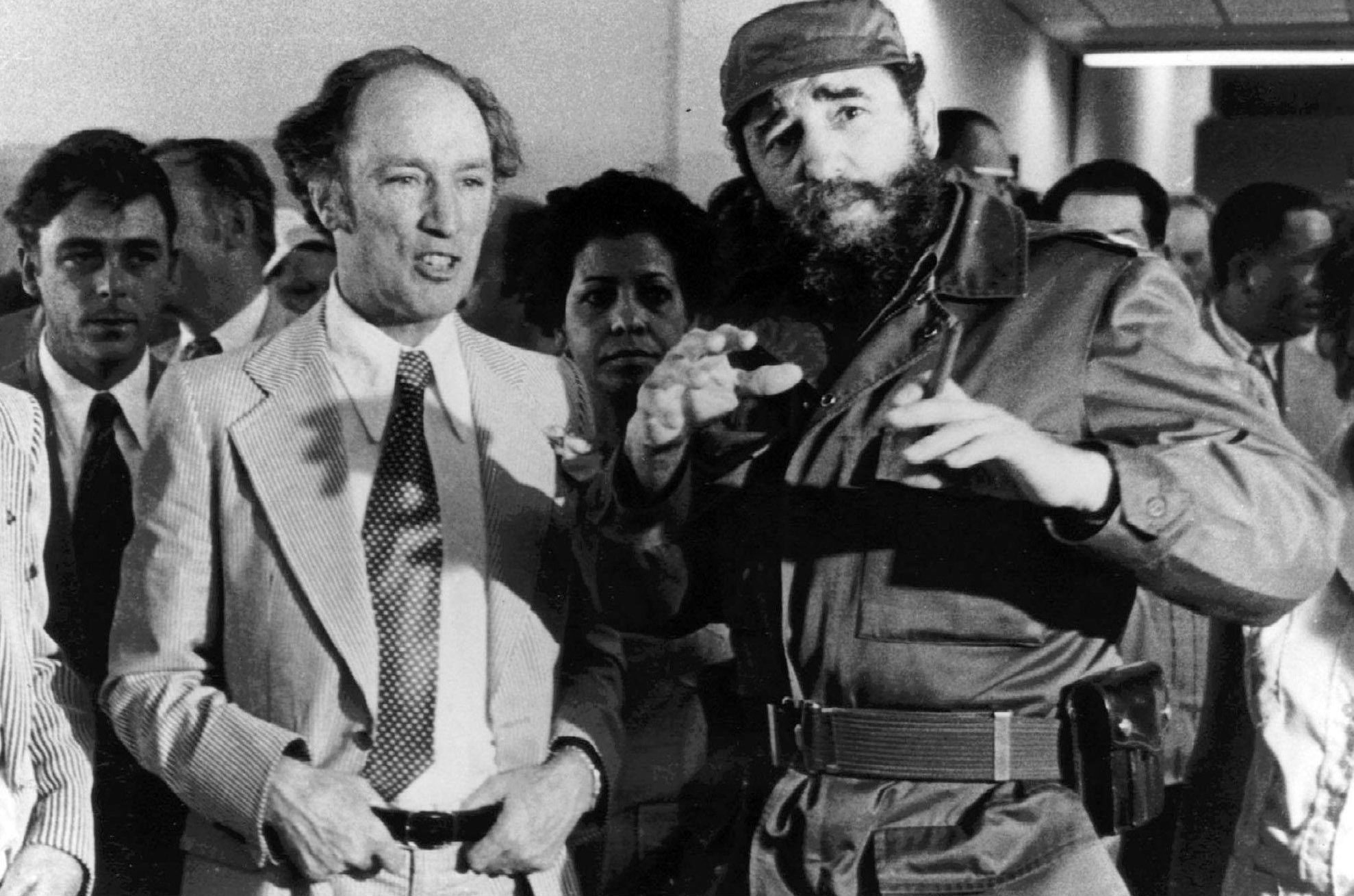 Prime Minister Pierre Trudeau looks on as Cuban President Fidel Castro gestures during a visit in Havana on Jan. 27, 1976. THE CANADIAN PRESS/Fred Chartrand

The death of Fidel Castro, at age 90, will trigger complex memories in many Canadians old enough to remember then-prime minister Pierre Trudeau’s landmark 1976 visit to meet with the Cuban president.

The friendship between the two leaders was the subject of fascination from the start, and generated controversy that continues even beyond their deaths. Prime Minister Justin Trudeau’s statement today on the death of his father’s friend has been read by critics as far too generous toward a dictator.

For insights into the story of Pierre Trudeau and Fidel Castro, I spoke today with Robert Wright, a professor of history at Trent University in Peterborough, Ont., and author of Three Nights in Havana: Pierre Trudeau, Fidel Castro and the Cold War World. (Wright’s most recent book is Trudeaumania, reviewed here.)

A: Trudeau believed he was one jump ahead of the Americans, as he had been when he regularized relations with China a few years earlier. It turned out that he was wrong in that estimation. By 1976, Fidel Castro, virtually on his own personal initiative, was pouring Cuban troops into the African state of Angola. So by the time Pierre Trudeau got to Havana in 1976, he was on the wrong side of Canadian public opinion, and when he got back Canadians made no secret of that.

Q: Yet the trip is remembered, at least by some, as a huge success.

A: When he was there—partly because he was in the company of his wife Margaret Trudeau, and they had their then 4½-month-old baby Michel with them—he established a very warm rapport with Fidel Castro. The two men plainly appreciated and respected each other’s intellectual pedigree, and courage, and that sort of thing, which was surprising to people who knew both men as sort of cerebral and self-contained.

They hit it right off. They developed a very close personal relationship, which persisted into the 1990s, when Pierre Trudeau was retired from politics and they became, as it were, the best of friends—very serious ideological disagreements notwithstanding.

Q: I want to ask more about their relationship, but could we go back for a moment to the basis of the visit. You suggest Trudeau hoped to duplicate the success he’d had in opening up relations with China in 1973. Was going to Cuba a foreign-policy move, then, or did Trudeau’s personal curiosity about Castro, or even some sense of affinity, play a role even before they met?

A: That’s an excellent question. It turns out that Ottawa diplomats and in particular his foreign policy advisers tried to talk him out of it. So you’re asking a question that goes to Trudeau’s own strength of conviction and his own determined personality. He believed that one must see the “humanity of the enemy.” This is a phrase that’s attributable to Trudeau.

At the height of the Cold War, what one did was to try to see the humanity of one’s nominal enemies. An analogy is Ronald Reagan’s discovery of Mikhail Gorbachev in the 1980s, when everybody sort of at once found that the Soviets could be dealt with from the point of view of their, quote, humanity, end quote. And some of those Cold War tensions could be ratcheted down.

My feeling about Trudeau in 1976 is that he had already convinced himself that it was an extremely important gesture at the height of the Cold War, when the United States had no diplomatic relationship with Cuba, to go to look around, to see what life was like there, and to sound out Fidel Castro—not presuming that he would change Castro’s mind on anything substantive, or have his own mind changed, but rather that it was the right thing. The aim was to try to ratchet down tensions and create the kind of atmosphere in which it was possible to have a dialogue with one’s nominal enemy.

Q: Let’s talk about the atmosphere in Cuba back then. You write about the crowds that greeted Trudeau. How important was that moment to Cubans?

A: It resonates right into the present. When you go to Havana and you talk to anybody over roughly the age of 45 or 50, there’s a constant refrain: Cubans of that age or older remember the visit as a real milestone in the declining isolation of Cuba in the hemisphere and in world relations in general. But, more than that, there’s a sense of real pride and warmth about Pierre Trudeau. He caught it when he was there: Once or twice he said he would never be as warmly welcomed back in Canada.

But also the there’s an aspersion that’s been cast on the state visit—and I think there’s legitimacy in it—that Fidel Castro orchestrated or stage-managed it very much to his own advantage. Critics of Trudeau and Castro say that the massive crowds of some 200,000 to 250,000 Cubans lining the streets to welcome Trudeau, really, were rented crowds.

Q: Do you think that’s true?

A: I think it’s probably a little bit of both. But it’s very hard to tell. One thing I would say is that Cubans do seem to hold Pierre Trudeau in genuinely high esteem. When one goes back to Havana, and I’ve gone back many, many times, Cubans reminisce very warmly about Pierre Trudeau. It’s the real thing.

Q: I don’t want to leave those three nights in 1976 without asking about Margaret Trudeau. Where does she fit in the picture?

A: We know things now about what Margaret was going through, the kinds of stresses she carried with her, that Canadians did not know at that time. On some of her more eccentric behaviour on that trip—for example, singing to the wife of the president of Venezuela, and what was then thought to be her flower-child persona—we know she was under a great deal of stress. A lot of it had to do with bona fide mental health issues, which nobody understood her to be suffering in those days.

Q: It seemed exciting and glamorous, but now maybe is more likely to elicit sympathy.

A: That’s right, although you know, as everybody has observed from the photographs and the moving images of that period, she really was radiant. She was very young, of course, and beautiful, and she was attending with Pierre in the company of her newborn baby. It was very endearing. 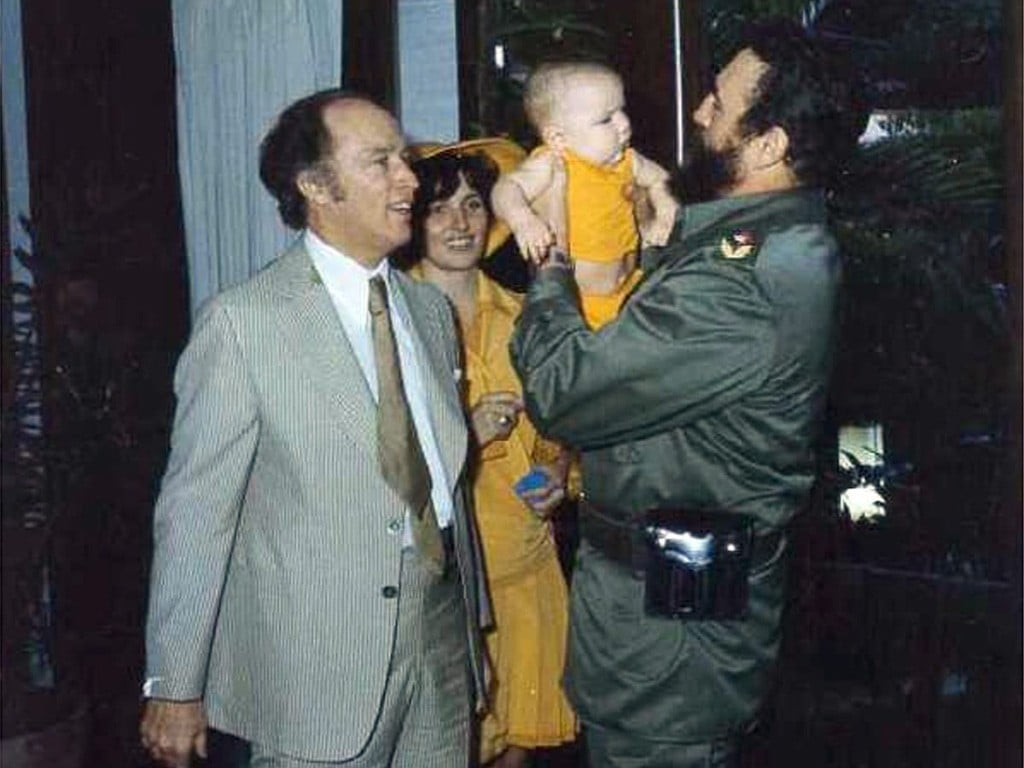 Cuban President Fidel Castro holds baby Michel as Pierre and Margaret Trudeau look on during their state visit to Cuba in 1976. (CP)

Q: That baby was Michel, the youngest brother of Prime Minister Justin Trudeau. He died as a young man in an avalanche in British Columbia. It’s poignant to think back on the impression he made as a baby in Havana.

A: Oh, it was crucial. Everybody I interviewed for Three Nights in Havana, including many of the leading diplomats on both sides, said the real catalyst for the warmth in the Trudeau-Castro relationship was Michel. It was the moment when Pierre Trudeau and Margaret, holding Michel, came down the stairs of the plane, and there was Fidel at the foot of the stairs, ready quite literally to take Michel in his arms. And he made a great scene about issuing him an identity badge.

There are many, many photographs taken of Fidel Castro holding the baby. And in those photographs you can see that Pierre Trudeau is very moved. He’s not indifferent—he really was touched by that.

Q: Let me ask you directly about those who criticize this relationship, both its foreign-policy aspects and its personal side. Should Canadians view this whole thing as embarrassing? There are many people who say this story amounts to giving far too much credit to Castro, who was, after all, a repressive dictator. This has come up again today because of Prime Minister Trudeau’s official statement on Castro’s death.

A: Justin Trudeau has inherited a very difficult position on the Cuba file. First of all, as he demonstrated when he was there for his official visit less than two weeks ago, he speaks as his father’s son, and he acknowledges and celebrates Pierre Trudeau’s relationship with Fidel Castro. And he is willing to make similar statements about the special relationship between Cubans and Canadians.

So there’s that inheritance, that Canada has a unique relationship with Cuba, and one that has never been broken off—not even under the worst kind of pressure from the U.S. And yet it’s 2016. I think the agenda has changed. Look, for example, at the criteria by which Americans, and some Canadians, object to the current government of Cuba. It’s about governance issues and human rights, in particular the right of dissenters to criticize the government.

When Pierre Trudeau was in Cuba, that agenda was almost nowhere to be seen. That was the Cold War context, and it’s very different now. So I think Justin Trudeau is going to have a much tougher time on the knife edge than his father did. I think it’s a difficult balancing act for the Canadian Prime Minister, in 2016, to offer warm condolences on behalf of all Canadians on the passing of Fidel Castro and not draw a lot of heat, on the grounds that the reforms everybody had hoped would characterize the new Cuba, particularly after U.S. President Barack Obama opened up the relationship in 2014, have not happened.