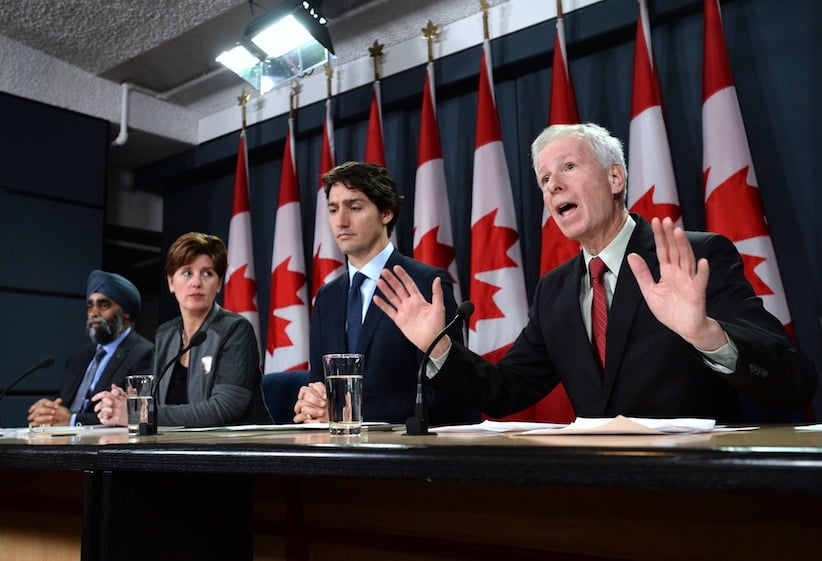 Minister of Foreign Affairs Stephane Dion delivers a statement as he is joined by Prime Minister Justin Trudeau, right to left, Minister of International Development and La Francophonie Marie-Claude Bibeau and Minister of National Defence Harjit Sajjan during a press conference at the National Press Theatre in Ottawa on Monday, Feb. 8, 2016. (Sean Kilpatrick/CP)

It’s not often that Justin Trudeau is upstaged when it comes to conveying a message, but the Prime Minister was clearly not the most compelling communicator today for his government’s new position on the fight against the so-called Islamic State.

Trudeau showed up at the National Press Theatre, just off Parliament Hill, to explain why he is pulling out the six Canadian fighter jets that have been bombing the terrorist group, also known as ISIS or ISIL, in favour of stepping up Canadian training of the Kurdish forces opposing them in northern Iraq, along with boosting other military, humanitarian and diplomatic efforts.

Trudeau began his answer, as he so often does, by talking about what he’s hearing from ordinary folks. “The conversations I’ve had with Canadians, not just over the past months, but indeed over the past years, reinforces that Canadians do feel it’s extremely important to remain active members of the coalition fighting ISIL in whatever ways we best can,” he said.

That sounded as if Canadians might have told him they’d just as soon the CF-18s stayed in the fight. But Trudeau went on: “And there’s no question, as I said, that there is a role for bombing, particularly in the short term. But Canada has many advantages, including hard-earned abilities on training local troops that we gained through 10 years in Afghanistan and in other theatres, where we can actually offer the best help in a different way.”

That wasn’t all he had to say on the subject, but it didn’t get any clearer. He seemed to be saying—not that Canadians are against bombing, not that bombing isn’t necessary—but that air war isn’t Canada’s strong suit. Which seems odd, since today he also announced that he is leaving Canada’s refuelling and surveillance aircraft in service with the coalition, while actually stepping up Canada’s expert help in identifying precisely the right Islamic State targets for other coalition members to bomb.

After Trudeau and the three cabinet ministers he brought along for support finished up, Chief of the Defence Staff Jonathan Vance took over the National Press Theatre. Not surprisingly, the general didn’t allude to public opinion. Instead, he framed the decision to pull out the CF-18s and ramp up training in terms of what’s actually going on in Iraq and Syria. 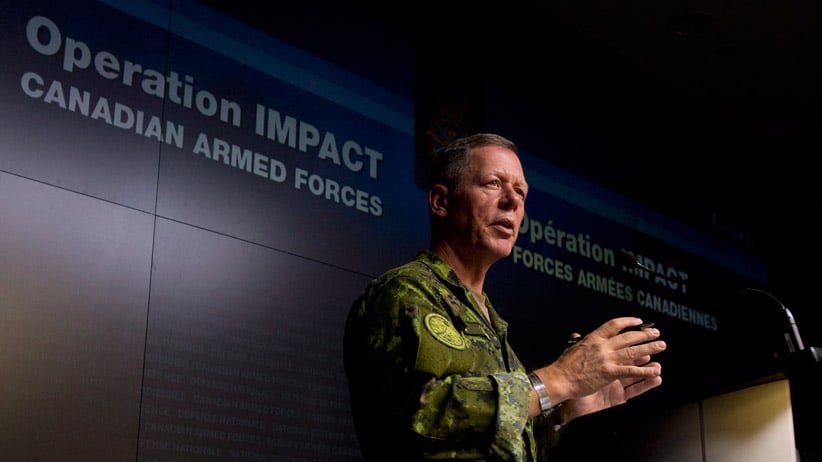 He explained that when Canada first sent its CF-18s on the mission, back in late 2014, the fear was that Islamic State forces might take Baghdad itself. He expressed pride in how the CF-18s helped stop the terrorist group’s advance on Iraq’s capital and put it on the defensive.

But now, Vance said, the core objective is changing. “We’re going to take this point in time in the campaign, where it’s essential to really put additional effort, intensify the effort, on ground operations against ISIL. And this is precisely what we’re doing.”

He went so far as the call the transition a “wise, useful move,” although he cautioned that tripling the number of Canadian troops helping train, advise and assist the Kurdish forces brings serious risks. “You put more people on the ground in a dangerous place, and it is riskier overall,” he declared.

Vance didn’t really explain why pulling the CF-18s is necessary, but at least he made a plainly worded case for now as a suitable time for a bigger emphasis on the ground war. It wasn’t about Canada’s supposed strengths and weaknesses, but about the nature of the conflict. His repeated warnings about the dangers Canadian trainers helping Kurdish fighters near the front lines will face came off as candid.

Minutes before, in the same room, Trudeau had sounded unwilling to directly address the basic questions. Since about the midway point of last year’s election campaign, press and public alike have often marvelled at his ability to communicate. He should be thankful today, though, that his top general was able to turn a convoluted message into something a little closer to convincing.