On the front lines of the equalization wars

Politics Insider for Dec. 11: It's good that Canada finally took a stand on Huawei, Trudeau has an Alberta problem and O'Regan's awkward story time for soldiers 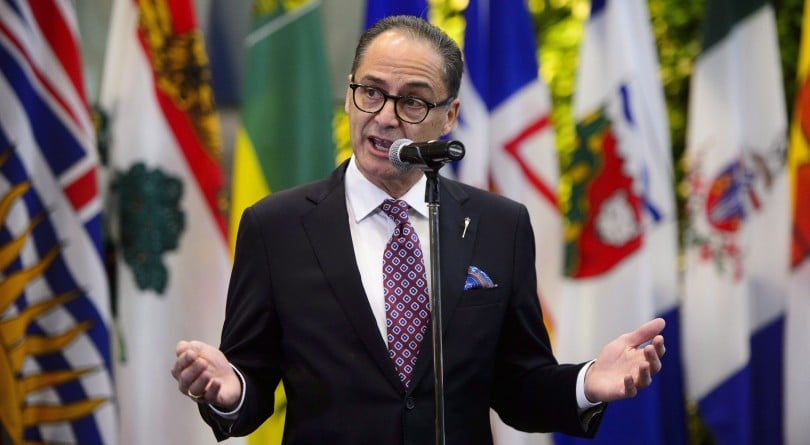 Alberta Finance Minister Joe Ceci talks to reporters prior to a meeting with Finance Minister Bill Morneau and fellow provincial and territorial counterparts in Ottawa on Monday, Dec. 10 2018. THE CANADIAN PRESS/Sean Kilpatrick

Terry Glavin has no time for those who argue the arrest of Huawei CFO Meng Wanzhou makes Canada a pawn in the Trump administration’s trade war with China, or that China’s outlandish retaliatory threats reflect the regime not knowing how things operate in nations governed by the rule of law. He writes:

Neither was her arrest a “kidnapping,” as the Chinese commerce department bureaucrat Wei Xinyu claimed in the party-owned newspaper Global Times. In the most comically intemperate language, Chinese diplomats have demanded that Canada release Meng immediately, to assuage China’s “hurt feelings.” Over the weekend, China’s deputy foreign minister Le Yucheng threatened Canadians with “serious consequences” unless we do what we’re told.

They should all be told to pound sand, of course, but it is perfectly understandable that Beijing would feel free to take this sort of tone. Among the G7 countries, Canada has adopted a uniquely supine posture in its relations with Beijing and its legions of creepy billionaires. Unlike Canada, our partners in the “Five Eyes” intelligence alliance—the U.S., Australia, New Zealand, the United Kingdom—have not been slobbering on Huawei’s slippers all these years. (Maclean’s)

In the latest on the case Meng has offered to wear a tracking device if she’s granted bail, while China has continued its over-the-top rhetoric, calling Meng’s arrest “inhumane“. (Globe and Mail, Global News)

An Alberta strategist predicts the federal Liberals will be wiped out in the province in the next election, such is the anger felt there toward the Trudeau government: “Alberta is angry. It is as angry as I have ever seen it, and it’s hard for an incumbent party when the population is [this] angry.” (Hill Times)

Each moment brings another wedge between the province and Ottawa—from Alberta resentment over Ottawa’s failure to get a pipeline built to Ottawa’s tepid response to the latest oil price crisis to Justin Trudeau’s comments while at the G20 about the danger to women from men at rural construction camps.

The latest split: the breakdown, released Sunday evening, of who’ll get what  and who’ll get squat from equalization payments in 2019/20. With Quebec in line to receive $13 billion while the oil-producing provinces Alberta, Saskatchewan and Newfoundland will get naught, anger flared up again. (Globe and Mail)

The loudest heckles came from Alberta UCP leader Jason Kenney, on Twitter: “So after unilaterally cancelling this year’s planned equalization talks, Justin Trudeau’s finance minister says the issue can be revisited – in FOUR YEARS. Meanwhile, suffering Alberta continues to transfer wealth to a province blocking the source of our wealth. Truly outrageous.” (Twitter)

Standing before a roomful of soldiers to announce new transition services to help soldiers adjust to life after the military, Veterans Affairs Minister Seamus O’Regan decided it was a good time to share his own “very difficult transition”: leaving journalism for politics. Not surprisingly, it didn’t go over well. “Good Lord, what an insensitive and inaccurate thing to say,” one former soldier told the CBC. “It shows me he has no concept of what he is dealing with.” (CBC News)