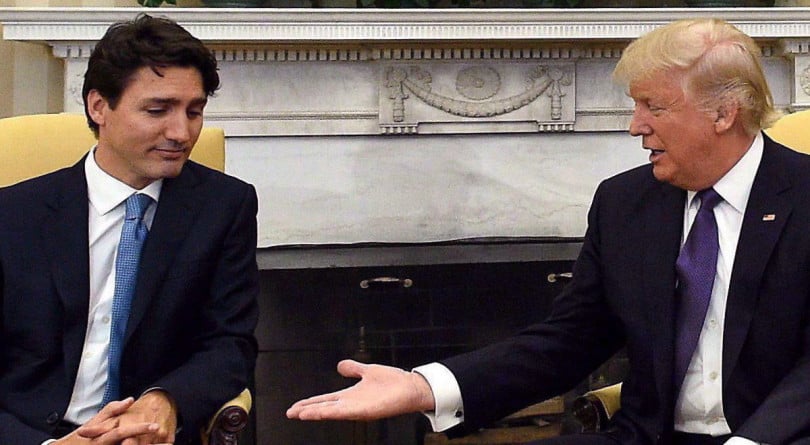 Prime Minister Justin Trudeau meets with US President Donald Trump in the Oval Office of the White House in Washington, DC on Monday, Feb. 13, 2017. (Sean Kilpatrick/CP)

Did someone forward you this newsletter? Sign up here to get it delivered weekday mornings.

And now the easy part, maybe: After grappling with the White House on the initial deal to replace NAFTA, and then finally winning over Democrats in Congress with a few modifications, the USMCA/CUSMA deal is ready to be ratified. The question is will Justin Trudeau’s Liberals try to get the job done before Christmas? Trudeau said he promised U.S. President Donald Trump and Mexican President Andres Manuel Lopez Obrador that Canada will move quickly, but that might be an easier promise to make than to deliver. The minority Liberals need to win over one of the three main opposition parties but the government got a big boost Wednesday when both the head of Canada’s aluminum sector and former Conservative cabinet minister James Moore.

The smog of war: A day after Jason Kenney wrapped up a meeting with Trudeau, which the Alberta premier described as “frank” and “realistic,” it was back to the battlefield. Kenney’s much touted oilsands information “war room” got its launch Wednesday, renamed as the Canadian Energy Centre. Complete with a $30-million budget, paid for in part from carbon taxes on large emitters, the initiative will target investors in international cities with the message that “Canadian oil and gas makes the world a better place”— though Canada is apparently no longer a place for one more energy giant, after Chevron said it’s looking to bail on its 50 per cent stake in  the Kitimat LNG project in B.C..

Canada utterly failed in Afghanistan. Why can’t we say this out loud? For more than a decade we watched this main event get worse and knew we were losing, writes Scott Gilmore. Yet in Ottawa it’s like it never happened:

Our largest failures are usually the ones we are least willing to acknowledge, even to ourselves. And, few failures have been as large as Canada’s misadventure’s in Afghanistan. Which may explain why we never discuss the war. Our national silence says it all.

Over 40,000 Canadian soldiers served in Afghanistan, making it our largest military deployment since the Korean War. We spent $2.2 billion in assistance spending trying to rebuild the country–Canada’s largest aid program in history. And our diplomatic strategy around the world, for the better part of a decade, pivoted on the war, and what it meant to our alliances and bilateral relations.

Afghanistan was not a sideshow—it was the main event for Canada, for over a decade. And yet, we don’t talk about it. Ever. Read more ››

These people have a country to run: Four key figures in Finland’s new government are women in their 30s, including the world’s youngest PM. It’s a profound changing of the guard, writes Shannon Proudfoot:

Within Finland and among close observers of the country’s politics, the gender of the new prime minister and her leading ministers is unremarkable, but their age is, representing a profound generational changing of the guard.

[Prime Minister Sanna] Marin, however, seems to have no time for the demographic fixation. “My thoughts have been in the proceedings and I have not followed the international and national media coverage,” she told reporters. “We have promised change. Now we need action. I believe that trust will return through action.” Read more ››

Sound off: Help us better understand what you’d like from the Maclean’s Politics Insider newsletter. This short survey will only take a few minutes to complete. We really appreciate the feedback.