Ottawa is 'looking into' New Brunswick's cheerful promotion of pot

Cannabis NB's website shows happy people and touts weed as a part of poker games and a 'girls' night out'. But the feds have stepped in and changes are coming 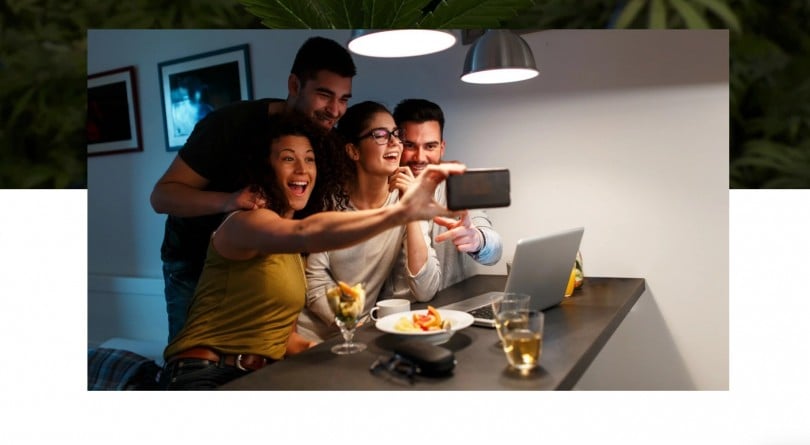 The New Brunswick government’s website for selling pot online, run by Cannabis NB, a subsidiary of the province’s liquor corporation, attracted amused attention this week for offering helpful step-by-step how-to instructions on rolling the perfect joint. It was taken as a sign of the times—a government agency providing practical advice just as the Oct. 17 date for weed becoming legal across Canada rolls around.

For lawyers and entrepreneurs trying to sort out how the new federal law on promoting cannabis will apply, however, the Cannabis NB website raised eyebrows for reasons that likely didn’t strike casual browsers as unusual. For starters, the site features a picture of a group of photogenic young people smiling into a smartphone camera one of them holds at arm’s length, and another of a serene woman holding a yoga pose, and a third of a bearded hipster mulling over something he’s writing.

What’s unusual about any these generic lifestyle advertising images? Nothing, unless you’re familiar with what the new Cannabis Act doesn’t allow. Among other prohibitions, it forbids promoting cannabis “by means of the depiction of a person, character or animal, whether real or fictional.” And the selfie-taking gang, the yoga woman, the creative-looking bearded guy—they all look like persons. “You can’t depict people, period,” says Trina Fraser, a cannabis law specialist at the Ottawa firm Brazeau Seller Law.

The office of federal Health Minister Ginette Petitpas Taylor, who is responsible for the Liberal government’s oversight of the cannabis promotion rules, was cautious in responding to Maclean’s questions on the Cannabis NB website. “Health Canada is looking into this,” said Thierry Belair, Petitpas Taylor’s press secretary. And it’s not just those photos of happy human beings that are drawing scrutiny. The Cannabis NB website also touts its cannabis products in upbeat ways that seem at odds with the federal law.

For instance, the act sweepingly stipulates that cannabis must not be presented in any way that “evokes a positive or negative emotion about or image of, a way of life such as one that includes glamour, recreation, excitement, vitality, risk or daring.” That language is so broad that Fraser says her private-sector clients in the burgeoning pot production and retail sectors are still “asking a lot of questions about the boundaries about what they are and aren’t allowed to do.”

Cannabis NB’s website includes what might seem in any other context like typical advertising copy. Under the heading, “What’s it all about?” the website offers this breezy sketch of occasions when weed might be a good fit: “Although many consume cannabis alone, more and more are getting together with friends for different occasions. It could be the weekly poker game, girls’ night out, or a concert with the whole group. It could even be video chatting with your friends from the comfort of your own home.”

Good times—poker, concerts, heading out on the town with the girls. It’s not hard to see how this list of possible pot-smoking occasions might run afoul of the federal law’s prohibition on any promotion that conjures images of “a way of life such as one that includes glamour, recreation, excitement, vitality, risk or daring.”  In fact, Fraser has been advising her cannabis industry clients to be cautious about exactly this sort of lifestyle linkage. “The best word I can use to describe to clients how I know if it is going to be offside or not is ‘aspirational’,” she says. “If it’s showing potential customers something they would want to be, it’s probably going to be offside.”

While Petitpas Taylor’s office would not answer specific questions about elements of the Cannabis NB website, her spokesman said provincial government agencies, just like private pot companies, are covered by the Cannabis Act’s restrictions on promotions. (Cannabis NB, which is owned by the New Brunswick Liquor Corporation, did not respond to emailed questions from Maclean’s in time for answers to be included in this story; we hope to update the story later.)

Arguably the part of the law most emphasized by the federal Liberals is its ban on any promotion presented in “a manner that there are reasonable grounds to believe could be appealing to young persons.” The images and descriptions on the Cannabis NB website might also raise questions about this restriction, although visitors to the website must click on a “Yes, I’m at least 19 years old” box to enter the site.

Fraser was sharply critical of Health Canada for not being precise enough over the past year in explaining how the cannabis laws will be applied. Information sessions for industry were, she says, “very frustrating exercises.” She added: “They were essentially regurgitations of exactly the text of the act, really, without any interpretative guidance whatsoever, certainly with no examples.”

However, she said the government has been clear in broad terms that the sort of aspirational, lifestyle-based marketing Canadians are accustomed to seeing for most consumer products won’t be allowed for pot. “Health Canada doesn’t want us to be portraying to the public, ‘If you consume cannabis, your life will be like this’,” she said. “That’s exactly what they don’t want us to be doing.”

UPDATE, Oct. 19, 2018: On the morning of Oct. 19, the third day of legal cannabis in Canada, Health Minister Petitpas Taylor’s office emailed a statement to Maclean’s about the Cannabis NB website. “The law clearly prohibits promotions that associate cannabis with a particular way of life such as glamour, recreation, excitement or vitality,” the minister’s office says. ” It also prohibits promotions for cannabis that use a picture or image of any person, whether real or fictional.‎”

That’s simply restating the obvious, of course—summarizing and paraphrasing the act. But the statement from Petitpas Taylor’s office goes on to confirm that the federal government has asked New Brunswick’s provincial liquor and cannabis corporation to make changes. “Health Canada officials have been in touch with New Brunswick officials. They have advised them that some of their promotional material is not in compliance with those rules,” the statement says, adding, “We expect all participants in this new market to follow the law and Health Canada will continue to monitor the market and enforce the rules on a case-by-case basis.”

Mark Barbour, a spokesman for Cannabis NB, confirmed in an email in the afternoon of Oct. 19 that changes are coming to the website. “The officials from Health Canada did not offer explicit direction as to what changes should be made but rather offered their broad perspective on the website,” Barbour said. “Based on this conversation and guidance, we will be looking at our website over the next few days, and will make a few adjustments to align the content with the intent of the legislation.”