Ottawa keeps talking about how to define systemic racism

Politics Insider for June 12: Justin Trudeau also defines 'Canadian exceptionalism,' it's unclear how many Black Canadians are appointed to federal gigs and oh god, that hair 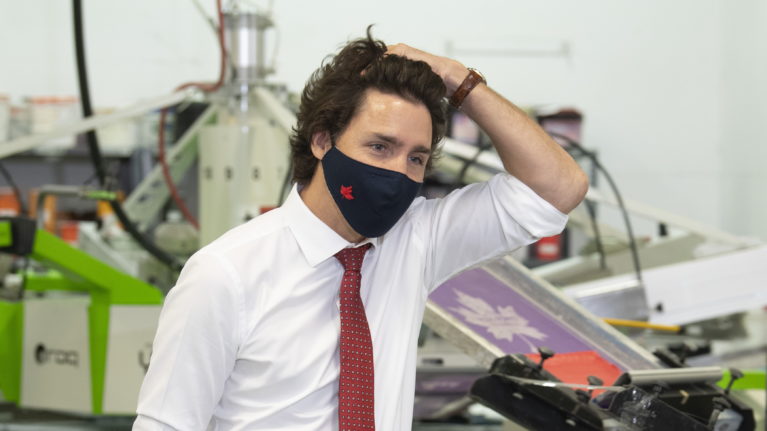 Prime Minister Justin Trudeau makes his way to the podium for a news conference after touring a business in Ottawa, Thursday June 11, 2020. (Adrian Wyld/CP)

Justin Trudeau toured Régimbal Awards & Promotions, a promotional company in an Ottawa business park perhaps best known for Dominion City Brewing (now on sale, a light beer called “People Need People”). Régimbal traces its history to a Sussex Drive barbershop in 1926, where a man named Horace worked in jewelry and watch repair. Now the company is the PM’s poster child for taking federal relief that allows them to retool. The company has started printing patterns on face masks, and has donated buttons to doctors and nurses that make mask-wearing more comfortable. It was all thanks to three federal programs: the emergency loan, wage subsidy and rent relief. That’s the sort of threefer that Department of Finance policy wonks dream about at night.

Trudeau took the opportunity to define systemic racism, a concept that still seems fuzzy to RCMP commissioner Brenda Lucki. The PM said the issue is so difficult to address because it requires us to “look at the very building blocks of our institutions and of our country”—which favour privileged people over all others. He also delivered another sound bite on “Canadian exceptionalism” that you can bet the PMO hoped would be the quote of the day. (Conservatives will more likely glom on to Trudeau’s accusation that the Official Opposition is the reason Canadians with disabilities won’t see emergency relief. The Tories say they only wanted to debate the bill according to normal House rules, not the special rules adopted in the pandemic’s early days.)

Marc Miller, the Indigenous services minister, openly questioned the RCMP’s two-year-old promise, delivered as part of Lucki’s apology on behalf of the Mounties at the MMIWG inquiry, to “examine the systemic causes of violence against Indigenous women and girls in Canada, and prevent and eliminate further violence.” Miller was candid about that commitment in light of recent reports of police mistreatment of Indigenous people. “Now, I look at the events of the last couple of weeks … and I ask myself, ‘Is that the best? Is that the absolute best?’ Because that was the promise that was made two years ago.”

Celina Caesar-Chavannes delivered the Liberals a blueprint, over at Policy Options, for fighting systemic racism in Canada. Among a buffet of options, Caesar-Chavannes recommended the feds appoint more Black Canadians to commissions, boards, Crown corporations, agencies and tribunals. Maclean’s wondered how many of those coveted positions were currently held by Black Canadians. The Privy Council Office’s latest data was published last July.

The PCO discloses the proportion of women, Indigenous people and visible minorities who’ve been appointed by the Liberals—but doesn’t collect more specific data than that. The Prime Minister’s office did provide Maclean’s with more current numbers. As of this month, governor-in-council appointees who identify as visible minorities comprised 8.2 per cent of all appointees—double the number when the Liberals took office in 2015. How many of those appointees are Black? That would take a case-by-case count.

London calling—or is it Beijing? The Globe and Mail landed the scoop, hiding in plain sight in public disclosures, that Canada’s foreign minister holds two mortgages in London, U.K., with the Bank of China. That lender has only a modest toe-hold in the British real estate market, but François-Philippe Champagne claims he only sought the Chinese state-run bank as a last resort. In the National Post, John Ivison offers simple advice: make the mortgages disappear.

The Green Party is pushing a new plan for the post-coronavirus world. And the Greens aren’t shy about going big. “We are at a hinge moment in history. They come along rarely. These moments in time—Kairos moments—change everything,” reads the intro. “This is an end to incrementalism. It is time to sweep away the remnants of an unjust, unsustainable world.” The party calls for a new social contract, a chief climate science officer whose advice is “not negotiable,” and an all-party climate cabinet. Greens would bring seniors’ care into the Canada Health Act, plant billions of trees and shorten work weeks.

“It’s moppish. It’s unruly. It’s mesmerizing.” Do you agree that Trudeau’s hair is any and/or all of those things? The New York Times whipped up a digital storm with that lede, and the claim that “commentary on Mr. Trudeau’s mane has become a national sport.” Here’s a hard truth. As little as a prime ministerial coiffure matters to the national interest, who among us hasn’t broken the awkward silence on a family Zoom call with this pate-icular topic? Also, the Times is way late to the party.