Paul Wells: What Canadians would like to see from their leaders is not bulls in china shops, but grown-ups. On the Food Guide fight, they fail. 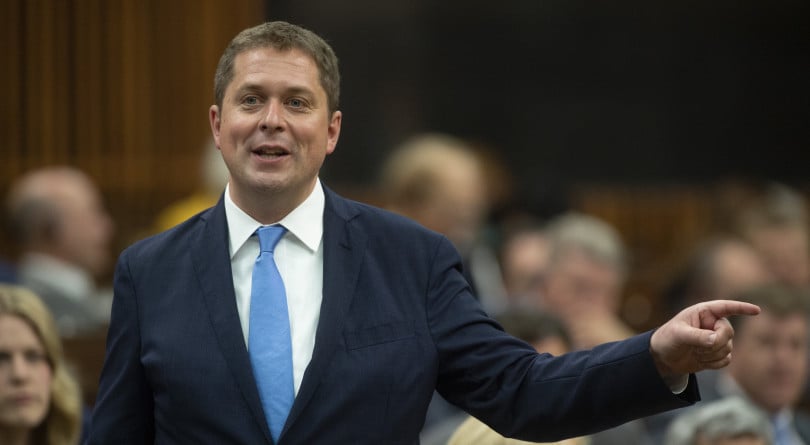 Scheer rises during Question Period in the House of Commons on June 19, 2019 (Adrian Wyld/CP)

It’s still only July, and we don’t vote until October, but is it too soon to start demanding that our political leaders stop taking us for perfect fools? Today’s Exhibit A is Andrew Scheer.

The Conservative leader announced to dairy farmers the other day that Canada’s Food Guide, as updated by the Trudeau Liberals, is mean to milk. This is because the guide urges Canadians to “make water your drink of choice.”

“Complete lack of consultation,” Scheer said. The food guide should “reflect what we know, what the science tells us.”

Could this be true? Seven seconds of Googling tells us that, indeed, it is not. Over here at foodguideconsultation.ca, we see the results of Health Canada’s consultations on the food guide. In Phase I of the consultation, nearly 20,000 people and organizations made submissions, including 265 organizations representing the food industry.

In Phase 2, more than 6,000 submissions were received, including 98 from the food and beverage industry. Most submissions agreed with promoting water consumption, noted that milk is a “healthy” alternative, and indeed emphasized that for the youngest children, there’s no need to discourage fatty homogenized milk.

Where was the Conservative Party during these consultations? Making fun of the Liberals for consulting so much.

The United Nations Food and Agriculture Organization says milk hasn’t been found to contribute to obesity. (I’m mostly dealing with Scheer at this point, but just you wait, I’m going to get to Liberal supporters who, now that the battle over Scheer’s comments has been joined, will spend the next week or two on Twitter treating milk as functionally equivalent to strychnine.)

But did Health Canada look at the science? It sure did. Here’s a summary of the evidence base for the new food guide. It’s robust. Canada’s dairy lobby, which unlike Scheer paid close attention to the food guide consultations, draws particular attention to this Health Canada survey, which found that a “majority of Canadians” have “low intakes” of “milk and alternatives.”

So. Was there a complete lack of consultation? No, there was a hell of a lot of consultation. Was the evidence ignored? It was really not ignored. Should the food guide have added that other healthy drink choices can include milk? Sure. You know where I got that language? From Canada’s food guide, which says, on the “Make water your drink of choice” page, that:

Healthy drink options other than water can include:

That’s right. Since the fridge magnets that are only the most visible part of Canada’s food guide aren’t the whole thing, what we are left with is a food guide that (a) was based on exhaustive consultation, including with the dairy industry; (b) paid close attention to the science, or as I like to call it, “what we actually know;” (c) calls unsweetened low-fat milk a healthy drink option.

Of course there is a lot going on here. Scheer owes his shot at the prime minister’s job to the tender attentions of the dairy lobby, which preferred his position on supply management to Maxime Bernier’s. He has been known to make public fun of this widely-known fact.

And while the dairy lobby took small hits in the NAFTA re-negotiation, of the sort absolutely everybody expected, it came out relatively unscathed. But NAFTA isn’t the dairy lobby’s biggest concern. Its biggest concern is the global collapse of the dairy industry, due largely to changing diets. So the dairy industry is panicky, just about all the time, and when a new food guide comes out that puts water on the front page and tucks milk as a “healthy drink option” inside, it rattles them.

But Scheer will soon ask us to make him Canada’s prime minister, which means he needs to think a little outside the audience immediately facing him. The question most Canadians have, when it comes to making Andrew Scheer the prime minister, is not whether he has pandered energetically enough to the dairy lobby. That box is already well ticked, thank you very much. The question most Canadians have, including a very large number of the Conservatives I chat with on a regular basis, is whether, when Andrew Scheer walks into a room, the number of thoughtful people in that room increases by one.

Every element of Scheer’s shtick in front of the dairy farmers was lifted from Doug Ford’s behaviour last year in regard to Ontario’s health curriculum, which included some language on sex education that a few members of Ford’s donor base found a little spicy. There was no consultation, Ford said. We’re in the hands of ideologues, he said. There had in fact been consultation, of course. The actual changes to printed curriculum, and all the more so to the in-classroom behaviour of Ontario’s teachers, has since been pretty limited.

It does no good for Scheer to have Ford put into witness protection for the duration of the federal campaign if he is going to spend the campaign acting as Ford’s stunt double. I submit to the Conservative leader that what Canadians would most like to see this autumn is not bulls in china shops, but grown-ups.

The same goes—in lesser measure on this issue, because his behaviour so far has been measurably less egregious—to Justin Trudeau. Ringing the alarm bells about a Conservative “war” on the food guide is a bad omen for the months ahead. It is altogether too Liberal to hide policy choices behind ex cathedra claims that all they do is “based on science” when, as we’ve seen, the science is so equivocal that Trudeau’s own food guide says nice things about milk. Could a sentence be added under “Make water your drink of choice” to the effect that “Unsweetened milk is a healthy choice too, and both are way better than the sugary soft drinks that are the real problem here”? It sure could. It probably will, right after the election, no matter which party wins it.

Could Canada’s federal health minister have skipped the chance to go straight into campaign mode? I mean, honestly, she probably couldn’t, because I put at zero the odds that she actually wrote the email that went out over her name in response to Scheer’s tirade. But a hypothetical Liberal health minister—say, in some awesome alternative universe, Jane Philpott—could have taken a few minutes to discuss reconciling the need for increased water consumption; the need to get consumption of sugary soft drinks way lower, especially in less affluent communities; and the legitimate concerns of Canada’s dairy industry and their generally commendable product.

But that wouldn’t fit in a tweet. It wouldn’t survive the seven-layer editing gantlet that every government communication must run, every one of them designed to strip nuance. Are you looking for an adult in the room this autumn? Me too. Unfortunately the people we’re relying on are looking for a fight instead.