Over to you Canada 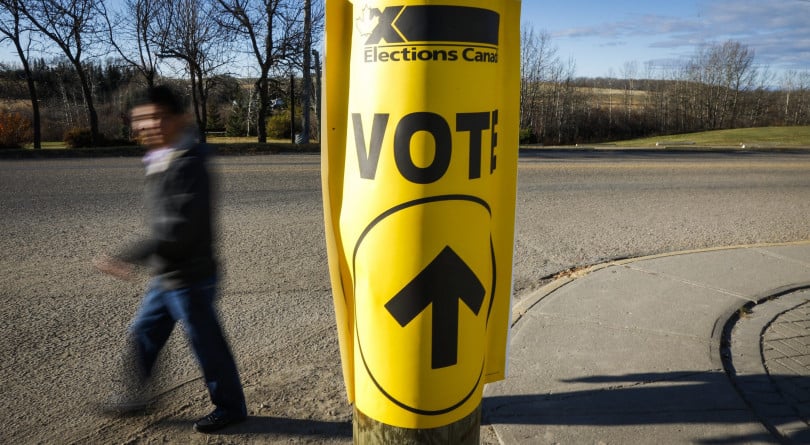 Canadians will be asked this fall to choose between moving forward with the Liberals or getting ahead with the Conservatives. A voter walks past a sign directing voters to a polling station for the Canadian federal election in Cremona, Alta., Monday, Oct. 19, 2015. (Jeff McIntosh/CP)

Election Day is finally here. After 40 days of mudslinging, nastiness and the occasional bout of policy discussion, Canadians will decide the next chapter of our democracy and tonight we will learn what shape the next government will take and who will lead it. (*Maybe.)

Certain uncertainty: By all indications, this will be the closest election in decades. The Liberals and Conservatives are locked in a dead heat as they have been since the start of the campaign, while the NDP resurgence appears to have peaked and the Bloc in Quebec remain a huge unknown factor. Throughout the campaign Philippe J. Fournier, the founder of poll aggregator 338Canada, has regularly shared his insights with Maclean’s readers. In his final pre-election dispatch Fournier analyzes the latest provincial polling trends, unpacks the indicators to watch as the results roll in — like if the Liberals win fewer than 60 seats in Ontario, we’re likely heading for a Conservative win — and the albeit unlikely paths to majority for either the Liberals or Conservatives:

I do not know who will win [this] election. The data that’s been made available suggest that we could have the first popular vote and seat split in 40 years (in 1979, Joe Clark won the most seats under the Progressive Conservative banner despite losing the popular vote to Pierre Trudeau’s Liberals by as much as four points nationally). This time, it appears more likely that the Liberals will win the most seats while the Conservatives earn the most votes.

The most likely scenario appears to be a Liberal-led minority, but the odds are so close and the number of toss up districts so high, that I am not ready to make that call. In each of the three provincial elections I have covered, a clear favourite had emerged by the time campaigns were coming to an end. In Ontario and Quebec in 2018, Ford’s PC and Legault’s CAQ were 9-to-1 favourites heading into election day. In Alberta last April, Jason Kenney’s UCP was a 25-to-1 favourite to win the election.

We have no such certainty as of tonight, although a minority scenario appears far more likely than any majority. Read more ››

Final dash: The leaders were leaving nothing to chance over the weekend. After a marathon journey on Saturday that took Justin Trudeau from Niagara Falls, Ont. to Calgary, he finished in B.C. urging voters to stick with the Liberals lest they open the door to a Conservative government. Andrew Scheer, also in B.C. Sunday, touted his campaign’s success with its message of “hope” and reminded voters that he isn’t just a smiling Stephen Harper. Meanwhile NDP leader Jagmeet Singh, also in B.C., appealed to young voters — “Hey I respect you, I value you and I want your input” — and those Liberal fence sitters who might get cold feet about switching their vote.

All three leaders found a common enemy in the final days of the campaign: Yves-François Blanchet. The resurgence of the Bloc Quebecois has come at the expense of all three main parties in the province. So when Blanchet said in a speech Saturday night that Quebeckers “will have to once again consider giving itself all the attributes of sovereignty,” Trudeau and Scheer pounced, warning of another sovereignty referendum, while Singh insisted the Bloc’s nationalist leanings would get in the way of fighting climate change.

Needed: One strategy to unite Alberta with the rest of Canada: If Trudeau does come out of tonight the winner, he’s got his work cut out for him to soothe the resentment and fear gripping Alberta, and yes that means building a pipeline, writes Jason Markusoff:

Expect more energy executives to speak openly about Alberta going it alone, confident the province’s wealth is better hoarded within its boundaries than shared with Canada. Before the vote, the CEO of the $1.5-billion Calgary firm Whitecap Resources urged workers to share a letter arguing that a separatist movement becomes real the day after a Liberal win. “More will want to leave if we continue to be exploited for our revenue and vilified for our industry,” says the letter, published by left-leaning website Press Progress.

Will a legitimate Parti-Quebecois-style movement spring up, somehow figuring out an Alberta military or how becoming a landlocked nation would solves its pipeline woes? No. But the murmurs and shouts will be the pointy end of a wider sense of anger, victimhood and existential angst—western alienation at an extent not seen since the 1980s—that Justin Trudeau and the Liberals will have to figure out how to address. Read more ››

Over to you: It’s tempting to be cynical after the campaign we’ve just had. But with scores of seats considered toss-ups, as the Maclean’s editorial from the latest print edition notes, everything might just come down to your vote.

Before you do cast your ballot, check out the Maclean’s federal election platform guide to see where the parties stand on all the big issues.