Politics Insider for May 14: Canada has a new face of accountability, the economy faces a long recovery and the border stays closed—for now 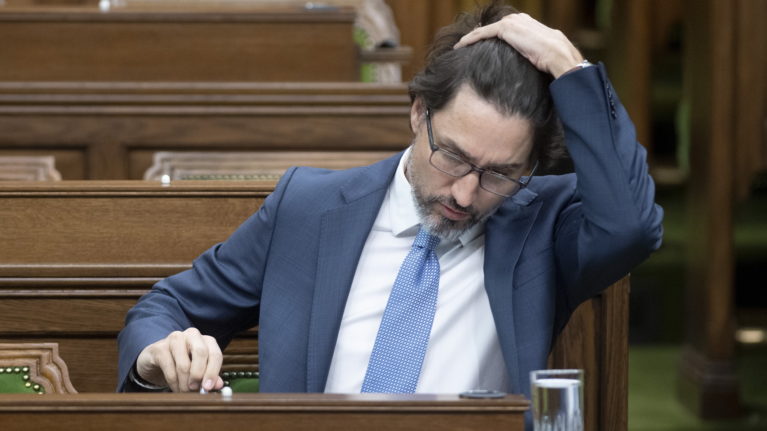 Prime Minister Justin Trudeau runs his hand through his hair as waits for a session of the Special Committee on the COVID-19 Pandemic to begin in the Chamber of the House of Commons in Ottawa, Wednesday, May 13, 2020. (Adrian Wyld/CP)

On what counts as a slow news day for the Prime Minister, Justin Trudeau revealed a few nuggets of information about the next phase of emergency relief. The PM said students can apply for their own monthly benefit starting tomorrow. He also noted that 120,000 companies who employ a combined two million Canadians have been approved for the federal wage subsidy, and more than 500,000 small businesses have secured emergency loans. Trudeau also reminded businesses that if they don’t qualify for any relief programs on the table, regional economic development agencies are splitting a $1 billion infusion to fill remaining gaps. (Read Trudeau’s full remarks.)

The new face of government accountability will soon be Karen Hogan, the government’s nominee to replace the late Michael Ferguson as auditor general of Canada. Hogan has worked in the AG’s office since 2006, and her biographical notes indicate she is fully bilingual.

Ferguson, a Harper-era appointee who regularly slammed governments of both political stripes, was initially criticized for lacking fluency in French. After his sudden death in February 2019, Trudeau left the position vacant for more than a year. A long unanimous consent motion passed by the House on April 20 finally forced the government to submit a nominee for parliamentary approval.

Don’t milk the debate: Yesterday, the Commons powered through yet another emergency spending bill—C-16, for those counting—that changed just one section of the Canadian Dairy Commission Act. The current text allows the federal finance minister to extend loans to the commission that can add up to $300 million at any given time. C-16, impressive in its brevity, hikes that number to $500 million. As has been their recent custom, MPs passed the bill within the day.

Stephen Maher has spent weeks digging into the aftermath of the horrific mass murder in Nova Scotia that ended with 22 lives lost. Now, Maher reports that new information is “raising serious questions about the way the RCMP handled the nightmarish onslaught.” Some law enforcement officials, he writes, are now wondering if at least some of the deaths could have been prevented. Maher asks six key unanswered questions about the killings.

How much can Canada’s economy really recover? Jason Kirby, writing in Maclean’s, says Canada is enduring an economic collapse that many economists warn will make the Great Recession seem tame by comparison.

As the weeks of coronavirus restrictions have dragged on, it has become ever more apparent that the hopes of a rapid return to the way things were before—the fabled V-shaped recovery—is out of the question. “It is wishful thinking to believe that things are going back to normal by the summer,” says Benjamin Tal, deputy chief economist with CIBC.

As Ottawa and the provinces respond to whatever crisis awaits, Kirby asked six economists how to save the economy. They call for a pan-national plan to reopen for business, a summer of infrastructure spending, a sales tax holiday for consumers and more (you’ll just have to click to satisfy your econo-fix).

The Globe and Mail reports the Canada-U.S. border closure to non-essential travel will be extended another month to June 21, but they found a senior anonymous source who predicts the “hard debate” will come before the next extension, when “there will likely be different views on when to begin to lift the restrictions” on both sides of the border.

Should sticking close to home be our new normal? Toronto’s former top city planner, Jennifer Keesmaat, writes in Maclean’s that for all the hardship imposed on urban Canadians amid the pandemic, this unexpected era of reduced commutes and smaller footprints could offer a better quality of life in the long run.

We can begin reducing our dependence on oil by moving towards decarbonized cities where walking and cycling are real transportation choices. We can begin the rebirth of public life in our cities as places for people, for nature and for our health.

Global News unleashed an Ipsos polling bonanza yesterday, reporting that most Canadians are fine delaying elections until the pandemic calms down, more and more of us are losing our resolve on strict physical distancing, and an overwhelming majority of Canadians distrust the Chinese government.

In his most recent Image of the Week, Michael Fraiman—a regular writer of this newsletter—sheds some light on Quebec’s unintentional experiment in child psychology as kids return to schools across the province.