Parliament is set to resume Dec. 5. Don't blink or you'll miss it.

Politics Insider for Nov. 13: Trudeau meets Scheer and Moe, a much-needed debate fix and digging into the election results 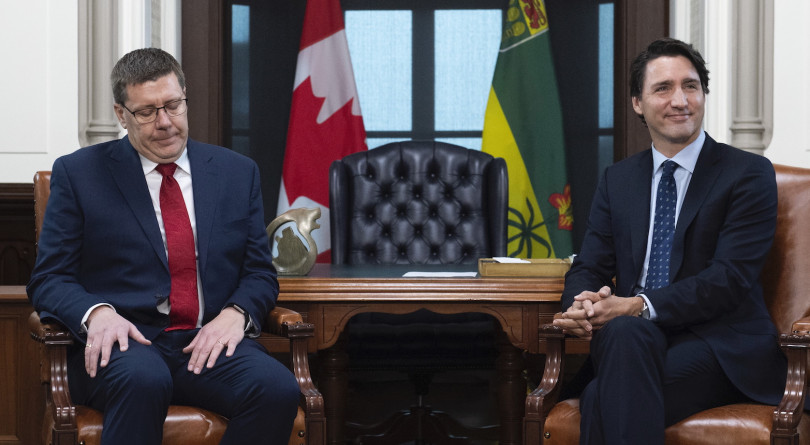 Prime Minister Justin Trudeau and Premier of Saskatchewan Scott Moe wait for media to leave the office after a photo op on Parliament Hill in Ottawa, on Tuesday, Nov. 12, 2019. THE CANADIAN PRESS/Justin Tang

Expectations for fireworks were admittedly low going into Justin Trudeau’s day of meetings with Andrew Scheer and Scott Moe. The Saskatchewan Premier’s demand for a one-year moratorium on carbon prices was a non-starter — “I came here today to hear about what he was going to do differently to support the industries and the people in the province. I heard more of the same.” Meanwhile Scheer noticeably dropped any mention of repealing the carbon tax — a cornerstone of his election platform — from his list of opposition priorities.

But Trudeau did finally announce when Parliament will return to work: Dec. 5. MPs will elect a Speaker that day, after which Trudeau’s throne speech — and his hold on government —  will be put to the test. MPs will have a maximum of six days to debate the speech before a confidence vote must be held, but the outcome is all but decided — no party is in a position to topple the government at this point. After that brief flash of activity, however, the House will fall silent again on Dec. 13 for the holidays.

Crowd control: It’s been said that one of the shrewdest strategies the Liberals deployed during the last election campaign was to make Trudeau as invisible as possible. To that end, here are a couple of telling numbers from the one and only English-language debate which the Prime Minister showed up for, where he shared the stage with five other leaders and five moderators.  A back-of-napkin tally from the transcript of the two-hour event shows that Trudeau uttered just under 3,100 words. To put that in context, the moderators and those asking pre-recorded questions bested Trudeau with a combined word count of roughly 3,450.

Since the goal of a debate should presumably be to give voters the maximum opportunity to see and hear the most likely contenders for the job face off against each other, David Johnston, the head of the federal debate commission, has some suggestions for next time: fewer leaders (in at least one debate) and fewer moderators.  “I think the fact that we had six leaders participating made for a pretty busy stage, but the mandate that the debates commission, which I chair, was given was to permit into the debate a leader of (any) party who had a legitimate chance of electing candidates,” he said while promoting his new book Trust.  “That meant candidates in two ridings or more, and that’s a fairly low bar.”

The new Liberal voter coalition looks a lot like the last one: In the last election only 62 ridings changed hands, and Liberals won many of the same voters as 2015. To get a clearer picture of what was happening below the surface Nick Taylor-Vaisey takes a deep dive into Statistics Canada census data to find out where the Conservatives, and other parties, fell short:

An avalanche of post-election analysis blames the Conservatives’ loss on Andrew Scheer’s social conservatism, the poor judgment of his senior staff, a lack of reliable voter data, an inadequate plan to fight climate change and an uninspiring set of platform promises. Tories have dispatched John Baird, a longtime Tory MP and cabinet minister, to assess the party’s lacklustre performance. As he goes about his work, detailed Statistics Canada riding profiles with detailed census data on income, employment, ethnicity and age help to piece together the voter coalition that turned away from Scheer and gave Trudeau a second term. Read more ››

Who wins Election 2019 under a ranked-ballot system: While we’re analyzing election data, 338Canada’s Philippe J. Fournier climbed back into his election simulator to determine how the parties would have performed under the type of electoral system the governing Liberals favoured back when electoral reform was still an unbroken promise. Spoiler alert: Unhappy Conservatives would have even more reason to be morose.

The current version of the Conservatives would lose the most under a ranked ballot system. According to this simulation, they would go from 121 seats in FPTP to an average of 107 seats.

This should not be surprising considering the CPC was the second choice of only 9 per cent of respondents (including nearly half of PPC voters). Several observers noted that should the CPC have won the most seats on election night, it would have been hard pressed to find partners to support their policies. (For instance, under a CPC minority scenario, which other party would have supported scrapping the carbon tax?) These numbers tell us that although the Conservatives did win the popular vote, the anti-Conservative vote was somewhat stronger than the anti-Liberal vote. Read more ››

The lies that bind: Elizabeth May, who stepped down as leader of the Green Party after the last election, used her appearance on TVO’s The Agenda to take a swipe at the NDP, alleging that what she called “dishonest” tactics were used against her and her party. While insisting the Greens did “very well” by winning three seats, she admitted the results didn’t live up to her expectations. “If anything I underestimated the extent of … well, I don’t want to go back over it because it’s a source of great pain for me that we were victims of dishonest campaigns. It was like a carpet-bombing of lies that went through the campaign and definitely deprived us of seats.” The party will chose a leader to replace her during its national convention next October, but don’t watch for May to pick her favourite: “There’ll be no endorsements from members of federal council, including me.”