'Each of us writes the story of Canada every day'

For the record: Our columnist on winning the Shaughnessy Cohen Prize 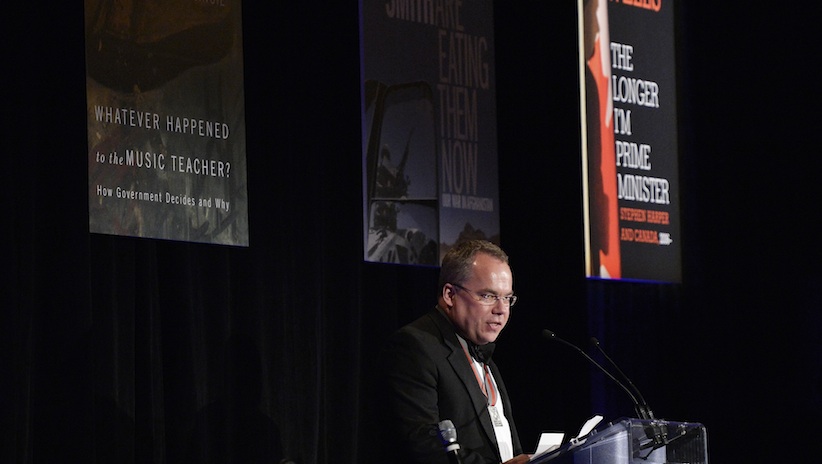 Paul Wells has won the Shaughnessy Cohen Prize for Political Writing for his book, The Longer I’m Prime Minister: Stephen Harper and Canada, 2006-. Here’s what he had to say as he accepted his prize — words he had prepared, “just in case.”

I want to say a few words about one word in the title of my book.

When you have two years to write a book and you’re a procrastinator, you can weigh every word on the cover. So I’m probably the only person who attaches any significance to the subtitle of my book, “Stephen Harper AND CANADA.” The choice was conscious. And note that I didn’t write “Stephen Harper’s Canada.” It isn’t his country — any more than it was Pierre Trudeau’s or King’s or Borden’s. It’s a dialogue. And because there have always been more of us than there are of them, it is — or should be — a chorus.

This morning Charles Montgomery and I were lucky enough to tour the Centre Block of Parliament. In the rare-book collection of the Library of Parliament we saw a handwritten table that accounted for populations, lands and goods in Quebec City, Trois-Rivières and Montreal. In careful cursive script across the top it reads: “Recensement générale du Canada en l’année 1695.”

There’s that word again. Canada. This is not a new country. It’s not a fragile country. It’s a lot closer to 400 years old than to 150. That General Census of Canada was taken 80 years after Samuel de Champlain canoed through Georgian Bay in 1615 and wrote in his journal, “As for me, I labour always to prepare a way for those willing to follow.”

We need, in other words, to be ourselves. Each of us. Confidently and without apology. This is what Stephen Harper has been doing all along, and years later he was worth writing a book about.

I worry, though, about too many people who seek to serve him. A few years ago the National Post interviewed young political staffers in Ottawa and asked them where they like to get a coffee. Without exception, every young Conservative staffer said, “Tim Horton’s.” I get the allusion, of course. This is a Tim Horton’s government, it cares about the little guy, yadda yadda. But you know, there are a lot of places to get coffee. You can make it at home. You can go to McDonald’s. You can brew up a pot in the office. You’re not actually required to lobotomize yourself as soon as you turn off the Queensway and head to the Hill for the first time. And again and again, this government has wound up in trouble when some staffer blindly followed the branding instead of using the brain he presumably believes God gave him.

And the funny thing is, if Stephen Harper was 25 and working on the Hill today, he sure as hell would not have cheerfully told the National Post he takes his coffee where the boss told him he should.

The question facing each of us is, Will I let someone else define me and reduce me — or will I define myself and live in full? The corollary for young political staffers on the Hill these days is: Will I serve Stephen Harper — or will I try to be like the young Stephen Harper? Proud. Skeptical. Sovereign.

All of this helps explain why I finally decided to write MY book about the Prime Minister. Of course I couldn’t write anybody else’s. My book would try to be calm as it described passionate debates. It would be critical without being dismissive, and it would side with the truth as I see it rather than either with the Prime Minister or against him. It would be funny at a moment when too many of us seem to have lost our sense of humour. I am grateful for the jury’s suggestion that I got some of it right.

Stephen Harper has been a formidable prime minister, personally generous to me even as he has been institutionally dismissive of my craft, and I am grateful that he has held still long enough for me to write about him twice. But the rest of us should neither submit to him nor let him define the contours of our lives. Stephen Harper’s is an inspiring and sometimes vexing story, but it is not the story of Canada. Each of us writes that story every day. Let’s remind ourselves that’s OK.

FILED UNDER: Paul Wells Politics and the Pen Stephen Harper