Pauline Marois among the people

Surely the Charest government loses votes every time any Quebecer tries to drive somewhere on the province’s highways. The Inklessmobile spent a half hour parked on the Autoroute des Cantons de l’Est, and I got to St. Jean sur Richelieu quite sure I’d missed Pauline Marois’s lighting visit to the town’s pretty farmer’s market. But I found a crowd of a few dozen people waiting by the side of the street. Maybe all was not lost. I buttonholed a guy wearing a PQ button on his shirt. He turned out to be Dave Turcotte, the PQ incumbent in the National Assembly. Marois’s bus had been stuck in traffic just like my car, he said.

I asked Turcotte how the campaign is going. “You know, this is my third campaign,” he said. “I’ve known defeat, narrow victory, and now it looks like another kind of victory.” Who’s his competition? “The CAQ,” François Legault’s new party. What’s happening to the Liberals? “Melting.”

Marois’s bus showed up and presently she climbed out of it, shoes matching dress, a smile that seemed quite genuine on her face. Like this: 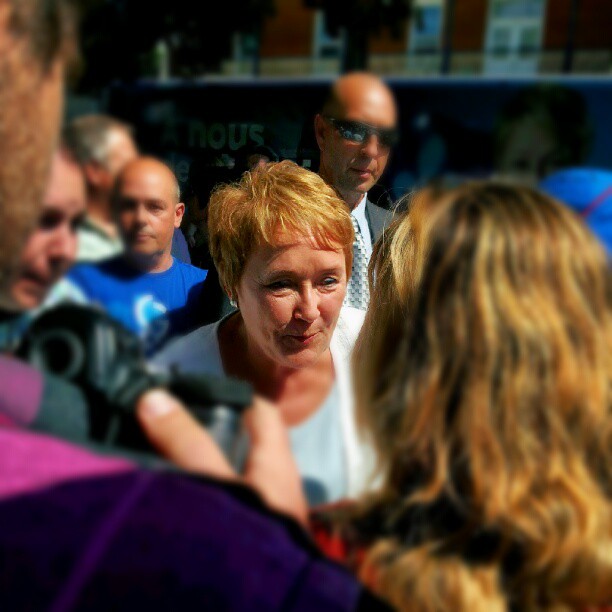 She had four such events on Saturday and will, one suspects, have more of the same on Sunday. I spent nine years covering Jean Chrétien and six covering Stephen Harper; I’m not used to a party leader shaking the hands of any but carefully selected partisans three days before an election. But Marois has little to fear: even though I spotted one CAQ lapel pin in the crowd, she is, my colleagues told me, greeted at least cordially and often with glee wherever she stops. “Is it okay for me to kiss you?” a gentleman of a certain age with a T-shirt that said FIER D’ETRE NORMAND asked her. She nodded; he planted a genteel kiss on each cheek.

My colleagues on the PQ bus told me the real fun of the day came earlier in Châteauguay, when Marois held a longish press conference featuring questions on all the fun topics.
That scrum followed yet another streeter that featured a rare awkward moment for the PQ leader. She passed a table where an English-language school board was handing out pamphlets for professional development. Midcareer job training sort of stuff.

“Mr. Legault should do this,” she said. Because François Legault will be out of a job after Tuesday, you see, ho ho, and he’ll need job training, hardee har.

“He can’t,” the guy from the school board replied. Whoopsie. Marois wants to extend Bill 101 restrictions on English-language schooling, which already apply in elementary and secondary schools, to CEGEPs (junior colleges) — and to professional training. So Legault, a francophone, would be barred from taking a professional training course in English. (The Gazette‘s account of the encounter is here.)

Not particularly fazed by the encounter, Marois stopped long enough to take questions from reporters. I offer my account of what followed with thanks to Le Devoir‘s Robert Dutrisac, who emailed me an audio recording of the news conference.

Marois began with an opening statement. “I address every man and woman in Quebec,” she said. “I think we should send a very clear message to the Liberals by sanctioning them severely. And we can only do that by voting massively for the Parti Québécois. I also invite you to seriously consider the risk posed by the CAQ. François Legault has told us he’ll plunge us back into an election in 6 months if there is a minority government. The only way to avoid that threat is to elect a majority PQ government.”

Marois continued with a new favourite campaign theme, a highly selective reading of an interview Legault gave The Gazette this week. “I remind you that Mr. Legault began the campaign calling himself an autonomist. He’s ending it more federalist than Mr. Charest. I said it yesterday to party workers in St Eustache: a vote for the CAQ is a gift to Stephen Harper. We’ve shown that our team is solid, experienced, ethical and honest. …Between the CAQ and the PQ, the choice is very clear. The CAQ is chaos and confrontation. It’s a program that’s built on wishful thinking. The PQ is a responsible change with concrete changes for Quebecers.”

Keen readers will note that Marois is framing Tuesday’s election as a choice between two parties, hers and Legault’s. Elsewhere this afternoon, Legault is delivering a speech in which he does not once mention Charest’s Liberals.

Question time. What was this business with the guy from the English school board? “They’re afraid, of course, that there may be a few fewer people attending their courses,” Marois said. “But as far as I’m concerned, we have to help the anglophone school boards or anglophone professional schools to better serve the anglophone community and we won’t let them down in that regard.” But having said that, she added: “We have made a choice: public money won’t be used to anglicize Quebecers.”

The next reporter’s question followed automatically. “I’m trying to follow your logic,” the guy from TVA said paraphrasing Marois back to her. “‘We won’t let you down,’ but ‘Public money won’t be used to help you?'”

“Once again, public money must not be used to anglicize Quebecers,” Marois said. “I’ve already been minister of education as you know. If there’s anyone who’s respected the anglophone community it was me. I gave them complete control of their institutions back, with the introduction of linguistic school boards. And that’s what I’ll do in the future: respect the rights of the anglo-Québécois minority.”

She was asked about the Council of the Federation, a fancy name for the annual premiers’ conferences, dreamed up by Charest soon after his 2003 election. She criticized it at the time. What will she do about it now?

“I’ve never believed in an empty-chair policy,” she said. “So wherever there is a forum where I can defend the point of view of Quebecers I’ll be there. I can tell you, however, that so far it’s not producing great results.”

She was asked whether sitting down with other premiers would undermine her claim to negotiate equal-to-equal with the feds. “One doesn’t rule out the other. We will negotiate directly with the federal government, with Mr. Harper. That goes without saying.”

The guy from La Presse asked what she makes of the weekend flurry of English-language editorials endorsing just about everyone except her. “A Marois government will always be respectful toward its neighbours, whether they’re federalist or have other points of view,” she said. “Of course. It goes without saying, as far as I’m concerned. But we won’t apologize for being what we are. And we will defend our interests and make Quebec progress.” Then she stuck in the shiv. “You’ll notice that these big newspapers are choosing Mr. Legault. He’s the one who scares them least when it comes to defending Quebec’s interests.”

Next question. When she says she’ll negotiate with Harper, what does she plan to negotiate? Her answer to that one was one of the most intriguing of the day.

“I believe that, from the moment Stephen Harper decided Quebecers form a nation — he even had a motion to that effect passed in the House of Commons — that must have consequences. Until now it hasn’t had any. So starting from there I’ll present the demands of Quebecers, whether it’s in language, culture, communications or the employment-insurance regime. So I will present these demands firmly, clearly. I think it’s my duty to do so, to respond to the needs of Quebecers.”

What about the Globe and Mail editorial positing a Liberal-CAQ coalition to stop her? “I will work with all the determination I can to obtain the support of Quebecers and form a majority government,” she said. “We see the support the Liberal Party and the CAQuistes are receiving — they’re both federalist parties and M. Legault has gone further than any federalist party would go, saying he’d go so far as to sign the constitution. So Quebecers can judge. They see what’s happening. The only party that can defend the interests of Quebec, that will stand up to Mr. Harper, is a majority Parti Québécois government.”

In response to yet another question she returned to the theme that Legault would be English Canada’s patsy. “I think this support for the CAQ from English Canada is not very surprising. Mr. Legault said he began as an autonomist, before that he was a sovereignist, a sovereignist in a hurry. Now he’s an unconditional federalist. He said it very clearly. You hear it in the sixth minute of his interview with The Gazette, that he’s ready to sign the constitution after he does a few things for Quebec. Well, this is the only political party in Quebec — Robert Bourassa never went that far, Jean Charest never did — the only one that’s gotten down on its knees to Ottawa before even being elected and clearly said it’ll sign the constitution that no other party has wanted to sign before now.”

In Quebec politics, all the French questions are asked first, then all the English questions. (It’s easier for TV if all the questions in one language are asked at the same time, and it was never really a toss-up which language would go first.) The first English-language question came from The Gazette‘s Kevin Dougherty, who began by contesting Marois’s claim that Legault would sign the constitution: “He said ‘I would not be there.’” There followed a little back-and-forth about what’s in the transcript. Then Dougherty asked why Marois persists in believing that adult education in English must “anglicize” its recipient.

She was, after all, standing with two PQ candidates who pursued graduate studies in English at the London School of Economics.

“I can think of two people who are standing beside you who don’t appear to have lost their French,” Dougherty said. “Now why is it a problem for children — children? Adults, 18-year-old Quebec adults — to go to an English CEGEP? Why is that a problem?”

“You have the right to contest that,” Marois said, “but you are a journalist and you’re supposed to be objective.”

“I am being objective,” Dougherty said, but “I think you’re exaggerating.”

“You know, that was exactly the same attitude in 1976,” Marois said, “when the PQ government of Mr. (René) Lévesque decided to adopt Law 101. That was terrible for our party but today we are very proud of this law. So now we have problems with the anglicization of Montreal and with a great part of the Montreal region. We have a responsibility to send a message to the new Quebecers: ‘Here we speak French. We will help you to learn French. We will respect the rights of the English community.’ And I was the first to do that when I was minister of education and I will continue. But I will not put public money to anglicize Quebecers.”

The rest of Marois’s day was a series of streeters in a series of towns as she headed toward the Eastern Townships. Her campaign will return to Montreal overnight. The vote is Tuesday.