Politics Insider for Nov. 3: The former Tory heavyweight returns to private life, Chrystia Freeland promotes a CERS'd rent-relief program and the race for the White House nears its crescendo 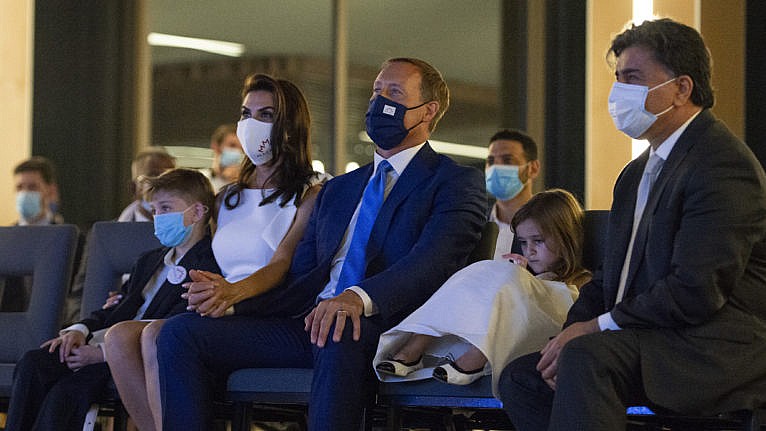 Peter MacKay, leadership candidate for the Conservative Party of Canada, watches a broadcast show that announced the party's new leader with his wife Nazanin Afshin-Jam MacKay, their children Kian, 7, and Valentia, 4, and father-in-law Afshin Afshin-Jam, in Ottawa on Sunday, Aug. 23, 2020. (Justin Tang/CP)

This is a newsletter about Canadian politics, but rest assured Maclean’s will provide full coverage of the U.S. presidential election—and won’t stop until there’s a winner, whether that’s in the early hours of tomorrow morning or, god forbid, the late hours of potential Supreme Court deliberations down the road. Watch all the live results when they start rolling in this evening. More on the race for the White House a bit later, but let’s come home to Ottawa for a second.

He’s not running: After giving it a good hard think after losing the Conservative leadership to Erin O’Toole in August, Peter MacKay has decided against another run for Parliament. “After spending almost 9 months as a leadership candidate in the middle of this pandemic, much of it away from my family and full time job, my focus must be to return to both,” MacKay said in a statement. He told O’Toole he’d be “doing everything [he] can” to defeat the Liberals. Well, everything except run against them. O’Toole, whose campaign once wanted the police to investigate MacKay’s camp, thanked his formal rival for his service.

Former finance minister Bill Morneau backed away from the next federal election, but his run for secretary-general of the Organization for Economic Cooperation and Development is in full swing. Morneau yesterday showed off endorsements from the business community and organized labour. Perrin Beatty, a Mulroney-era cabinet minister who heads the Canadian Chamber of Commerce, called Morneau an “effective leader.” Hassan Yussuff, the president of the Canadian Labour Congress, was “honoured and pleased” to lend his support. Morneau was listed fourth on a Bloomberg rundown of OECD hopefuls.

Morneau’s successor, Chrystia Freeland, tabled another pandemic support bill in the House of Commons. Bill C-9 pitches a revamped commercial rent-relief program, the Canada Emergency Rent Subsidy, that covers 65 per cent of expenses for most eligible small businesses—and 90 per cent for those hardest hit by lockdowns. Critics dismissed the last program, known as CECRA, as flawed because it leaned too much on landlords. The new program, which will make relief available directly to renters, is unfortunately CERS’d.

Zack Bell is the Progressive Conservative candidate who took his party over the top in P.E.I. Sixteen months after Premier Dennis King secured a minority government after perhaps the politest provincial campaign in years, Bell handily won a Charlottetown by-election last night that unlocked a new era of majority rule. Bell won seven of 10 polls and 49.1 per cent of the vote. The Greens topped the Liberals for second, while the NDP languished in a distant fourth.

The city of Ottawa might be turning a corner, at least temporarily, on the second wave of the pandemic. Ontario’s associate chief medical officer of health, Dr. Barbara Yaffe, pointed to a drop in cases in the nation’s capital. The COVID-19 wastewater surveillance program that has gained a following also appears to show a sharp reduction in “viral signal” in the city’s sewage. Meanwhile, Ottawa Public Health officials raised the alarm on an indoor sports practice that spawned 60 positive infections in the city—and counting.

Okay, back to the election results the whole world will be watching today.

A final 338Canada U.S. election projection: Maclean’s contributing editor Philippe J. Fournier answers the question everybody is asking: Where will the race be won or lost? “If Trump loses either Texas, Ohio or Florida, his chances of re-election will drop to near zero,” writes Fournier. “If he does win all three, then turn your attention to Pennsylvania, the most likely tipping point-state in the projections.” As he mulled over his last projection, our astrophysicist-turned-polling expert reflected on another job he once had—and what it said about hard data, gut instincts and sheer chutzpah.

During my university studies, I worked as a croupier in a casino to pay rent and tuition. Night in and night out, I saw people who just knew it right after it was too late. I witnessed the extremely irrational and very human behaviour of trying to see clear patterns out of pure randomness. Yes, hitting on 16 when the dealer shows a five in Blackjack is playing against the odds, and players who did just that would regularly infuriate people around the table. Most times, they busted and lost their money. But I clearly remember times when a player would then get a five to hit 21—and win a hand he would have lost otherwise. What would the player say then? “I just knew it!”, but he didn’t.

Maclean’s will have a full-court press tonight. Your newsletter correspondent will be calling every single county on the Canada-U.S. border when their votes are in, armed with a 50-column spreadsheet that’ll tell you everything you need to know about recent voter trends in the borderlands. We’ll also live-colour a map as states are called, which is far more relaxing than watching the same action on cable news. And we’ll bring you all the trusted analysis you expect from Maclean’s whenever there’s an election. Needless to say, we’re ready for an all-nighter.