William Pristanski has been a key MacKay backer and strategist. He was also one of the lobbyists seeking to help SNC-Lavalin avoid a criminal trial. 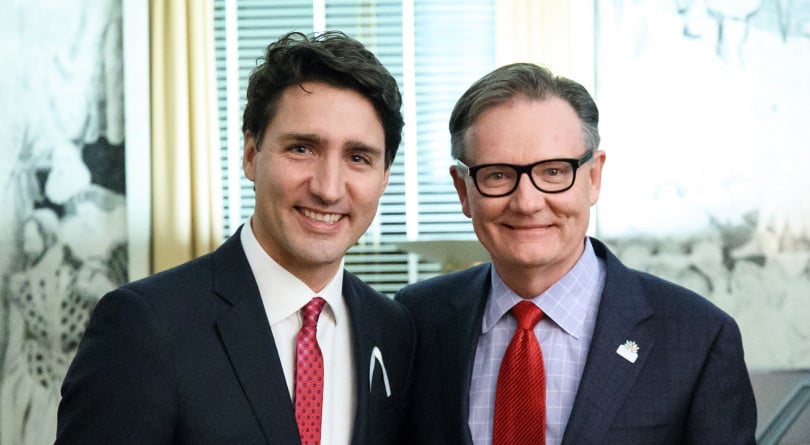 Trudeau poses with Pristanski at a ceremony at the French Embassy where former prime minister Brian Mulroney received the Legion of Honour on Dec. 6, 2016 (Adam Scotti/PMO)

The strategist who has been working for decades to make Peter MacKay the prime minister is one of the high-powered lobbyists who tried to convince the Trudeau government to help SNC-Lavalin avoid a criminal trial for bribing corrupt officials in Libya.

William Pristanski, a well-connected former senior aide to Brian Mulroney, is raising money and offering strategic advice on MacKay’s campaign to succeed Andrew Scheer as leader of the Conservative Party of Canada. It’s a relationship that is likely to come under the spotlight if MacKay wins the leadership race and takes over the party in June, as seems likely.

MacKay is said to be close to Pristanski, even closer than to Brampton Mayor Patrick Brown, who has put his impressive southern Ontario political organization behind MacKay’s campaign. It’s a relationship whose roots go back to the days when MacKay was a student at Acadia University and his father, Elmer, gave up his seat in the House of Commons to provide a byelection opportunity for Brian Mulroney, then the new leader of the Progressive Conservatives. Mulroney easily won the race, and in 1983, he became, briefly the MP for Central Nova, the riding that Elmer and Peter both represented in Ottawa. Pristanksi was then a junior aide to Mulroney in Ottawa.

After Mulroney beat John Turner and became prime minister, in 1984, Pristanksi served as his executive assistant, travelling the world at his side, staffing him while he met with Mikhail Gorbachev, Deng Xiaoping, Margaret Thatcher and other world leaders. He later served as chief of staff to several ministers in Mulroney’s cabinet, becoming increasingly powerful.

He left government in 1991 and founded his boutique lobby firm, Prospectus Associates, along with Robert Evershed, another Progressive Conservative staffer who has since become one of Ottawa’s most successful defence lobbyists, representing Lockheed Martin’s interests in the enormous F-35 procurement that MacKay spearheaded, for instance.

The firm’s small group of well-connected lobbyists look after the interests of some of the most desirable clients in the business—among them Walmart, Porsche and the NHL. Its web site boasts that Prospectus “prides itself on delivering high-end personalized service by experienced professionals.”

Pristanksi, who rubs elbows with Ottawa power brokers at the Rideau Club and Royal Ottawa Golf Club—is also a member of a more exclusive club: Tory hockey players. He has got to know several generations of Conservative MPs and staffers by renting ice in Ottawa for pickup hockey games, a group that included Brown and MacKay.

Pristanski and Hartley’s deep political connections and experience may have had something to do with the decision of SNC-Lavalin to hire the firm in 2017 when it was struggling to cope with a criminal case that threatened its global operations.

In 2015, the RCMP had charged the company with fraud and corruption for funnelling $48 million to members of officials in the government of Muammar Gaddafi. The company, a big political donor, mostly to the federal Liberals, fought the charges in court, and also began an intense lobbying push to change the legal environment in Canada.

In April 2017, Hartley registered to lobby on behalf of SNC-Lavalin with the federal lobbying commissioner, as required by law. A month later, Pristanski followed suit. Pristanski registered to push the government for “policy changes related to white collar crime,” specifically deferred prosecution agreements.

The two men were part of the successful lobbying blitz that SNC Lavalin undertook to convince the Trudeau government to write legislation that would create a path for companies to avoid criminal conviction for their crimes through deferred prosecution agreements, an alternative already in place in many other countries.

In 2017, Pristanski met with Catrina Tapley, deputy secretary in the Privy Council Office and in 2018 with David MacNaughton, then Canada’s ambassador to the United States.

He also registered on Oct. 17, 2018 to lobby Ontario Premier Doug Ford to “update his staff about the current status of a possible Remedial Agreement under the Deferred Prosecution Agreement framework that became law in Canada in mid-September 2018.”

On Oct. 29, he met with Ford along with SNC-Lavalin’s then-CEO Neil Bruce, Ford’s calendar shows, presumably to seek Ford’s support for the company’s efforts to avoid a criminal trial.

Hartley and Pristanski were part of a supremely well-connected group of insiders—including Kevin Lynch, former clerk of the privy council and Frank Iacobucci, former Supreme Court judge—who worked on behalf of the engineering giant, successfully convincing the government to quietly introduce changes to the criminal code that could have allowed SNC-Lavalin to avoid trial.

Although it was a bipartisan effort, Conservatives did not shrink from attacking the Trudeau government when the behind-the-scenes lobbying became a political liability.

Last year, Scheer called for Trudeau’s resignation after former attorney general Jody Wilson-Raybould testified that the prime minister and his aides pressured her to order prosecutors to offer SNC-Lavalin a deferred prosecution agreement. The revelation brought Trudeau’s government to the precipice of collapse, costing him two senior ministers and his right-hand man, Gerald Butts.

Wilson-Raybould refused to intervene in the case and in December the company pleaded guilty to fraud, accepting a $280-million fine.

During the 2019 election campaign, Scheer repeatedly took aim at the clubby quality of the lobbying process, casting Trudeau as a corrupt prime minister who was ready to look after the interests of his well-connected friends. Similar attacks may be harder for MacKay to make, given that one of the lobbyists on the file has been a good friend and ally for so long.

Pristanski was campaign chair for MacKay’s successful 2003 campaign for the leadership of the Progressive Conservative Party, helping broker the convention-floor deal with Red Tory activist David Orchard that put MacKay over the top.

Pristanski was with New Brunswick senator Noel Kinsella when Kinsella convinced Orchard to bring his delegates to MacKay in exchange for agreeing not to merge the party with the Canadian Alliance. According to Full Circle, Death and Resurrection in Canadian Conservative Politics, by Bob Plamondon, Pristanski talked through the deal with MacKay before he signed, and then filled in Mulroney on the details, winning his blessing for the arrangement.

Pristanski was also involved in the merger talks with the Canadian Alliance that began soon after the convention, which MacKay entered into in spite of his deal with Orchard.

According to the book, when negotiations threatened to sputter out, Pristanski sent the message to Stephen Harper through intermediaries that MacKay would not compromise on his bottom line, insisting on equality of ridings in leadership elections rather than the one-member one-vote system favoured by the Alliance. Harper eventually accepted MacKay’s terms and the parties were merged, which angered Orchard, who attacked MacKay for breaking their deal, calling the merged party “an abomination, conceived in deception, born in betrayal.”

Plamondon said Pristanski’s bona fides in the party are a result of his long relationship with Mulroney. “I think his credibility for the work that he has done was established from his time working for Brian Mulroney,” Plamondon said in an interview.

They appear to have remained close in the years that MacKay served as a minister in Harper’s government. They played hockey together and their paths crossed on files that Pristanski was promoting.

All the while, Pristanski appeared to be keeping the embers of MacKay’s leadership ambition glowing. When MacKay announced in 2016 that he was going to stay out of the race that Andrew Scheer eventually won, Pristanksi sent the news release.

Sources say Pristanksi is playing an active role in MacKay’s 2020 campaign, although he is not managing it or chairing it. “Mr. Pristanski has no official role in the campaign other than volunteering along with over 1,500 volunteers across Canada,” said Julie Vaux, who recently became director of communications to the campaign.

Pristanski did not reply to requests for comment about his role or relationship with MacKay.

Pristanski may have no formal role, but Conservative insiders believe he is at the heart of the campaign, consulting closely with MacKay about key staffing and organizational decisions.

Pristanski’s role in MacKay’s campaign “raises questions about MacKay’s judgment in inviting someone to work on his campaign who has lobbied for a company that has been convicted of bribery,” says Duff Conacher, co-ordinator of Democracy Watch, an organization that pushes for ethics in government. Conacher pointed out that Pristanski’s role on the campaign would prevent him from lobbying MacKay if MacKay becomes an MP again, and may even make it out of bounds to lobby his office.

The rules around political organizers have since been tightened up, and in the future, Pristanski may not be able to conduct meetings with MacKay on behalf of clients seeking to do business with the government.

Vaux said MacKay is ready to follow the rules. “A MacKay government will abide by all restrictions governing lobbying activities as he did during his time as a minister in the previous government. There will be no exceptions.”