His romantic escapades captured the national imagination—yet his time in office was shadowed by a larger 'women problem', writes Anne Kingston 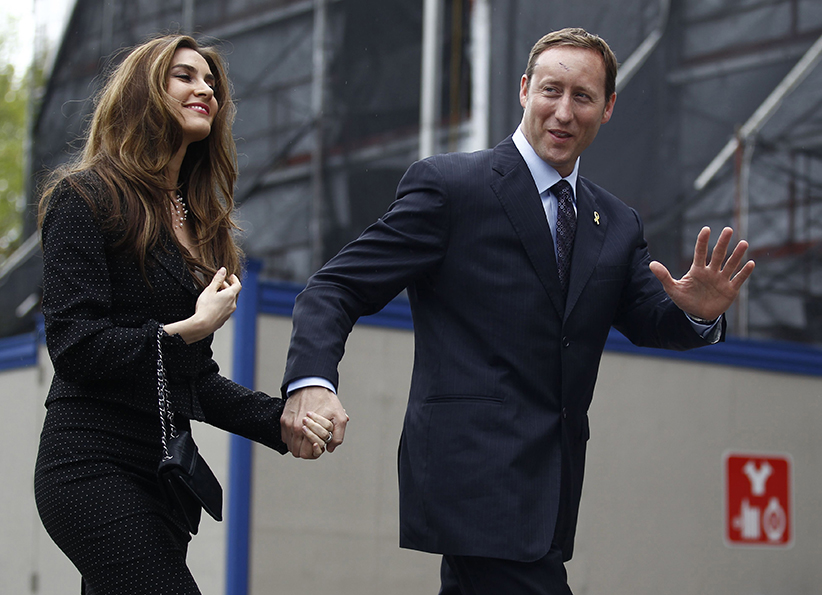 With Peter MacKay’s sudden exit, Canadians have lost far more than a cabinet minister. We have lost our pretend George Clooney. Not since Pierre Trudeau, another former justice minister, has a parliamentarian’s romantic escapades so captured the national imagination. This is the man named “sexiest MP on the Hill”—Canada’s earnest answer to People’s “sexiest man alive” (which Clooney captured thrice)—a record 10 times. His romantic history is etched in Hansard, most sensationally on that May 2005 day when Belinda Stronach, a fellow Conservative with whom he’d shared a high-profile, partisan love affair, broke up with him publicly when she defected to the Liberals.  A shattered MacKay met with reporters camped out at his family home in Pictou County, N.S., his dog at his side, to share his sorrow: “My heart’s a little banged up,” he revealed.

It would mend. The next year media was busy chasing rumours of a dalliance— a “supposed flirtation,” according to the New York Times—with then U.S. secretary of State Condoleezza Rice, who  would devote a page of her memoir to her good “friend.”  MacKay shed his perennial eligible bachelor status by marrying a glamorous human-rights activist, as Clooney did, with both weddings getting celebrity coverage. Photos of MacKay’s 2012 nuptials in Mexico to Nazanin Afshin-Jam were sold to and plastered in the glossy pages of Hello!, with proceeds going to charity. The following year the couple graced the celebrity tabloid’s cover again, showing off their new son, beside display copy exuding family values, quoting MacKay as saying: “Nazanin is a natural mother, so nurturing and full of joy. I’m so fortunate.”

Yet for all of MacKay’s well-documented success with the ladies, he has long been shadowed by a larger “women problem”—with his statements about sexualized violence and female equality, both in Parliament and off the cuff, earning him the reputation as a frat-boy fossil.

In 2006 he was accused of referring to Stronach as “dog” in the House of Commons, allegations he denied (Hansard has no reference to it). Last year he was at the centre of a series of gaffes after it was reported he responded to questions about the lack of women and visible minorities on federally appointed court benches at a closed session meeting with the Ontario Bar Association. Those present claimed the Justice minister stated women were choosing motherhood over applying to  the country’s top courts and that children need their mothers more than their fathers. MacKay countered he was misrepresented and in fact was prodding the group to do more to promote women and to encourage them to apply to become judges. His case wasn’t helped when news broke that the Justice Department was spending its time sending staff Mother’s Day and Father’s Day memos that bristled with retrograde gender-typecasting. The Mother’s Day email saluted moms for juggling two full-time jobs—home and work; the Father’s Day message, which made no mention of any household duties, praised fathers for “shaping the minds and futures of the next generation of leaders.”

Afshin-Jam MacKay gave the country a glimpse into family dynamics when she fired off a letter to the Globe and Mail defending her husband as an enlightened guy.  MacKay had been misrepresented in the media, which has a “24-hour news cycle, National Enquirer–TMZ mentality,” she wrote, claiming  organizers of the meeting refused her husband’s request to release the audio recording of his comments to lay the matter to rest. She also let it be known most of the senior officials in her husband’s office are women and they approved the messages written by female staffers.

MacKay proved himself to be tone deaf again shortly before the anniversary of the 1989 murder of 14 female engineering students at École Polytechnique, when he said “we may never understand … why these women were singled out for this horrific act of violence”  in the House of Commons.  It gave NDP Leader Thomas Mulcair opportunity to leap up with the obvious response: “Because they were women.”

Yet those who know MacKay say he’s more attuned to issues of sexual violence than his public record, or his participation in a government that made devastating budget cuts to women’s and sexual assault resource centres, would indicate. The former Crown attorney cut his prosecutorial teeth in New Glasgow, N.S., in the 1990s, successfully trying several sexual assault cases involving priests. As a politician, his focus has been almost exclusively focused on issues involving sexual violence against children—he advocated for the extradition of accused child-sex offender Ernest Fenwick MacIntosh from India, and has proposed various legislation aimed at protecting children, introducing Bill C-26, the “Tougher Penalties for Child Predators Act,” last year.

MacKay is also a familiar face when rare announcements of federal funding for organizations or programs combatting violence against women are made. In March 2013, he helped launch “Bringing In The Bystander,” a violence-intervention program at St. Francis Xavier University.

Still, there’s some irony in the fact his constituency office on Antigonish’s Main Street sits on top of Antigonish Women’s Resource Centre. Lucille Harper, the centre’s director since 1988, has known MacKay for years. “To be fair to Peter, violence against women is an issue he is concerned about,” she told Maclean’s in an interview at the centre last January. “I would say that comes from different places: as a former Crown prosecutor; his sister worked for a women’s shelter in New Glasgow; his mother was an activist in the peace movement. It’s not as if he hasn’t had conversations in his household that would provide him with core analysis.”

How he acts those things out, however, is quite different, Harper says: “He’s member of the Conservative government and has political aspirations.” As a result, he often can appear oblivious: “He is deliberately ignorant,” she says. “He refuses to know.”

Under his watch, changes to the status of women have been made. In a little-heralded move, misogyny is now included as hate speech under the new Bill C-13, “Protecting Canadians from Online Crime Act.” Far more contentious is Bill C-36, the new prostitution law, which been criticized for putting sex workers under greater risk because prospective clients will face arrest, making transitions more fraught with danger. MacKay counters that the bill gives sex workers the ability to create better working conditions and immunity from prosecution if they seek help from police. He leaves office just as a $20-million fund intended to serve as an “exit strategy” to help people leave the sex trade is being implemented. Already over-subscribed, the fund has come under fire for being too little money to make true change.

With MacKay’s abrupt resignation, it’s not clear whether or not the MacKay-Clooney comparisons are completely over. There are some who see Clooney’s new marital status as foreshadowing a possible run for political office; today MacKay said he was leaving politics for “purely personal reasons” to spend more time with his expanding family—with his second child expected in the fall. So it’s possible that Canada has not lost its pretend George Clooney quite yet.