The new Liberal MP adjusts to life in Ottawa, complete with heckling in the House and on Twitter 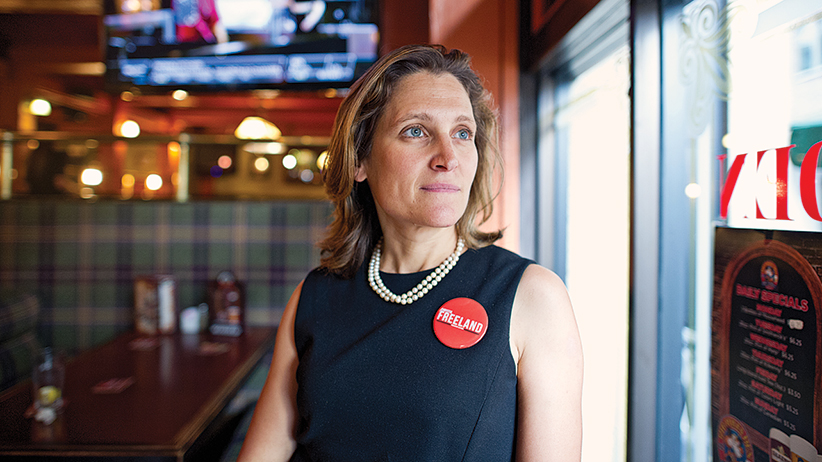 It was the first time she’d really been heckled in the House, and Chrystia Freeland, elected as the Liberal MP for Toronto Centre only a few months earlier, was not yet used to it. She tried to talk over the noise—her voice going up an octave or two—but the heckling only increased and the Speaker was compelled to intervene. She sat down then, and again a few seconds later, and only barely got her question in. In the midst of it all, a male journalist tweeted that she should use her “big girl” voice.

She learned, she says now, a month later, that sexism was something she’d have to take on. And she maintains a certain basic objection to what happened in the House. “I don’t think,” she says, “that we should accept for debate in the highest forum of our federal democracy to be conducted in a way that would not be acceptable in my son’s JK classroom.” (Granted, she is still a politician—the heckling from the Conservatives and the tweet from the journalist were subsequently used as part of a fundraising appeal signed by Freeland and sent out via email to Liberal supporters. “Don’t let the Conservatives shout us down,” she declared.)

Two weeks later, the Conservatives turned words of hers into an attack ad, using a comment she’d made as a candidate during a Liberal forum alongside Justin Trudeau—“It is increasingly the case that your job prospects are correlated not with how hard you work, not with how well you do at school, but with the job that your father had, and that’s not Canada”—to mock her party leader. But she says she doesn’t take from that that she should be more careful with her words. She says she was drawn to leave journalism and run for the Liberals because of Trudeau’s approach to politics, “which is about turning down the partisan temperature. Focusing more on people and the issues.” But she says that we risk turning our politicians into “automatons, wedded to pre-digested talking points” and that Canadians are “ready to have a more authentic discussion.”

Freeland has lately come to the fore on the matter of Ukraine. Her late mother, Halyna Chomiak Freeland, a lawyer and activist in Alberta (and NDP candidate in 1988) was of Ukrainian descent and, after moving to Ukraine in 1992 to pursue her graduate studies, Chomiak Freeland became involved in the drafting of the newly independent country’s constitution. Freeland, who previously worked in Ukraine and speaks fluent Ukrainian, addressed Parliament during a take-note debate on the crisis last month and went there last week, observing the situation, meeting with officials and sleeping on her uncle’s couch.

In an essay for Politico magazine earlier this year, Freeland warned against viewing politics with only snark. Only just off the plane from Kyiv, she is presented with the idea that even her appeal to authenticity is itself a partisan act and she tries to warn against total cynicism. “I was really inspired by being in Ukraine. And the example of people who were willing to die to live in a democratic-rule-of-law state. It reminded me of how precious that is. Part of what the Maidan revolution was about was actually changing the relationship between people and their government, making government more responsible to people,” she says, noting the new government’s moves to reduce internal costs. “We want this authenticity, this transparency from our politicians. I do think it’s a mistake for our politicians and also journalists to have too unrelentingly cynical a tone. Of course, there is an aspect to it. But this is also about bigger issues.”