Politics Insider for Nov. 17: The House unanimously requests a Biden-Harris visit north of the border, Bill Morneau lands a Yale gig and always watch out for the virtual hot mic 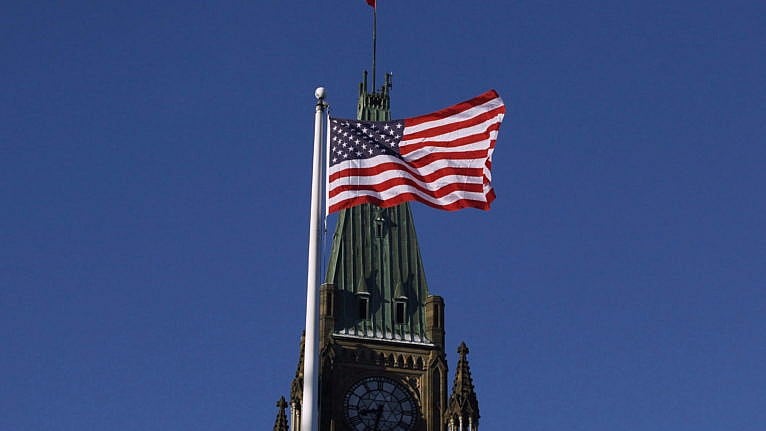 The American flag flies in front of the Peace Tower on Parliament Hill before the arrival of US Vice President Joe Biden in Ottawa on Friday, Dec. 9, 2016. (Patrick Doyle/CP)

Canada’s elected officials are not hiding their eagerness to have President-elect Joe Biden come north of the border. The House of Commons unanimously passed a motion to congratulate Biden and his running mate, Kamala Harris. They invited both to visit Parliament. And they invited Biden to address Parliament. The formalized longing for a presidential address might be an effort to simply out-hustle the other front-runners for First Foreign Visit in Mexico City. Back in 2001, George W. Bush famously “snubbed” Canada by heading to Mexico first. Barack Obama picked Ottawa (where cookies still remember).

Bill Morneau has a new gig. No, not the fancy Paris posting as secretary-general of the Organization for Economic Cooperation and Development. Yale University appointed Morneau as a senior fellow at its Jackson Institute. The former federal FinMin will teach “a graduate course on global economic policymaking during the Spring 2021 semester.” Say what you will about his untimely—or timely?—exit from Justin Trudeau’s cabinet, but Prof. Morneau knows more than anyone else in Canada about the possibilities and pratfalls of pandemic policy. Fingers crossed he shreds his old talking points.

Hot mic alert: This young Parliament has a new contender for most cringeworthy moment. During a vote in the Commons, Speaker Anthony Rota called on indie MP Jody Wilson-Raybould. But Maryam Monsef, the gender equality minister, hadn’t muted herself. And she was caught saying the following: “The question they’re going to ask me…How much do I make now? Like 250?” Only then was she muted. For the record, Monsef’s salary is now $269,800—along with a $2,000 car allowance. StatsCan pegged the median after-tax income of Canadian families in 2018 at $61,400.

The Commons smacked down an NDP motion that supported a wealth tax—specifically, a one per cent levy on income earned over $20 million. The New Democrats only found dance partners in the Green Party, and 292 votes against.

It’s unclear exactly how big a role Canada’s military will play in vaccine distribution, but the brass told a parliamentary committee yesterday that the Armed Forces are helping to develop a logistics support plan. Military planners are reportedly already embedded at the Public Health Agency of Canada.

Clickbait of the day: In an interview with the National Observer, new Green leader Annamie Paul made the credible claim that Donald Trump was a better slayer of carbon emissions than Trudeau’s Liberals. “Canadians don’t like to hear it, and I don’t like to say it, but even under Donald Trump, the Americans did a better job at tackling the climate emergency over his four years than Canada did,” she said. Coincidentally, the day after the presidential election, Paul spoke to Maclean’s senior writer Paul Wells about her plans for the federal Greens. Watch that conversation here.

The horse race: Abacus Data has the Liberals up eight points over the Tories, and the firm’s latest poll says Trudeau’s team leads everywhere but the Prairies. The biggest issues on voters’ minds are finding a way to cope with COVID-19 and saving the country’s economy. A little less than one-quarter of Canadians cited climate change as a top issue.

This might be the mother of all federal consultations. Justice Minister David Lametti has asked the Canadian people to share their thoughts on the Privacy Act. Much in the world has changed since the mid-1980s, when the law on the books came into force. Back then, Al Gore hadn’t invented the internet and grown adults used to store data on floppy disks without even giggling about it. As always, the feds offer reams of background reading.

The wrath of the watchdog: Two reports drop today that might knock politicians off their talking points and force public servants to endure some anxiety. The information commissioner will table a report on her “investigation into systemic issues affecting the processing of access to information requests” sent to the Royal Canadian Mounted Police. And the parliamentary budget officer turns his eyes to the high seas, where he’s tallying the costs of Canada’s expensive program to build new replenishment ships for the Navy—and its interim replacements refurbished by a Quebec shipyard.