Premiers in P.E.I.: Let the eastern bastards shine in the sun

Paul Wells in Charlottetown, where all eyes are on Wynne and Couillard 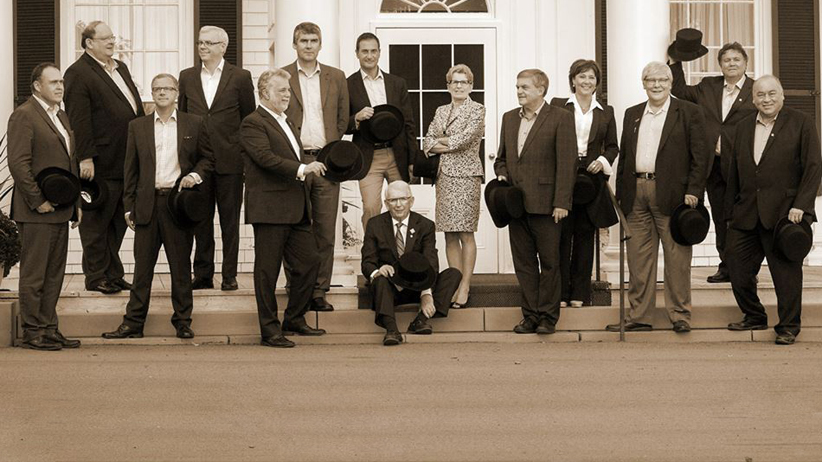 Greetings from Charlottetown, where the premiers posed yesterday for a group photo in postures that mimicked the Fathers of Confederation. Andrew Coyne is not pleased. Whatever you do, don’t tell Andrew about your cousin who dressed as Abe Lincoln for Halloween without freeing a single slave.

I haven’t been to one of these annual meetings in a good long time. Probably more than a decade. In those days the dynamic was as fixed as ritual: The Chrétien Liberals had cut transfers to the provinces for health. The provinces wanted the money back and more. They would meet annually and say so. It was … elegant. The stakes were high, the demands were simple, the mood was tense — Glen Clark could not believe how mean Chrétien was being! — the meetings were brief and the nights were long. At one reception in Quebec City, or maybe Winnipeg, Roy Romanow poured himself a Calvados while Lucien Bouchard asked a table of pols, bureaucrats and scribes whether Paul Martin could be pressed into service to push Chrétien out of office. The answer, as we all learned later, was “Eventually.”

These days the demands are more diffuse, and the absolute guarantee that this crew will not be meeting the Prime Minister of Canada until at least October of 2015 takes much of the fight out of them. There is less drama, and combined with shrinking newsroom budgets, there are fewer journalists on hand. But still the premiers meet. They have fewer demands these days, and more requests or offers or proposals or initiatives, but the net effect is similar: the sum of their desiderata exceeds the available federal treasury by a factor of two or three. It’s still summer, after all. They can return to responsible budgeting next week.

If there’s a big change this year, it’s not so much in the subjects being treated — energy, infrastructure, health care, internal trade — as in the distribution of influence around the table. Last year the two biggest provinces by population — still Ontario and Quebec, until further notice — were led by premiers in limbo. Pauline Marois led a minority PQ government in Quebec. Kathleen Wynne led a minority Liberal government in Ontario. Wynne’s days in office were surely numbered, and while Marois seemed headed for re-election; none of her colleagues was happy about that.

That’s changed. In April Quebecers tossed the PQ out with real enthusiasm and returned a majority for Philippe Couillard’s Liberals. In June Ontarians surprised, perhaps, even themselves by offering a similarly strong majority to Wynne’s Liberals. Now two premiers with comparable political philosophies and, their entourages report, compatible styles have four years to plan and execute — together.

It changes things around the table. Quebec has returned as a full participant in a health care innovation working group the premiers are running, after 18 months of PQ pouting. Marois wasn’t just a Péquiste, she knew less about Canada than any of her predecessors going back to René Lévesque, and her wary attitude at these meetings was palpable. Couillard isn’t just a federalist, he comports himself with less constitutional angst than any of his predecessors going back to, I don’t know, whoever the guy before Jean Lesage was. On Thursday he began the proceedings by reminding his colleagues that Quebec still hasn’t “signed the Constitution of 1982” (fun trivia: No provincial government ever signed that document), but that was a compulsory figure and quickly forgotten.

What will come out at the end of this conference is strongly influenced by the preoccupations of this twin-seat Laurentian Consensus: a pressing need for infrastructure funding and the strong belief that health care funding should be increased to account for aging populations. Both Couillard and Wynne have important resource-development projects in the northern reaches of their provinces. That means a lot of road work. Couillard promised to accelerate infrastructure spending; so far he can’t afford to fulfill that promise.

What’s perhaps most important in giving Couillard and Wynne political clout is the fact that some large number of their two provinces’ nearly 200 federal seats are up for grabs in the next election. Thirteen months from a federal election, that consideration goes to the top of a long list of reasons their colleagues have been leaning forward this week when either of them talks.