Q&A: Hunter Tootoo on returning to the Hill after rehab

After two months away, Hunter Tootoo opens up to Maclean’s about battling addiction and returning to Parliament Hill as an Independent MP 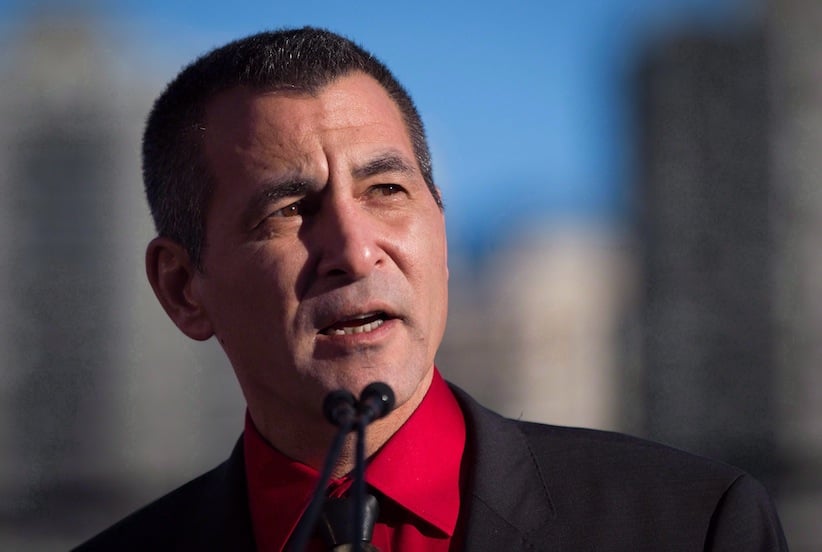 Minister of Fisheries, Oceans and the Canadian Coast Guard, Hunter Tootoo, announces the federal government’s commitment to reopening the Kitsilano Coast Guard facility, in Vancouver, B.C., on December 16, 2015. Hunter Tootoo has been working through “deeply personal and private issues,” the ex-Liberal said Wednesday as he resumed his MP duties following two months off to seek treatment for alcohol addiction. Tootoo, who represents the northern riding of Nunavut, held a news conference at his office in Iqaluit, his first appearance in the public eye since abruptly leaving cabinet and caucus at the end of May. THE CANADIAN PRESS/Darryl Dyck

Hunter Tootoo had a rough start to his life. Immediately after birth, he was airlifted from his home of Rankin Inlet and spent the first three months of his life in an incubator, the Nunavut MP told the Canadian Press last year. And this spring, he faced another hurdle: At the end of May, the 52-year-old abruptly resigned from his post as fisheries minister and from his seat in the Liberal caucus to seek treatment for alcohol addiction. At the time, Prime Minister Trudeau had little to say on Tootoo’s resignation, other than the choice was Tootoo’s own and that his former MP was seeking treatment for “addiction issues.” In an email, Cameron Ahmad, a press secretary for Trudeau, told Maclean’s the Prime Minister’s Office wished Tootoo well, and that “his status with regard to the Liberal caucus remains unchanged.”

MORE: Hunter Tootoo to Nunavut: ‘I remain just as committed to my work’

On Wednesday, Tootoo hosted an open house in Iqaluit for his constituents. He spoke to Maclean’s about his addiction and how he’s preparing for his return to Parliament.

Q: Two months ago, when you decided to resign, what was the tipping point for you to make that decision?

A: This has been an extremely difficult journey for me. There’s been some deeply personal and private issues that have haunted me and unfortunately alcohol is often a coping mechanism for trauma. I’ve personally been affected by those impacts and I just thought I was going in a direction I didn’t want to go in, and recognized that I had a problem, and that I needed to seek help to deal with it.

Q: How has your time away equipped you for your return?

A: My treatment I found very, very, very good. It’s been a process, like I said, that has been personally very difficult for me. I’ve been able to understand and gain the tools through treatment to be able to cope and deal with stuff as I move forward. I plan on continuing my recovery by attending AA meetings as time goes forward.

Q: How were you received by your constituents this morning upon your return?

A: I got in yesterday evening, and the reception I’ve received from my constituents is, you know, tremendous support, people saying they’re very proud of me, and they’re happy that I’m back. I’m back now, I’m much stronger, I’m more focused and healthy and ready to move forward.

Q: What would you say to those who might consider you a role model? Or to other people who have experienced trauma and have turned to alcohol as a coping mechanism?

A: One thing I realized and I learned after that was very beneficial for me, was you’re not alone. There are a lot of people out there in recovery and we’re all in this together and everyone’s willing to help support each other as we continue on with our recovery.

Q: Is there anyone you’ve relied on throughout this journey?

A: I think I’ve been very blessed that my family has been very supportive, my friends. I’ve received support from colleagues in the House of Commons, from Aboriginal leaders, from Canadians from coast to coast to coast. And that’s been very beneficial for me in my recovery.

Q: A few months before you resigned, your fellow MP Seamus O’Regan who left as well to seek addiction treatment. But he remained part of the Liberal caucus. What makes your two stories different?

Q: When you head back to the Hill, you’ll be an Independent—what’s your plan in working with the Liberal government in this new role?

A: Right now, my focus is here in the riding. I’m going to be spending the remainder of the summer to focus on returning to my work as the MP for Nunavut. Reconnecting with constituents and stakeholders up here. Being an Independent hasn’t lessened my resolve in being a voice for Nunavut in Ottawa. I look forward to continuing to do that.

Q: Your battle with addiction and resignation from the caucus has been front and centre—is there anything else you’d like people to focus on going forward?

A: I think it’s just important for me as an MP, that there’s a lot of things out there that affect people, and the important thing is to believe in yourself and focus on getting healthy and staying strong. I’m committed to my recovery and look forward to continuing on with it.