Maclean's spoke to the new minister of immigration, refugees and citizenship before election day about what would become his new portfolio 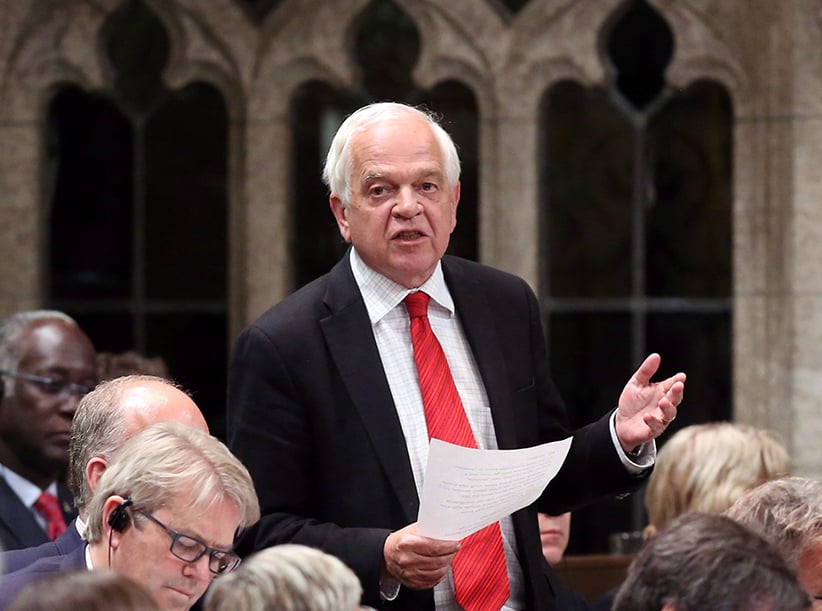 Liberal MP John McCallum stands in the House of Commons during question period on Parliament Hill in Ottawa on  June 11, 2015 (Fred Chartrand/CP)

On Sept. 23, during the heat of the election campaign, Maclean’s spoke with John McCallum, the newly appointed minister of immigration, refugees and citizenship, about whether the Liberal party would proceed with a federal appeal of the Supreme Court of Canada’s ruling that severe cuts made to refugee health care by the Conservative government were unconstitutional. The changes made to the Interim Federal Health program in 2012 drastically reduced the medical insurance provided to refugees who are privately sponsored, or who make a refugee claim upon arriving in Canada—and affected even pregnant women and children. The Syrian migration has reignited outcry over the cuts; many legal and health experts are calling for the program to be reinstated in its original form. The federal appeal was supposed to be heard beginning on Oct. 26, but has since been postponed. What happens next will be largely at the discretion of McCallum. (One small change the Liberals have already made that sends a big signal about how this government is different than the last one: “Refugees” was added to McCallum’s formal title.)

A: Absolutely. I think we are clear on this. We have opposed the Conservative action from the start. We will fully reinstate this program. And indeed, we don’t have a choice, in a way, because the court has already said it’s cruel and unusual and, therefore, unconstitutional. So even with that from the court, the government is still resisting, so we have made it clear from Day 1 that we would reinstate this program. We think it’s unconscionable that the government would impact the most vulnerable refugee applicants in this way. Indeed, they’re shooting themselves in the foot, because it probably ends up costing taxpayers more, because the federal government may save some money, but then, people, if they’re really sick, they’ll go to emergency, then that ends up costing more. So it’s both morally wrong and, as the court says, cruel and unusual, and financially stupid.

Q: What did you think of [former prime minister] Stephen Harper’s characterization of the Conservative government’s role in refugee health care during the federal debate last week, when he said the Conservatives have not taken away health care from immigrants and refugees, that it just removed it from “bogus claimants“?

A: This is a talking point which has been disproven over and over again. I don’t know why he would revert to that. It is simply untrue. We’ve had all the refugee lawyers and doctors involved in this case for many months. It is well documented that there are no so-called bogus refugees. It is refugee applicants, many of whom will have their cases succeed. It is a wide range of people who need our help. As the court said, it’s cruel and unusual not to provide it.

Q: The timing of the federal appeal is interesting. It’s Oct. 26 and 27, so just a week after the federal election. If the Liberals were to win this, how will that play out? What will the Liberal Party’s response be?