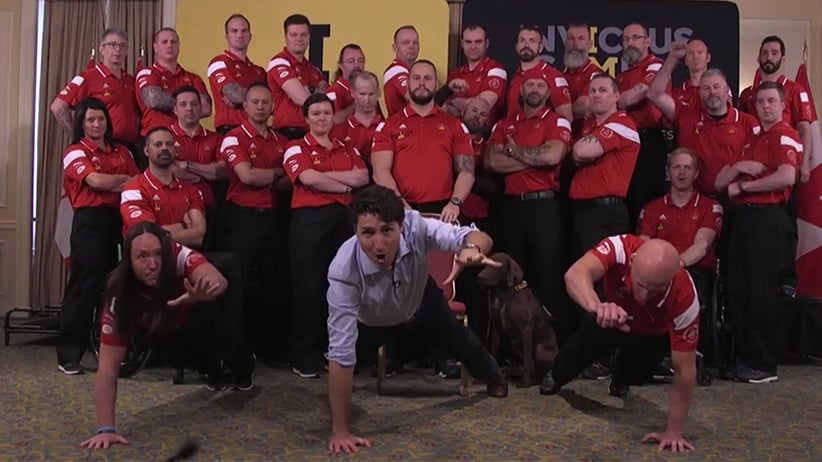 Justin Trudeau’s showy one-armed push-up this week was surely enough to make even the most steadfast admirers of his abdominal tone hold up a white flag of surrender. A video designed to go viral showed the PM join in, and try to trump, a faux-competitive Twitter war between the Obamas and Kensington Palace to promote the Invictus Games founded by Prince Harry. In it, Trudeau is front and centre, relishing the spotlight, surrounded by Canada’s Invictus Games team, comprised of wounded, injured, or sick military personnel or veterans.

Our Prime Minister’s core strength and vigorous physicality have been central to his political brand from the start: winning a boxing match with then-senator Patrick Brazeau was what made people, for the first time, see him as a serious “contender” in the political ring. We’ve seen his mastery of the “peacock” yoga pose in a 2011 photo taken in the Liberal caucus room. And we’ve watched him stage-falling down a flight of stairs in a decades-old video. Likeability is equally a part of his brand, and we’ve also watched Trudeau cuddle (and out-cute) pandas, bromance Barack Obama, and even win over Lin-Manuel Miranda, the creator and rapping genius behind the Broadway sensation Hamilton; after meeting the Trudeaus, he tweeted: “And yes the PM of Canada is delightful. We literally geeked out about Shakespeare for like 5 minutes. I’m in love with him too y’all.”

Trudeau’s personal warmth and his penchant for hugging and selfie-taking his way across the country offered a stark, and much-desired, alternative to the emotionally remote Stephen Harper, a master of political opacity and media control. But our new Prime Minister is turning out to be Canada’s Zelig, less statesman than character destined to pop up at any culturally happening moment: If he showed up on Inside Amy Schumer, who’d be surprised?

But, as with a precocious child interrupting a dinner party to sing the alphabet backwards, what was once adorable, or a breath of fresh air, can became wearying, even cringe-making. That’s what we saw last month when the PM went to New York City to sign the Paris climate change agreement; the media was invited not to a scrum where questions could be asked but to a photo op of Trudeau working out at a Brooklyn gym. Trudeau’s messaging seems to conflate “core strength”—as in abs—with core political values.

Since taking office, Trudeau has proven as adept as Harper, if not more, in controlling his messaging. Tellingly, there was no “rap-off” with Miranda: Trudeau would never submit to a situation in which he couldn’t prevail.

Trudeau’s acutely aware of his own theatrical impact, Marland notes. His book recounts a scene captured by the CBC backstage at his swearing-in ceremony in which he’s staging media imagery: “Getting off [the] bus is such an ugly shot, we’re making sure that they get the walkover from 24 [Sussex],” Trudeau tells his communications director.

The downside, ironically, is the same “cult of the leader” we saw with Harper and see now in the U.S. with Donald Trump. “The more media attention paid to one individual, the more powerful that individual becomes,” Marland says. This would be paradoxical for a leader who has promised government by cabinet and a decentralized PMO.

Another paradox is the Trudeau government’s long-awaited unmuzzling of scientists, announced in November. Yet we’re still not hearing from scientists. Instead, we’ve got the PM reciting quantum-computing basics in answer to a reporter’s question about ISIS that began with a jokey mention of quantum computing. Trudeau hijacked the moment; his eventual answer to the ISIS query has been forgotten; by then, geek history had been rewritten.

At New York University last month, where Trudeau participated in the town hall format he favours, he told students to make leaders accountable. “Young people need to demand more from their politicians, their business leaders, their community leaders,” he said. Yet his own international charm offensive—trips to Washington, Davos, Paris, New York—leaves little time to answer questions in House of Commons, where the political executive is held to account.

It has reached the point where even the media-savvy American President is calling out Trudeau’s hip and hunky ubiquity, albeit in a joke at the White House Correspondents dinner last weekend. “Somebody recently said to me, ‘Mr. President, you are so yesterday, Justin Trudeau has completely replaced you. He’s so handsome, he’s so charming, he’s the future,” the President told the room before delivering the punch line: “I said, ‘Justin, just give it a rest.’ ” A calisthenics-weary nation nods its head in agreement.