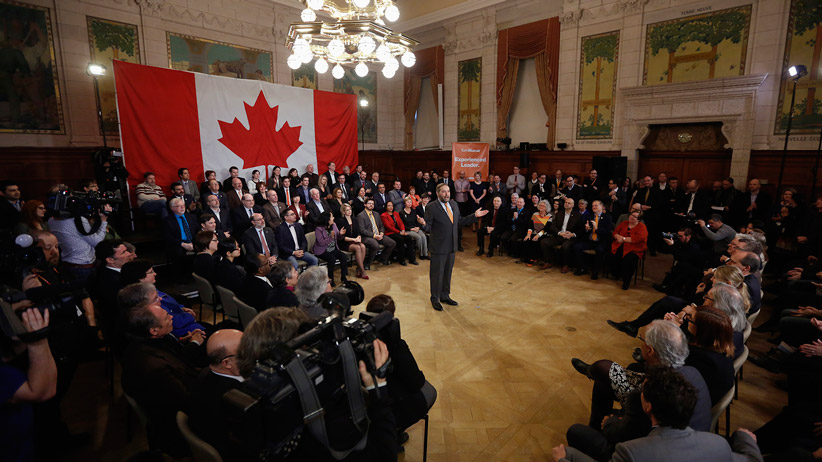 On Jan. 15, Tom Mulcair strode into a committee room in Parliament’s Centre Block, beaming. NDP MPs sat in photogenic rows behind him. More were arrayed in front. A huge Maple Leaf flag hung from the rear wall. TV news cameras recorded Mulcair’s remarks, teleprompters in his line of sight but hidden from the cameras’ field of view. Thus loaded for rhetorical bear, the leader of Her Majesty’s Loyal Opposition delivered a tight, punchy speech making the case for something that would be historic if it happened: an NDP government for Canada.

“In this year’s election, we’ll offer a choice between change or more of the same,” he said. “Child care for young families or more tax breaks for the wealthiest few. Accessible education and training or more student debt and record youth unemployment. Income security for our seniors and veterans or more Conservative scandals and mismanagement.”

Later, of course, most of the news coverage was about Mulcair’s digs against Justin Trudeau, whose Liberals have led in public polls for 21 consecutive months. “Justin Trudeau still believes that he can just inherit power without proposing a thing,” Mulcair said. “My family story is that of millions of Canadian families. Growing up the second-oldest of 10 kids, we had to work for everything we had.”

Mulcair closed by calling for “a Canada where everyone belongs and no one is left behind. This is our offer and this is the choice Canadians have in 2015.” Huge applause. Happy, happy New Democrats.

Except here’s the thing. The choice Mulcair was describing is one he now feels he has sold poorly for the nearly three years he has led Canada’s New Democrats. The speech he delivered “was a mess a week earlier,” one of his advisers confided.

By shaking up his staff and changing his approach to politics, Mulcair has tacitly admitted what New Democrats spent months steadfastly denying: that the party had an awful autumn. That it will be lucky indeed to hold the seats it now has, in an election now only nine months hence. That Tom Mulcair, the oldest and most superbly educated leader of the three main national parties, is the one Canadians know least. And that he is overdue to make big changes if he has any hope of a successful 2015 election.

So, senior New Democrats said in interviews on condition of anonymity, he has begun making those changes. 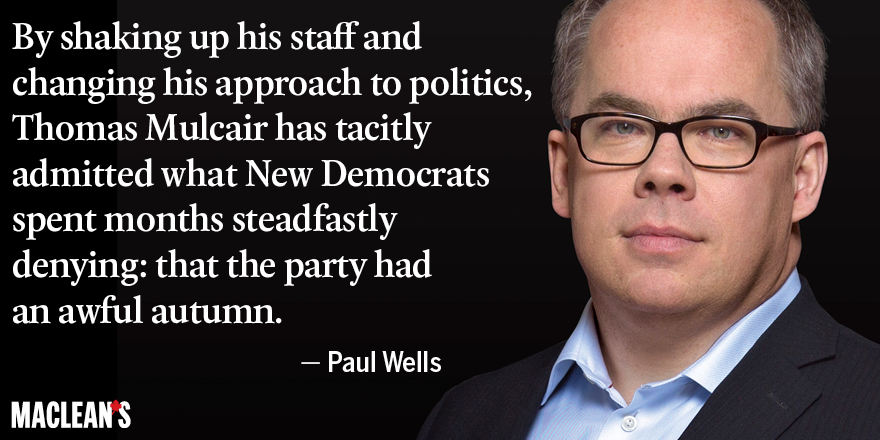 “It’s not exactly like we had a great fall,” one of Mulcair’s advisers said. Since 2013 the NDP has been close to 23 per cent in national voter support in the monthly polling average published by the website ThreeHundred­Eight.com. But a series of messes have dragged the NDP down. This adviser admitted that some issues on which Mulcair put up a valiant defence have indeed hurt perceptions of the NDP. These include the use of parliamentary funds to pay for party offices in Quebec and Saskatchewan and partisan pamphlets mailed to voters; and the shocking, and to a great extent still unresolved, accusations that two NDP MPs were sexually harassed by Liberal colleagues.

New Democrats remain eager to pin much of the blame for these controversies on their opponents and the press. But the fact remains Mulcair spent the autumn navigating through nasty distractions. NDP support has fallen by a couple of points in recent months, which is not the direction it needs to go. Members of the party’s caucus were starting to complain. “There’s always a need for somebody to take the fall,” this adviser said. “And it’s not going to be the leader.”

Hello, now-former Mulcair chief of staff Raoul Gebert. The former president of the party’s Quebec wing was a graduate student when he became Mulcair’s campaign director for the NDP leadership in 2012. “He’s a nice guy,” one senior New Democrat said. Replacing him “probably dragged on longer than it should have,” said another. But unlike Conservatives and Liberals, New Democrats don’t usually have the posh networks that permit them to find soft landings in the private sector or in some appointed post for operatives who need replacing.

Finally, just before Christmas, Gebert himself approached Mulcair and offered to take a small demotion, focusing on the Quebec campaign so Mulcair could bring in a new chief of staff.

That man is Alain Gaul, who ran the financial restructuring and insolvency practice in Montreal for Davies Ward Phillips and Vineberg, a prominent national corporate law firm. (Yes, he’s a bankruptcy lawyer. “We’ll be needing a lot of those if the NDP ever form government,” you might say, except now I’ve beat you to it.) He was also chief of staff to Mulcair once before, when Mulcair was the environment minister in Jean Charest’s Liberal government in Quebec.

In that earlier post, Gaul signalled his willingness to stand up to the boss on the first day. Quebec cabinet ministers are assigned their chiefs of staff by the premier’s office, rather than choosing them directly. Mulcair found out who would be running his office, bristled at the intrusion, and told the new man he wasn’t Mulcair’s own first choice. “Toi non plus, M. le ministre,” Gaul replied. The familiar pronoun “toi” was a nice, acid touch.

If Gaul’s job is once again to speak truth to the leader, another face from the past will help the leader speak. That’s Brad Lavigne, who helped make Jack Layton the party’s leader and helped run all of Layton’s national campaigns. Lavigne left the leader’s office as soon as Mulcair got the top job, but he has returned to the fold, on loan from Hill and Knowlton, as a senior campaign adviser. It was Lavigne who ﬁxed Mulcair’s speech to caucus this month.

Mulcair has had to acknowledge that his strengths—scrumming until reporters drop from exhaustion and pinning back the PM’s ears in question period—are unnoticed by most voters. The annals of politics are full of great talkers who didn’t win elections. One of Lavigne’s goals is to urge Mulcair to stick with a simple, clear message. Lavigne has been down this road before.

Layton was the only party leader with a Ph.D. when he ran his first campaign in 2004. He acted like it: discursive, rambling, distracted by novelty. Lavigne’s 2013 book, Building the Orange Wave, describes the result: “Our message was too complicated for voters,” he writes, and “we’d spread our resources too thin on the ground,” and “our missteps throughout the campaign had us drowning in crisis management that knocked us off message.” Oh, and “our platform, too unfocused and too expensive, had been more about satisfying internal interests than about appealing to voters.”

Layton, Lavigne, Anne McGrath (who will direct the NDP’s national campaign this fall) and others fixed those rookie mistakes. In 2011 Layton’s NDP scored a historic breakthrough, winning 103 seats. That topped the party’s previous high score, Ed Broadbent’s 43 seats in 1988. But 2011 was Layton’s fourth campaign, and 1988 was Broadbent’s fourth campaign. Mulcair doesn’t have four campaigns to figure this out. His decision to remove Gebert and return Lavigne suggests he knows it.

Ofﬁce shakeups are a recent tradition among opposition leaders as elections approach. In 2005, when the next election was closer than this year’s is from today, Stephen Harper made Ian Brodie his new chief of staff and Doug Finley the Conservatives’ campaign director. In 2009, Michael Ignatieff replaced Ian Davey as chief of staff with Peter Donolo. It worked for Harper. Not so much for Ignatieff. Mostly it’s the leader who wins these things, or loses them. Mulcair’s turn is next.