Riding the bus with Justin Trudeau 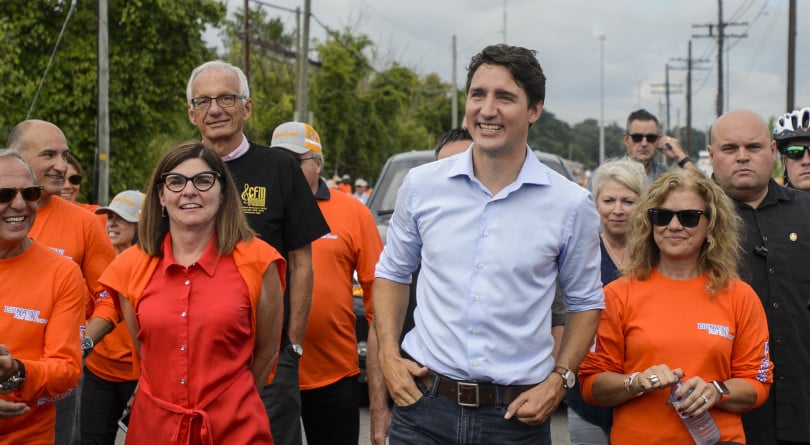 From the first mellow notes of acoustic-guitar arpeggio in the background, to the glimpse of honeyed light catching a church spire behind a streetscape of classic Montréal row houses, the one-minute video Justin Trudeau released this week to effectively launch the Liberal re-election campaign announces itself as a soothingly slick bit of work.

Trudeau is standing on a moving bus in his home riding of Papineau. In keeping with movie-making convention, the other riders don’t notice that he’s breaking the fourth wall. “I got into politics to help people,” he tells the camera, “like the people here in Papineau that I’ve served for more than a decade.”

There’s quite a bit packed into that seemingly simple declaration of purpose. It’s a reminder that Trudeau started out in politics as an ordinary MP—a key element in his story of how being a prime minister’s son didn’t actually pave him an easy path to power. And the assertion that he’s in it for these bus-riding folks pushes back against any recently activated suspicions that he might be more attentive to, say, the troubles of a Montréal engineering corporation’s executives.

The trip continues over the Papineau pavement, as Trudeau’s narration flows above montages of families living their ordinary lives. He’s for “people who work hard to make ends meet, parents who want to make a better life for their kids.” But then, more tellingly, he’s also for “Canadians who want our country to stand for something positive in a world that’s grown darker.”

We hear this mention of worldwide darkness over a shot of Trudeau listening attentively to a guy who’s just off camera. Wild guess: he’s talking about Donald Trump. Conservative Leader Andrew Scheer isn’t all that well-known yet to Canadian voters. But the American president sure is, and he’s deeply unpopular. To the extent he can, Trudeau will run as the antidote to the Trump toxin in the world’s political bloodstream.

But he gets a little more specific than that. He says the Conservatives opposed Liberal measures like raising income taxes on the richest and cutting them in the middle bracket.  He says they’re fighting his carbon tax even though it’s rebated to “put more money in your pockets.” Then this: “The Conservatives like to say they’re ‘for the people,’ but then they cut taxes for the wealthy and cut services for everybody else.”

Canadian voters outside Ontario might wonder why Trudeau’s tone of voice supplies quotation marks around “for the people.” Inside the province, though, most will recognize Premier Doug Ford’s 2018 Tory campaign slogan. Ford’s popularity has since plummeted, and Trudeau wants to make Scheer wear that—especially in some 30 crucial ridings that make up the must-win suburban swath around Toronto.

We’re almost at our stop now. Trudeau is wrapping up: “In October we’ve got a choice to make: keep moving forward and build on the progress we have made or go back to the politics of the Harper years.” He’s already alluded subtly to Trump’s shadow, more pointedly to Ford’s disappointment, and now it’s the former prime minister who gets a strategic nod.

So much territory covered in such a short ride. The Liberal campaign’s main messaging points popped up along the route. Trudeau is for families (not SNC-Lavalin lobbyists). He’s against darkness (it has to count for something that Trump called him “very weak”). If you’re still figuring out Scheer, maybe you know you don’t like Ford (in Ontario) or the memory of Stephen Harper (elsewhere).

Welcome to the Liberal campaign of 2019. It’s wise to take a guided tour to acquaint yourself with the main points of interest at the outset.