Rona Ambrose is out. But how about that Rick Peterson? 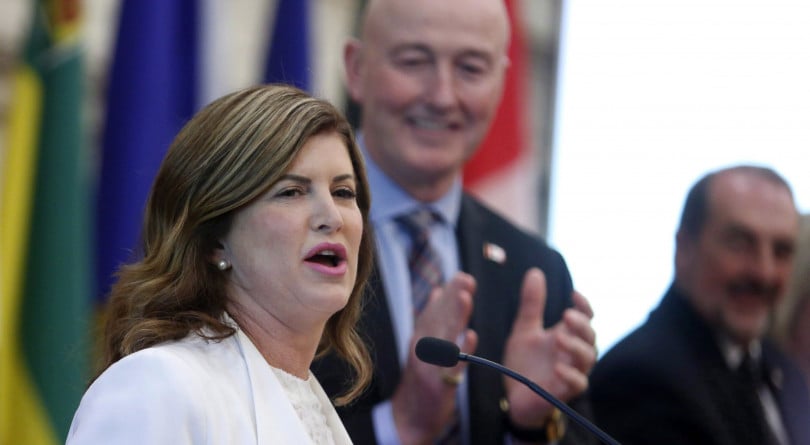 Rona Ambrose, then-interim leader of the Conservative Party of Canada, receives a standing ovation as she addresses the Conservative National Caucus in Ottawa on May 17, 2017. (Fred Chartrand/CP)

Rona Ambrose, a Conservative leadership frontrunner even before she decided to run, finally put a stop to the will-she-or-won’t-she rumour mill. The constant stream of scuttlebutt endured for weeks, and often contradicted itself. First, she was out. Then, she was maybe not out. Now she’s spoken definitively. Ambrose will not seek the Tory leadership. She told her Facebook followers she “struggled” with the decision. For now, though, she’s sticking with the private sector.

The field fills out: Richard Décarie. Derek Sloan. Rick Peterson. These are the latest brave souls to tell Canada they do hope to lead its Conservative party. Décarie is a former Tory staffer who’s expected to mount a social conservative candidacy (which, it’s worth noting, was loudly condemned by party stalwarts after Décarie appeared on CTV News). Sloan is a rookie MP from rural Ontario who wants his party to “stop being afraid to be Conservative.” Peterson is a venture capitalist from Edmonton who ran for the same gig in 2017 and lasted until the third ballot. Good luck, gents.

Parallel universe: The Parliamentary Budget Office confidentially scrutinized 216 promises submitted by the parties during the last election campaign. Today, the PBO revealed a juicy tidbit: only 115 of those promises made the cut in party platforms. That means a whopping 101 fully costed ideas are lost to an alternate timeline forever, never to be debated by us mortals. What could those ideas have had in store? Only a leaker could ever let us know. We repeat, to all interested leakers, that only you can help us now.

Is globalization losing steam? That weighty question is what faces Trade Minister Mary Ng, who sits on a stage at the World Economic Forum this morning (well, this afternoon local time). Just before this newsletter hit your inbox, Innovation Minister Navdeep Bains, sitting on the same panel as Microsoft president Bradford L. Smith, chewed on this toughie: “What are the most pressing governance priorities from trade, economic, safety and security perspectives?” Later today, Bains takes questions from reporters on his days-long dalliance in Davos.

The Kiwis came to town: Yesterday, Defence Minister Harjit Sajjan met with his counterpart from New Zealand, Ron Mark. Sajjan’s deputy minister, Jody Thomas, tweeted that she met her counterpart, too. A naval officer several rungs under Thomas on the military org chart tweeted* back the most stereotypically polite and delightfully curious question imaginable—about org charts, of course. Sadly, Thomas did not reply.

Doug Ford and Stephen Lecce’s sad state of affairs: Michael Coren writes in Maclean’s that the Ford government’s compensation plan for parents is a cynical ploy to bribe families and humiliate unions. Coren pokes holes in the fiscal logic of Tory number-crunchers down at Queen’s Park.

Public education is terribly under-funded, the Ford government appears to be far from committed to its long-term health, and this dispute is more about the future of schools than the salaries of teachers. As such, it’s particularly irksome that the government rejects the unions’ demand for more money to be invested into public education, but is willing to pay up to $48 million a day to compensate parents.

Why it’s getting more expensive for Canadians to fly: You’re not imagining it. The cost of airline tickets is rising at the fastest pace in a decade. Why? “The prime factors driving up Canadian airfares are good times for our economy and very bad times for the Boeing Max 737, say experts.” Read on for all the charts you can handle that explain the trend.

A new national monument: This morning, the National Capital Commission will announce the location of a new LGBTQ+ monument in Ottawa. The Citizen reports the $8-million project will be paid for by a non-profit created in the wake of a class-action settlement with the feds in 2018. A year earlier, Prime Minister Justin Trudeau apologized for the so-called LGBT Purge, which for decades harassed and discriminated against civil servants based on their sexual orientation.

EDITOR’S NOTE, Jan. 23, 2020: The naval officer subsequently, and sadly, deleted the tweet, which had inquired about New Zealand’s apparent lack of a public servant whose title was deputy minister of defence. Indeed, the Kiwi equivalent is secretary of defence—in this case, Andrew Bridgman.