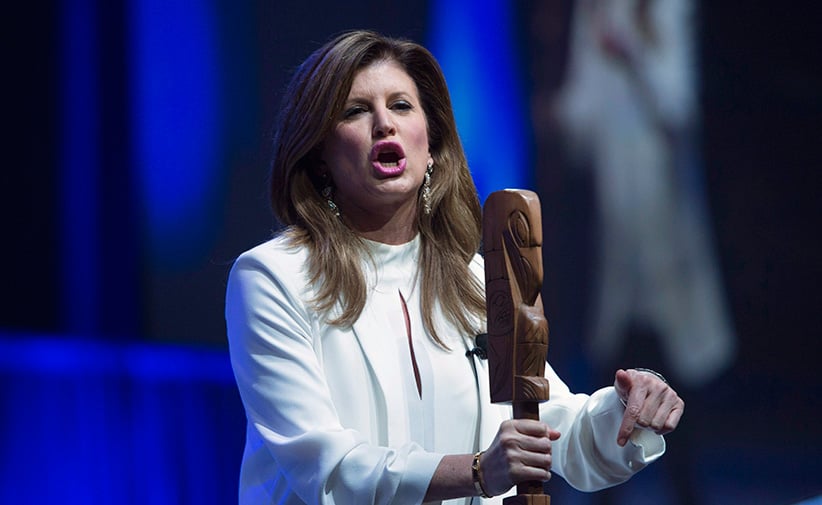 Interim Conservative leader Rona Ambrose holds an aboriginal talking stick as she addresses the audience at the Conservative Party of Canada convention in Vancouver, Friday, May 27, 2016. (Jonathan Hayward/CP)

Hon. Rona Ambrose spoke to Conservatives today at the party’s policy convention in Vancouver. Here are her prepared speaking remarks:

It’s a tremendous honour to be presented with the Talking Stick and a great honour to be here this afternoon. I have a few remarks to make before we start our program, so I’m hoping we can entrust the Talking Stick to someone for safekeeping … Someone known for having a way with words … this give of gab… OH!

Hi Garnet! Garnet Genuis everyone – who holds the record in the House of Commons for the most words spoken this session by a Conservative! (Eds. note: For the record, he’s No. 2.) Garnet, I think I can trust you with this.

Welcome to our fifth family reunion as a united Conservative Party!

I can’t tell you what an honour it’s been to serve as your interim leader.

And I’m proud of what it says about our party.

That’s the thing about Conservatives.

What matters to us is what you have to offer.

We believe the only requirement for success should be an appetite for hard work and belief in yourself. It’s an aspirational message that resonates with millions of Canadians from all walks of life. And it’s why we have the broadest membership of any party.

From students to seniors.

Your support and your energy are what enable this to happen – so on behalf of Canadian conservatives everywhere: Thank you.

As Conservatives, we love our country. We believe in its future. And we place our trust in the talents and ingenuity of Canadians to get us there. Be proud!

We’re the party of Confederation, one of the most durable political arrangements the world has ever known.

We’re the party that bound the country together from coast to coast with the Canadian Pacific Railway, one of history’s most visionary nation building projects.

We’re the party that introduced Canada’s first Bill of Rights, 22 years before the Charter of Rights.

We’re the party of free trade, signing the historic FTA in the face of intense opposition from the Liberals and NDP.

We’re the party that best represents the aspirations of all Canadians, whether native born or newly arrived.

Reflecting the diversity of the country we have the privilege of calling home, we’re the party of the first African-Canadian MP and Cabinet Minister.

— The first MPs of Chinese, Greek, and Japanese descent

— and the first Senators of Filipino, Korean, Pakistani, and Vietnamese descent

Past and present, no party has a better record of bringing Canadians together and standing up for our country’s interests.

This weekend, we will start to write the next chapter of our story.

And friends, we all know that it was only a few years ago that we were not united as a party.

I want you to look around the room – look at the proud Conservative sitting next to you – and think about how far we have come as a Party.

I know that we are not going back there.

That’s not what any of us in this room want to see happen.

Since becoming interim leader, I’ve had the pleasure of speaking with so many of our members.

I’ll be honest, I was a little concerned about the morale I was going to encounter.

It was a close, hard-fought campaign, and I know the result wasn’t what we hoped for.

But after travelling the country from to coast to coast, I was reminded of the strong spirit and optimism of Canada’s conservatives.

After meeting supporters from across this great country of ours, I can tell you this: Conservatives have never been more united, more energized, and more determined.

Wherever I go, the message I hear is the same.

We believe in our values.

We believe in our principles.

We believe in our party.

And we believe with hard work we will win back the confidence of Canadians.

That’s what we’re here to do this weekend, ladies and gentlemen.

In fact, we’ve got three jobs.

First, we need to learn everything we can from each other.

We need to share our experiences to find out what worked last campaign, and what didn’t.

It’s not going to be easy.

We are up against a government that wants to rig our electoral system with a rigged committee so they can win every election in perpetuity.

We will fight them every step of the way.

We will demand a referendum.

When you change the rules of democracy, everyone gets a say!

We’re up against a government that sees no issue with featuring Justin Trudeau in its taxpayer advertising campaign and declaring it non-partisan in the same breath.

An administration that does everything it can to keep Canadians permanently dependent on government programming.

Riding by riding, voter by voter, we need to make the case for a Conservative government and regain the trust of Canadians.

But before we can do that, we need to expand our reach.

Almost six million Canadians cast ballots for our party in the last election.

But obviously it wasn’t enough.

So the second thing we need to do this weekend is remind hardworking Canadians why the Conservative Party is their party.

While the Liberals and NDP cater to elite opinion and shill for special interests, we’re the party standing up for ordinary working Canadians and their families.

We’re fighting for them because we are them!

We are the voice of new Canadians who will come to Canada in the next few years ready to work, only to find a government more concerned with appearances than policy.

We are the Party of young Canadians, who will soon realize that they’ve been handed a Liberal government that is big on promises, and short on delivery.

And our appeal, I want to stress, must include young women.

Trust me, I know this isn’t an easy sell.

Any woman who’s been a lifelong Conservative has heard the same thing: “How can you possibly be a Conservative”?

“It’s the other parties who care about women, not Conservatives.”

Well, no, that isn’t quite true. In fact, that is not even remotely true.

We don’t pass judgment; we provide opportunity and means.

So if you want to be a mom, we will support you.

If you want to work, we will support you.

If you want to do both, we will support you.

What you do is up to you.

We will support you, and that’s why we’re the trailblazers.

So, that’s why we’re the Party of the first female cabinet minister and first woman to serve as acting prime minister, the exceptional Ellen Fairclough.

That’s why we’re the Party of the first woman to lead the Official Opposition, the redoubtable Deb Grey.

And, of course, that’s why we’re the Party of Canada’s first female prime minister, the Right Honourable Kim Campbell!

So Justin – who’s the feminist now!?

Only once we make that case to a new community of voters – and earn that trust – will be ready to win.

Our Party is working hard already to set the foundation to win.

We’ve been working hard to create a “buddy system” where our MPs get paired up with non-held ridings across the country and to make use of our great candidates of record.

We have 3.5 years to rebuild – especially in ridings we just lost (Atlantic Canada) and I know lending some support will go a long way to us winning in 2019.

Second, the Party is about to start rolling out an official supporter program.

This is an online portal where we can get people to sign petitions, show their support or identify what issues are of importance to them.

And we won’t start by trying to sell them a membership or ask for money.

We all know the type of people who would like to hear from us or to be involved — but don’t necessary want to become a member or donor. But we want them to know they are welcome in our Party.

The final thing we need to do this weekend, ladies and gentlemen, is engage in some fresh thinking and debate some new policies.

You know, Conservatives get a bad rap for clinging to outdated notions.

But at the heart of it, what we believe in are not fads, but time-tested truths.

That every woman and man has inherent worth as a human being, and should be free to pursue her or his dreams.

Family is what matters most.

And free markets are what generate prosperity.

We’re absolutely willing to contemplate any and all ideas that advance this triple-bottom line.

The other parties may talk about how much they like people, but they don’t have much faith in them.

Conservatives know that Ottawa isn’t the answer to every question.

We understand that our role isn’t to micromanage the lives of Canadians.

We know that government didn’t invent the iPhone or revolutionize the taxi industry.

What we can do is provide “Peace, Order, and Good Government” so Canadians can do what’s best for them and their families, and in doing so, help build a stronger Canada for all of us.

These are exciting times to be a Conservative, ladies and gentlemen.

You can’t realize long-term success without periods of renewal.

And we’re using this opportunity to reinvigorate our party.

We’re embracing new ideas, while reaffirming our commitment to the values that define us.

And we’re paying tribute to those who built the foundation we stand upon today – the platform from which we’ll launch our Party’s future.

Our party is strong.

And we’re looking forward. That’s the theme of this Convention for a reason.

We have the principles.

We have the people.

And we have the determination and drive.

With your support, we will earn the confidence of Canadians again in 2019!

And not just because we want to.

But because we have to.

And I’ll finish with this.

Standing here as the leader of this incredible Party is one of the greatest honours of my life.

It’s an honour that — come this time next year – will still feel too short.

But I know we will take great strides in that time.

We’re going to have fun over the next few days! In just a few minutes you’ll have a chance to get better acquainted with our Caucus, hear from Leadership hopefuls, and consider some new ideas for our Party.

But make no mistake… The Work. Begins. Here.

We’re going to reach out to every Canadian.

We’re going to debate, to build, and lean on each other.

It’s not always going to be easy.

But we are Canada’s Conservatives. Hard work is what we do, and we do it better than anyone.

I’m looking forward to it. I hope you are too.