Scheer sets a date for his 'real plan' on climate change

Two years in the making, Scheer has said it will be 'comprehensive'. 'We have to show both that we’re getting results, but also what’s motivating us.' 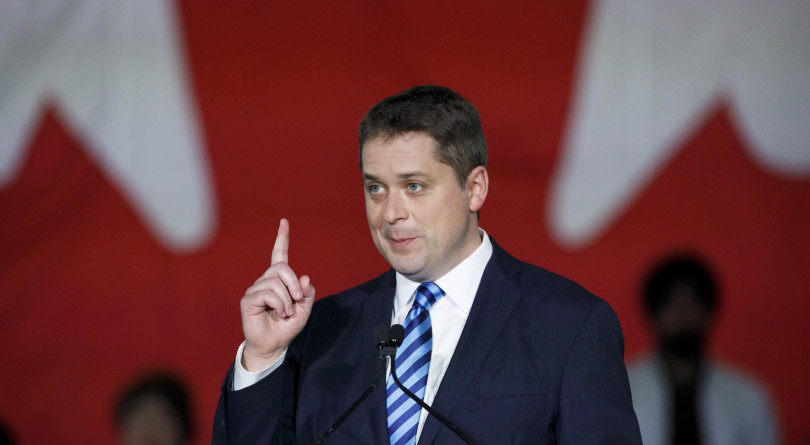 Scheer announces his immigration policy at an event hall in Toronto on May 28, 2019. (THE CANADIAN PRESS/Cole Burston)

Conservative Leader Andrew Scheer released a video message today declaring “Let the countdown begin!” to the release of his party’s long-awaited environment policy on June 19. “This is a real plan that will fight climate change and reduce global emissions without a carbon tax,” Scheer promised.

His pointed reference to “global” emissions hints at an approach that aims to have Canadian policy somehow reduce fossil fuel consumption beyond Canada’s borders. It will be interesting to see how that fits with Canada’s commitment, under the UN’s Paris Agreement, to reduce its greenhouse gas emissions to 30 per cent below 2005 levels by 2030.

Environment Canada notes on its website that the Paris Agreement allows countries to “use internationally transferred mitigation outcomes in implementing their nationally determined contributions so long as [they] report transparently and apply robust accounting rules, notably to avoid double counting.”

Scheer has been asked about his climate change many times since Conservatives elected him to succeed Stephen Harper back in the spring of 2017. In fact, a big applause line in his victory speech that very night in Toronto took aim at Justin Trudeau’s signature climate initiative. “The Liberal carbon tax is nothing more than a cash grab,” he said. “I will repeal it.”

Serious emissions reductions are possible without a tax that puts a price on carbon, if a government is willing to impose ambitious regulations like Norway’s drive toward zero-emissions vehicles or California’s push for zero-emissions electrical generation. Mark Jaccard, the Simon Fraser University climate and energy economist, has framed the policy choices succinctly: “You’ve got to either regulate or price.” But Jaccard, like most serious thinkers on this issue, scoffs at more politically tempting options, like offering incentives for developing new technology.

I interviewed Scheer for this profile shortly after he became Conservative leader. For the record, here is our brief exchange from that 2017 interview on his thinking then about the policies he now plans to unveil next week:

Q: A lot of Conservatives think you need a coherent, saleable climate change plan. Do you think you’ll have one?

A: We will absolutely have a comprehensive environmental plan—

A: It will include Canada’s responsibilities to address climate change, absolutely. But it will also be comprehensive on other aspects of the environment.

Q: What do you think that climate change plan will be? A lot of hard-core economic conservatives would say it needs to be a price on carbon. But you’ve pretty much rejected that. So is it regulation rather than pricing?

A: All I can say is, stay tuned. I agree Conservatives need something relevant, comprehensive, that shows two things. Not only are we showing that we accept that there’s a responsibility for Canada to play it’s part, but that also achieves results. We have to show both that we’re getting results, but also what’s motivating us. The thing that’s frustrating for me is that we’ve always had environmental conservatives that are a big part of this coalition, this party. Brian Mulroney was the greenest PM. The conservation stream that runs through the conservative movement.