Searching for the Liberal Party. Day 3. 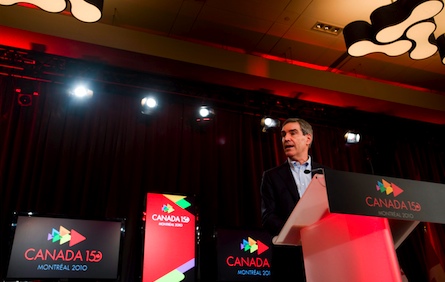 Greetings from Montreal, where, for the next three days, we’ll be hanging around the Liberal party’s Canada 150 conference. Herein a running diary of the proceedings. Day 1’s diary is here. Day 2 is here.

8:33am. Good morning again. The lights are now blue and the subject is The World. Up first is Robert Fowler, the former Canadian diplomat who spent a few months in 2009 as a hostage in Niger. Mr. Ignatieff is briefing his caucus by phone at noon and is then due to speak here at 2:30pm, with a press conference to follow.

8:39am. I arrived at about 8:15am and the tables reserved for media were empty except for three bloggers. Bloggers are like journalists who’ve not yet lost the ability to be genuinely interested in things.

8:42am. Liberal partisan John Mraz argues, quite rightly, that one shouldn’t make too much of yesterday’s carbon tax discussion. Indeed, he says pinning the policy on the Liberal party now would be “somewhat akin to having held Stephen Harper to account for the maddeningly hateful babblings of Ann Coulter.” Unfortunately, the Liberals tried to do exactly that last week.

8:48am. Mr. Fowler is here, officially, to speak about Africa, but he is now spanking the Liberal party. “I believe that the Liberal party has lost its way … and is in danger of losing its soul.” The Liberals don’t stand for principle, they stand for anything that will return them to power. “It’s all about getting to power and it shows.” He applauds this conference as a step in a better direction.

8:54am. He said from the outset that he owes the current government a great debt—his life, even—but that he would be speaking plainly about his views on foreign policy. And he is now. He’s not convinced we deserve to win a seat on the UN security council. He doesn’t think we have contributed much to world affairs in recent years. “The world does not need more of the Canada they’ve been getting.” We’ve been “me first.” Our reputation and tradition has been diminished. We do not understand what we are trying to accomplish in Afghanistan. “We will not prevail in Afghanistan.” We are not willing to make the necessary sacrifice.

8:59am. “Where is the vision thing today? When was the last time a Canadian idea made a difference on the world stage?”

9:04am. He turns on the Middle East and accuses Canada of selling out its reputation for fairness and balance in this regard. He calls out politicians for pandering to various groups and organizations. He speaks in the bluntest of terms about the most sensitive of subjects. If Mr. Fowler has built up a supply of goodwill and respect, he is cashing it in now.

9:20am. Now on to Africa, the great challenges and looming threat of terrorism and violence the continent presents. “Canada should be more present in Africa … a billion Africans depend on countries like ours.” Africa is presented as the challenge and the crisis Canada must address. And with that, he’s done. The audience exhales and applauds.

9:32am. Tim Gartrell of the Australian Labour party is now lightening the mood with his delightful accent and wry observations. If you missed Mr. Fowler’s speech, here is a rough approximation. Mind you, our Andrew Coyne thinks it was “appalling.” I’m of pretty low standards and thus am happy anytime anyone gets up at a political event of any kind and speaks openly and controversially.

9:37am. Gartrell finally gets to the requisite joke about plagiarism.

9:42am. Here is video of Mr. Ignatieff’s interview yesterday.

9:52am. The Conservatives have damned these proceedings as elitist and dangerous and silly. One assumes that Derek Burney, who led Stephen Harper’s transition team in 2006 and was later asked by the Prime Minister to help advise Parliament on the war in Afghanistan and is right now addressing this conference on Canadian relations with the United States, is not meant to take this personally.

10:32am. We resume with a panel on Canada’s place in the world, including Sujit Choudry, Janice Stein and Jeremy Kinsman. The Liberals have distributed Mr. Fowler’s speaking notes, but an electronic copy hasn’t turned up yet. In related news, our Mr. Coyne has slightly amended his previous position on the speech.

11:21am. Peace-making is apparently the new peace-keeping. Adjust your fall wardrobes accordingly.

11:36am. I’ve got to go check out of my hotel before the Hyatt seizes my luggage. One thought before I step away for a moment: you can’t describe this weekend, yet, as any kind of watershed. If, two years from now, the Liberals are in power, this will be regarded as a great turning point. If, two years from now, the Liberals are still in opposition, or worse, this will be a minor footnote. All that said, I don’t see any way this weekend can be described as a bad thing. Taking a few days to think and talk about the country and the world, and the challenges contained therein, seems rather unimpeachable. Actually, it seems like the sort of thing a major political party should be convening on an annual basis.

1:12pm. Business resumes with a speech from Dominic Barton on Asia. Mr. Ignatieff is back in the front row after his conference call with the Liberal caucus.

1:49pm. The last panel of the conference. A collection of eager young leaders in international development. A parting reminder that most of us are quite lazy.

2:05pm. From the Canadian Press account of Mr. Fowler’s speech. If Liberal leader Michael Ignatieff didn’t appreciate Fowler’s frankness, he didn’t let it be known, at least publicly. Ignatieff approached him after the speech, shaking his hand warmly and thanking him for “something this party needed to hear.” “I am very grateful to you,” Ignatieff said.

2:28pm. Right then, enough of that. Mr. Ignatieff’s moment arrives.

2:30pm. The lights go red. Mr. Ignatieff’s glass of water is in place. The podium microphones have been adjusted for his height. The very future of the known universe seems to hang in the balance. And just as soon as the organizers stop boasting about the reaction on Twitter, we’ll be ready to proceed.

2:37pm. “We changed Canadian politics this weekend and it will never be the same.”

2:39pm. “We have to focus on what we must do … We need a national strategy.” Respect provincial jurisdiction, but act together. “A pan-Canadian learning plan … we cannot face the future without it. It is essential.” Early childhood education. Aboriginal education. Deal with illiteracy. Language training. Make higher education affordable and accessible.

2:43pm. “We have an aging population. We have costs increasing every year … and we have families that have been completely crushed by the weight of taking care of children and the elderly … my vision of government is we have to be there for those families.” Manage health care costs. Focus on prevention.

2:50pm. He’s speaking again without a teleprompter and without much attention to his prepared text. And faster than I think I’ve ever heard him speak.

2:51pm. Invest in clean and renewable energies. He continues to stress the idea of a national strategy, the notion of a common purpose.

2:58pm. “How do we pay for this? We can’t be a credible political party unless we have an answer for that.” Promises realistic deficit reduction target: 1% of GDP within two years of taking government. No new spending unless a source can be identified that doesn’t increase the deficit. Freeze corporate income taxes. “We can’t afford them now. There’s too much we have to do to get our fiscal house in order.”

3:05pm. Here is the Liberal release that sets all this out.

3:08pm. Speaks directly to Quebeckers, calls again for unity and shared purpose. Invokes Expo ’67, looks forward to 2017. “We can do so many things but we have to focus on what we must do.”

3:10pm. “This was a moment this weekend in which I think all of us felt renewed pride in being Canadian … it was a moment where, outside of all divergence, the difference … we have changed politics, but we have also changed ourselves. And we’re better for it. Thank you so much.”

3:17pm. There was apparently no prepared text for that. All quotes above should be considered more or less approximate.

4:04pm. The post-game press conference proved relatively uneventful. The Liberals in attendance seem pleased. Back now to Ottawa and the trading of accusation and recrimination.