SNC-Lavalin needed what Jody Wilson-Raybould wouldn't give it

Paul Wells: For two years a remediation agreement was at the heart of the firm's makeover plan, and anyone who read a Montreal newspaper knew it 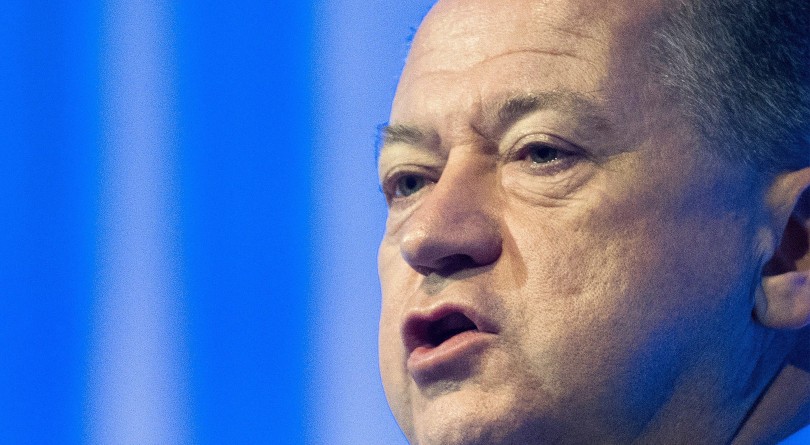 SNC-Lavalin President and CEO Neil Bruce addresses shareholders at the company's annual general meeting in Montreal on Thursday, May 3, 2018. ()THE CANADIAN PRESS/Graham Hughes)

You can’t accuse SNC-Lavalin of being bashful.

Here’s a video the mighty Montreal-based engineering conglomerate posted on YouTube three months ago. It features CEO Neil Bruce, whose Scottish brogue makes him sound right out of the early days of the Canadian Pacific Railway, talking about how SNC helped build Canada. And how “not being invited in to negotiate a remediation agreement is fundamentally unfair to the innocents: The innocent employees, the shareholders, pensioners, supply-chain clients.”

Before I posted this video here, it had been viewed only 217 times since Nov. 1. But if Bruce’s plea for a remediation agreement didn’t capture the nation’s attention, it’s not because he didn’t try. Again and again. For years.

A “remediation agreement” is a newly-legislated mechanism for levying a hefty fine in place of long criminal trials for large businesses. The Globe and Mail says Justin Trudeau’s office pressured Jody Wilson-Raybould, the former attorney general, to authorize such an agreement last autumn. In early October, the Public Prosecution Service of Canada announced that the “criteria” for such an agreement “were not met” and none would be offered to SNC. Wilson-Raybould was shuffled out of her attorney-general post to the less prominent role of Veterans’ Affairs Minister in mid-January. Her replacement, David Lametti, is a law professor from a Montreal riding.

In the video, Bruce hinted that, if SNC was forced into an extended trial for the spectacular cases of unscrupulous practices that had accompanied the company’s business dealings in Libya between 2001 and 2011—$48 million in bribes, $130 million in fraud—it would be shut out of lucrative contracts, jeopardizing 9,000 Canadian jobs and putting at risk the company’s Montreal head office.

It would be a familiar argument to anyone following SNC. In late October the company had bought full-page ads in four Canadian newspapers making the same argument in more detail.

READ MORE: For a commission of inquiry into SNC-Lavalin and the Prime Minister’s Office

“The Government of Canada passed legislation in 2018 to allow companies to settle charges via a remediation agreement,” the ad, also signed by Neil Bruce, said. “And yet the new law is not being made available to SNC-Lavalin for unknown reasons.”

The mere uncertainty of an extended case was dragging the company down, Bruce argued. Ten thousand people had left SNC since 2012.  “Foreign companies with similar issues are able to work freely in Canada and around the world because of such settlement agreements in place in their own countries.” Cutting one of these new-fangled remediation deals would safeguard “public services” and guarantee “more jobs.”

SNC wasn’t merely asking everyone to forget an extended history of reprehensible business practices. It had gone to extraordinary lengths to rehabilitate itself. Since 2012 the company’s board and executive had been replaced. Transparency and accountability agreements had been reached with a constellation of federal and provincial oversight bodies. The incentive was powerful: SNC had become so mistrusted that it risked losing the ability to bid for public-service contracts in Canada.

The last hangover was the Libya trial, which was supposed to start last September. It was delayed for more than a month—excellent news, SNC’s lawyer said, because that would give the company time to seek a remediation agreement under Criminal Code provisions that were only then coming into force.

Then the Public Prosecution Service denied the deal, prompting the company’s CEO to place the newspaper ads and post the YouTube video. SNC stock plummeted, losing $7 in a day and $10 more since then.

For two years, reaching a remediation agreement had been at the heart of SNC’s corporate makeover plan. Neil Bruce had been looking forward to such a thing in public comments since at least September 2016. There was no arrangement for any such thing in the Criminal Code, but Bruce told reporters then, “We know the federal government is examining the possibility.”

Indeed it was. The ability to negotiate remediation agreements rather than proceeding to trial was deep in the omnibus Budget Implementation Act that sought to transform Finance Minister Bill Morneau’s 2018 budget into binding law. Introduced in June of last year, it came into effect only in late September. No potential defendant in a corporate criminal trial has yet escaped such a trial by means of a remediation agreement. They’re too new. SNC-Lavalin thought it would be the first case.

The idea of remediation agreements wasn’t to let companies off the hook, Nathalie Drouin, the deputy minister of Justice, said last June 5 in testimony before the Commons Justice Committee. Rather it was to fashion a hook such companies couldn’t escape. “The measures stem from the government’s desire to hold corporations accountable for wrongdoing and, above all, to prevent further wrongdoing,” Drouin said.

Negotiating a fine in exchange for avoiding a trial would, she argued, “protect victims by allowing for restitution and compensation for harm suffered because of financial crimes.” And it would protect employees who did not engage in the financial wrongdoing of their employer by providing them with court protection.”

(I’m indebted to my formidable colleague Nick Taylor-Vaisey for a lot of this archival reporting.)

MPs weren’t easily persuaded. “It leaves a bad taste in my mouth,” Greg Fergus, the Liberal MP for Hull-Aylmer, told the finance committee on May 8. “It seems we’re going to let off people who would commit a very serious economic crime…. We seem to be letting off people in white-collar crimes with a little slap on the wrist.”

Dan Albas, the Conservative MP for Central Okanagan, agreed. The very sorts of offences that could be covered by remediation agreements, like bribing foreign officials, were “something that [only] someone who is politically connected or at a very high level in business can do.”

SNC worked hard to make its case to every official who would listen. Its lobbyists included William Pristanski, a high-ranking Mulroney-era political staffer, and Bruce Hartley, who had served for a decade as Jean Chrétien’s executive assistant. From the beginning of September to the end of December, 2017, SNC lobbied the Government of Canada 24 times. Two of those meetings were with Mathieu Bouchard, a senior advisor to Prime Minister Justin Trudeau for Quebec. One was with Elder Marques, who was then chief of staff to Navdeep Bains. One was with Julian Ovens, chief of staff to François-Philippe Champagne, who at the time was Canada’s international trade minister. One was with Paul Rochon, deputy minister at Finance Canada. One was with Tim Sargent, deputy minister at International Trade.

So what’s my point? I guess it’s this:

• That for 7 years after 2012, SNC-Lavalin had made a great show of cleaning up its corporate act.

• That from at least 2016, it viewed the possibility of a remediation agreement to forestall a lengthy trial on the Libya fraud charges as a key element of that rehabilitation.

• That the rehabilitation was undertaken, not because of a newfound interest in corporate ethics, but because being able to do business in a Canada where suddenly people were a stickler about this sort of thing was an existential precondition for the survival of SNC-Lavalin.

• That the company was the very opposite of sneaky and underhanded about all of this. The CEO mentioned his eagerness to see remediation agreements written in law in most public statements, beginning two years before the Trudeau government finally made the changes.

• That all of this was covered exhaustively and at length in Montreal newspapers for years.

The only problem was that the Public Prosecutions Service of Canada could not negotiate a remediation agreement without the approval of the Attorney General of Canada. And in October, the AG was Jody Wilson-Raybould. And she didn’t approve.

Two months later, Wilson-Raybould was out of that job and a former Montreal law professor, David Lametti, was in it. On Thursday he assured the House of Commons that he reads Montreal newspapers. So everything I’ve outlined above would have been part of his morning reading for years.

After its October setback, SNC-Lavalin made it clear it would keep pressing for a remediation agreement. In fact, Bruce’s multimedia ad campaign was the opening volley in that campaign. It’s reasonable to assume, I think, that one way or another, the decision Jody Wilson-Raybould made in a way that so upset SNC would have come back to Lametti’s desk. Would have—but probably won’t, now that the Globe story has provoked such intense controversy for the Trudeau government. If the source for the Globe story was SNC, and I have no way to know whether it was, the effect of it is to rather thoroughly cook the company’s goose.

But let’s back up. Did the PMO pressure Wilson-Raybould, and to what extent? Colleagues all over town are working on that, and we’ll know eventually. But if you’d been following this story in the Montreal newspapers, as I wasn’t before Friday morning, you’d really wonder why anyone had to pressure her. A national campaign, a concerted lobbying effort, and saturation media coverage would have provided plenty of pressure. And yet she decided not to provide the needed consent.

Would Lametti need pressuring? Again, I don’t think so: he reads those Montreal papers, whose perspective is so starkly different from that of reporters for the Toronto paper.

One last, not trivial, consideration, for either of Trudeau’s attorneys general or any other conceivable Liberal appointee to that post: The question at hand is whether SNC Lavalin has truly cleaned up its act. The person who must make that decision, in this government, would be a Liberal. And for seven years from 2004-2011, under three successive Liberal leaders, the party was the recipient of $110,000 in illegal campaign donations from SNC-Lavalin employees. The firm reached an agreement to repay the money after the scam was uncovered. But the delicate reality remains: The party that must decide whether SNC is now clean benefited immensely when it was dirty.