So when do we start promoting democracy?

Paul Wells: If the sacking of a capital by forces loyal to a failed autocrat was happening in any other country it's hard to imagine Canadian officials would stay this quiet 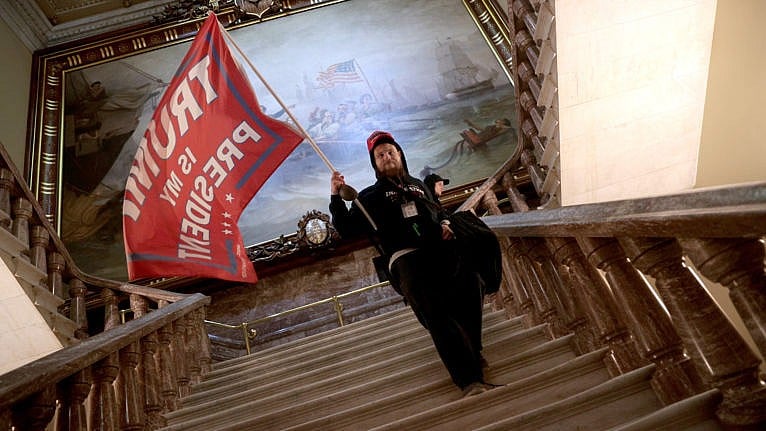 As a mob of idiots descended on the capitol building of the country that sometimes likes to market itself as the world’s leading democracy, to sack it and insist on the maintenance of a president who lost big two months ago, Justin Trudeau got on the phone with Boris Johnson.

I am informed, via one of the Trudeau PMO’s always-reliable communiqués, that the Canadian and British Prime Ministers “looked forward to working together during the United Kingdom’s 2021 G7 Presidency to advance global responses to the pandemic, to promote gender equality, to protect human rights, and to fight climate change. They discussed their shared goal of ambitious progress at the COP26 climate conference the United Kingdom will host in November in partnership with Italy.”

So, nothing about the way their G7 colleague Donald Trump was egging on a mob in a continued and all-consuming attempt to steal an election so Trump could continue to hamper global responses to the pandemic, mock gender equality, suck up to despots and deny climate change.

I thought the world needed more Canada? If the sacking of a capital city by forces loyal to a failed and desperate autocrat were happening in one of the many countries Canada finds easier to patronize—Venezuela, say, or Ukraine, or even India or China—it’s hard to imagine Canadian officials would stay quite this meekly quiet. Perhaps the foreign minister would be on a plane to a third country to discuss options. Or indeed, maybe even marching in the streets of the embattled capital. There’d be sanctions against officials who forgot that their loyalty must lie with rules and institutions, not with cronies.

Instead, until the lurid images from the Senate chamber finally forced comment by Trudeau and other party leaders,  we heard only crickets. Earlier in the months-long post-election descent into chaos, Justin Trudeau did tweet out his congratulations to Joe Biden, the legitimate winner of the recent free and fair elections in the strife-torn regime to the south, and there have been phone calls and preparations for a transition. Opposition leader Erin O’Toole did the same—although, funny thing, when he congratulated Biden via tweet, he didn’t specify what he was congratulating him for. And even then, he was thought too bold by hundreds of his followers, who berated him for endorsing the election results.

I might as well admit that I’m not sure I’m actually serious when I suggest Canada should have made some official statement, at some point since the winner of November’s presidential election became clear, directly endorsing the U.S. electoral process and calling out the shameful attempts to denigrate and nullify its result. It’s easy to anticipate all the obvious objections. These include:

(ii) What goes on in the U.S. is too much of our business, and we mustn’t provoke anyone so close with so many weapons;

(iii) The insurrectionists’ contempt for the world is such that anything that gets said in a pipsqueak country like Canada will only encourage them;

(iv) Why bother? Let the Trumpite base blow off a little steam. Biden will be president anyway. This is ending the way (most people in) Canada would have wanted it to end anyway.

These aren’t ridiculous arguments, even though a couple of them are also directly contradictory. But it’s worth pointing out that most of them also apply in all the corners of the world where Canada never hesitates to poke its nose. And yet I think the nose-poking is a healthy instinct. Because when we speak, we’re not only speaking to our audience. We’re also reminding ourselves what we value by saying it out loud.

One of the first things Stephen Harper did as prime minister in the spring of 2006 was to write, by himself, a statement on the then-latest round of fraudulent elections in Belarus. (Part of his motive was to show Foreign Affairs the kind of language he wished they’d use in such statements.) Harper must have known that even the clearest language in a communiqué from Ottawa wouldn’t change facts on the ground in Minsk. But it’s handy to tell the world, at crucial moments, where our priorities lie, or where we think they should: with institutions over incumbents, with protesters over a thuggishly imposed order, with people who hope over those who want to kill hope.

I think it would have been good if, before Ted Cruz and other panderers sought to join their official voice and their thankfully-limited official power to Trump’s attempted insurrection, Canada and the European Union and, I don’t know, Japan or Australia or whoever wanted to get in the pool had released a joint statement, as central banks coordinate monetary responses to economic shocks. The statement might have said: Democracy in the world benefits when free and fair elections lead to orderly transitions. The United States has usually been a beacon and an example of that simple truth. This must continue. The November presidential election in the United States was free and fair. Attempts to undermine its result are un-democratic and corrosive of the rule of law. We call on all officials, especially the defeated president, to accept the result and work for a peaceful and orderly transition of power.

And since the Prime Minister didn’t see fit to raise such a topic on his calls with colleagues, there would have been nothing to stop opposition MPs from providing a better example. But while Conservative foreign-affairs critic Mike Chong remains properly preoccupied with events in Morocco and China and Iran,  he seems unconcerned by the antics of Ted Cruz and the yahoos invading the Senate chamber in fur vests and camo gear. Erin O’Toole and Garnett Genuis, same deal. Surely it can’t be because, while most Conservative voters accept Biden’s victory and many welcome it, nearly every Canadian who would have joined the yahoos if given the chance is also a Conservative voter. Surely principles obtain even when they’re inconvenient.

It’s delicate to raise such matters, but what the heck; I wonder who John Brassard, the Conservative MP who thought it was clever to shout “George Soros!” when Chrystia Freeland was testifying at committee, thinks is the legitimate president of the United States. I suspect that will still be a good question during the next Canadian federal election campaign, so I might as well start practicing asking it now. I also note that Stephen Harper, the chairman of the International Democratic Union, whose members include the U.S. Republican Party, has had nothing to say on Twitter about the presidential election since it happened. I guess it’s easier when it’s about Belarus.

Back to the Liberals. Trudeau’s mandate letter to foreign minister François-Philippe Champagne urged him to “increase Canadian support abroad for democracy, human rights, international law and freedom of the press.” One of the vehicles for this would be a new “Canadian Centre for Peace, Order and Good Government,” which seems to be a replacement for the defunct and lamented quasi-NGO founded by the Mulroney government and abolished, after a spell of mismanagement, by Harper, that was called Rights and Democracy. But why wait? Does anybody believe the last four years in Washington have been good for democracy, human rights, international law and freedom of the press? Does anyone believe the next four years will be better if people don’t start speaking up for their values? As I say, I have no confidence that most Canadian officials will do more than keep their heads down. I just wanted to make sure we see them.