Sophie Grégoire Trudeau and the mystery of the disappearing hyphen

The approved hyphen has vanished from the name of Justin Trudeau's wife. What remains unanswered is: why? 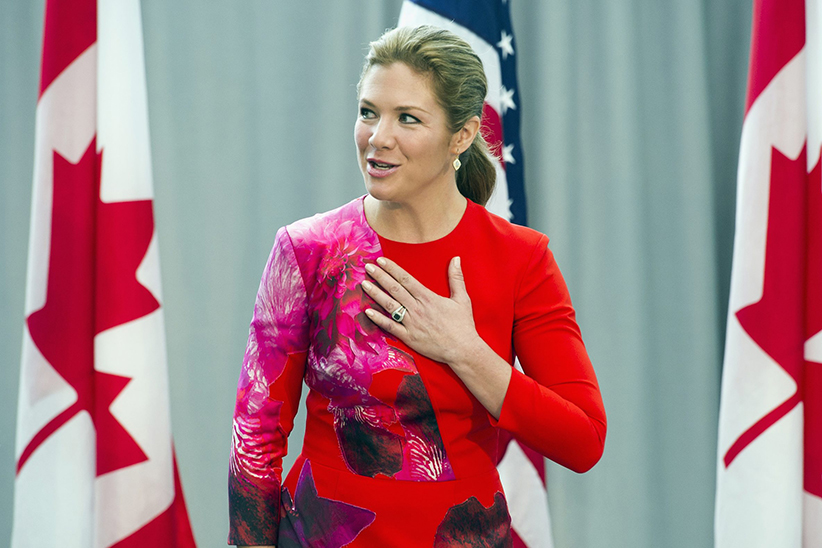 Sophie Grégoire Trudeau, wife of Canadian Prime Minister Justin Trudeau, places her hand over her heart while participating in a program at the U.S. Institute of Peace in Washington, Thursday, March 10, 2016, to highlight Let Girls Learn efforts and raise awareness for global girl’s education. (Cliff Owen/AP)

What’s in a hyphen? Apparently a lot for the wife of Prime Minister Justin Trudeau.

On the weekend, at the end of a series of corrections in the New York Times regarding the official visit by the Prime Minister to the United States, was a rather cryptic one about an erroneous hyphen.

An article on Thursday about the visit of Prime Minister Justin Trudeau of Canada to the United States described the visit incorrectly. It was an official visit, not a state visit. The error was repeated in the headline. And the article described incorrectly the length of a dress that his mother, Margaret, wore to a White House state dinner in 1977, when her husband, Pierre, was Canada’s prime minister. Instead of wearing a formal floor-length gown, Mrs. Trudeau caused a stir by wearing a dress that fell just below — not above — the knee. (The error about the dress was repeated in an article on Friday about Justin Trudeau’s meeting with President Obama on Thursday, and in an article on Friday about the state dinner for him.)

An article on Friday about a meeting between President Obama and Prime Minister Justin Trudeau of Canada misstated one of the elements of the formal arrival ceremony for Mr. Trudeau. It was a 19-gun salute, not a 21-gun salute. The article also rendered the name of his wife incorrectly. She is Sophie Grégoire Trudeau — not Grégoire-Trudeau.

That raised a few eyebrows in the newsroom. For, at the end of the federal election campaign last October, the style arbiters at Maclean’s (including me) noticed that the Liberal party and news organizations were inconsistent in regards to her last name. Some used Trudeau, others Grégoire, while others had variations using both names. Our preference is to use the name preferred by the person. So I asked the magazine’s Ottawa bureau to check with the Liberal party as to which style was preferred by the prime minister-designate’s wife.

The answer was Sophie Grégoire-Trudeau.

That she’s adopted a hyphenated name generated headlines, including this Maclean’s piece by Anne Kingston on the latest example of surname morph in Canadian politics. Since the election we have used that authorized version, as do the main newspapers in Canada: the Toronto Star, Globe and Mail and National Post. And it was used on the Liberal website as late as the end of October.

What’s left unanswered is why? Was the original hyphen an error? Did she try it out for a while and not like it? Why was it un-hyphenated so quietly?

Most Canadians care not a whit about a hyphen. Yet for those of us who keep track of such styles—Jay Z, not Jay-Z, ISIS not ISIL—it’s puzzling. I have asked the PMO and the New York Times for clarification as to style change, and who pointed out the hyphen issue to the newspaper. I’ll update if I get any answers.